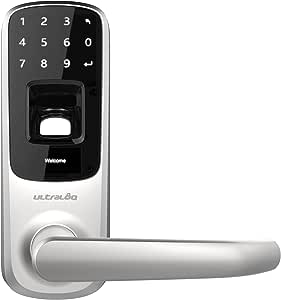 Scott E
5つ星のうち4.0 Not a perfect system, but still worth a purchase
2018年3月16日 - (Amazon.com)
色: サテンニッケルAmazonで購入
I purchased this for my apartment building in December. A few things: first, I don't own the building, but I am a longtime tenant. It is a 7 unit-building with three exterior entrances. The property manager lives in the building and runs the (absentee) owner's company. We live a few blocks off Haight Street in San Francisco, and package theft for items left on the front porch has been an issue. I offered to purchase locks for the exterior doors (all three) if the property manager took care of the installation (and any flak from the owner). Since I plan on staying in the building for a long time, it was an expense that I was willing to bear.

That out of the way, here are my impressions and those of my fellow tenants:

Ease of Setup: 2 stars. It isn't too difficult to set up the Utraloqs on first blush, and it looks like you can quickly copy the setup from one lock to another, but it is actually a pain if you are trying to create entries for multiple users. For our setup, the property manager and I were to be administrators. In my professional life, I have more than a passing familiarity with good security (technical and otherwise) practices, and I also set up a separate user account for both of us (which was good, because the property manager quickly forgot the administrator account that I had set up but had no problem remembering the user account). But for each unit in the building, I had to assign a number to each intended user, because you use the keypad to add all the new accounts and it is numeric only. I had to assign one for each tenant, and not each apartment, because the biometric captures only one finger per user account. Then I realized that some of us (myself included) wanted to record a finger from each hand, to make it easier to use if we were carrying a package, which meant I had to make two user accounts for each person that wanted to record two fingers. And while using the keypad is convenient in that you don't need an app to add users, it is certainly a pain from the perspective of User Interface. It should be noted that there is a place in the Ultraloq App for you to add a name to a user, but more on that below.

Installation: I didn't handle this, a trained locksmith did, but he said it was painless and asked me about the locks, as he may start recommending them to others.

Battery life: 5 out of 5. They have been in use constantly for four months with no issues. Batteries are AA, and I am using AmazonBasics rechargeables without an issue.

Usage - Keypad: 4 out of 5. The keypad stays asleep (and dark) until you need to use it, then it wakes up. You type in your code and press the enter key, which is a symbol (look at the picture of the keypad if you don't know what I mean). I have only had one person that couldn't figure out how to use the keypad, and to be fair, there's no indication that you need to press enter, but everyone else, from delivery drivers to cleaning services, figured it out on their own.

Usage - Biometrics: 4 out of 5. The reader wakes up very quickly, and when it gets it right on the first try, it is amazingly fast. However, your mileage will vary based on the placement of your finger (relative to when you originally recorded it), the weather (if it is cold or very dry, the reader may have more difficulty than during warmer weather), the cleanliness of the reader (obviously, if it is smudged with mud, it won't work so well) and the condition of your chosen finger. One trick that works when it's cold or your skin is dry - touch the surface of your finger to your forehead, then touch the reader, and the additional transferred skin oil aids the reader in picking up your whorls and ridges.

Usage - Bluetooth: NR. Honestly, none of us use this. I tested it and it works, but a sample size of one test use is insufficient for a rating.

Usage - Manual Key: NR. The keys exist for emergencies and should not be used as a regular means of opening the locks. The company says this, our locksmith said this, and they definitely feel flimsy.

Ultraloq App: 2 out of 5. The app exists. It shows you the locks. It works most of the time to open them. It has difficulty maintaining a connection when performing administrative maintenance. It lacks the ability to move most of the administration work from the lock to the app. It *does* keep a security log of who has successfully used the lock and any unsuccessful attempts, as well as administrative logins; however, it is difficult to maintain a connection long enough to download the log. It does monitor rough battery status, but I have found this to be very unreliable.

Right now, I am awaiting the release of the bridges that upgrade the usability of these locks. In theory this will allow me to set certain codes to only work during certain days / times (like delivery drivers) and more easily administer the locks for the building. I purchased three of the bridges, but they have yet to be released by Ultraloq.

In conclusion, despite the fact I didn't just give everything five stars and say the locks are amazing, these are pretty good locks for the money. They do about 75% of what we need them to do, and they work flawlessly about 90% of the time. Not a single tenant has complained about the switch; on the contrary, almost everyone in the building has thanked me for purchasing them for the building. The property manager has left me with the responsibility of maintaining the user database until it's a bit easier, but I don't mind. Most of the delivery companies have no problems using the codes we have given them, with the notable exception of Amazon Logistics (who keeps leaving packages on the porch without even trying the code, but we are working on this) and OnTrac (although we may have them onboard now). If the functionality of the smartphone interface, the ease of adding, deleting, and modifying users, or the enhanced capabilities of the forthcoming bridges were addressed, I would not hesitate to give this five stars. Until then, this is not a perfect system, but I do recommend it.

J Rock
5つ星のうち1.0 Did not hold up after 4.5 months of use. Buyer beware.
2018年12月7日 - (Amazon.com)
色: サテンニッケルAmazonで購入
I bought this product for our home in a beach community. The door and lock are under cover and not exposed to wind or rain at all but are outside under the house. We have lots of friends and family come by so thought this would be a great product. We installed this 7.15.18. In September we had a friend borrow the house and they had difficulty opening the door. Only the admin code worked. Fast forward to 11.30.18 and I go down to let in a repair person. The door would say it would open and would not release the locking mechanism. Tried multiple times, with phone, keypad and fingerprint and it would not open.
I had to call a locksmith in order to have them open which they did, in less then two seconds with a readily available item they were able to enter the house. While further examining the lock I noticed in less then 4.5 months there was noticeable pitting of the metal (please see pictures). This lock would never hold up even if I replaced it with a new one. I had to replace the lock immediately as I couldn’t just live without one.
I contacted the manufacturer and told them of the issue and they said they would replace. I said that I didn’t want a replacement that I would like a refund. Unfortunately their product wouldn’t hold up as it had been only 4.5 months and it fell apart. The declined as I bought through Amazon. Thankfully the people at Amazon took this product back, but I wouldn’t buy again. Their customer service group has something to be desired. Buy this product at your own risk for exterior entry. The fact that it degraded in such a short period of time and was able to be bypassed by a locksmith in under two seconds should give you second thoughts.
続きを読む

Techie
5つ星のうち4.0 It's easy to use
2017年1月3日 - (Amazon.com)
色: サテンニッケルAmazonで購入
This lock is ALMOST the complete package, It's easy to use, has great features. The fingerprint identification is fast, key entry works great, and flawless bluetooth. I love the little perk where you can knock on the phone in your pocket 4 times and the lock will open. I love that it keeps a log of entries as well, and that the keys and fingerprint reader are backlit.

The only feature that this lock is missing, is the ability to send a 'key' to another smart phone, so that you can remotely provide access to a third party. Since the lock already works with my phone's bluetooth, it would seem to be reasonable to expect a software upgrade in the future where the company provides this ability. I should be able to send a 'key' to someone else's phone that would enable their phone's bluetooth to open the lock, similar to what August and others do. I hope to see that feature in the future, which would be the final element to make this lock perfect.
続きを読む
375人のお客様がこれが役に立ったと考えています
レビュー を日本語に翻訳する

jhovudu1
5つ星のうち1.0 Nice design but poor functionality
2018年5月3日 - (Amazon.com)
色: サテンニッケルAmazonで購入
Nice design/build quality. But the fingerprint recognition simply does not work. I use this lock at my office for an employee-only door for about 25 people. We ALL have trouble with the fingerprint scanner occasionally not recognizing our fingerprints and not letting us in. We've tried re-scanning, wiping our fingers, cleaning the glass, etc. The fingerprint access works about 50% of the time, and there doesn't appear to be any rhyme or reason when it works and when it doesn't. Sometimes the same person will fail about 10 times, then on the 11th time (doing nothing different) the lock decides to work. It's become so frustrating that we all just enter our 4-digit codes instead of using our fingerprints -- which entirely defeats the purpose of getting this device. Not sure if the company can come out with a firmware update or not (perhaps the tolerance threshold is too high?) but for now (May 2018), I cannot recommend this product.
続きを読む
130人のお客様がこれが役に立ったと考えています
レビュー を日本語に翻訳する
Amazon.comのカスタマーレビューを見る(1,335) 5つ星のうち3.6
同様の商品をご覧になりませんか？ こちらのリンクで参照ください。スマートロック
Amazonプライム会員ならお急ぎ便、日時指定便が使い放題
さらに、映画もTV番組も見放題。200万曲が聴き放題 。クラウドに好きなだけ写真も保存可能。
> プライムを無料で試す