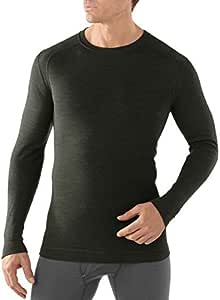 Logan
5つ星のうち5.0 Smartwool beat all...
2015年11月23日にアメリカ合衆国でレビュー済み
Amazonで購入
Best wool base layer shirt out there. I bought this along with the Icebreaker's Oasis, Minus33 Chocorua, Ibex Woolies 1, Sportown Lightweight, and ColdPruf's Enthusiast Polypropylene top. The Smartwool beat all in comfort, look, warmth, and durability. I would then list their rating in the same order as above. The Smartwool has the least amount of itch, almost none, but just enough so I can notice I'm wearing something fuzzy vs. when I'm wearing a cotton shirt, but it doesn't make me want to scratch myself. The Icebreaker's was next in itchiness if worn inside out, but it had so much static out of the box I could hear it crackling and see it pull the hair away from my chest as it came closer to my body; it also didn't fit as well. The Smartwool fits just like a regular shirt, unlike some base layers with different stitch patterns that are supposed to be more comfortable though I do not believe they are. The Icebreaker's has a lower shoulder stitch across the upper back, which made the medium uncomfortable but the large was just a bit too big in general, way too long in the arms. The Sportown had the weirdest/worst stitch pattern of all. Smartwool medium fits perfect for me at just under 6ft about 160lbs, slim athletic build. The Minus33 medium could maybe be tied with the Icebreaker's because it fits just as comfortable as the Smartwool but is a touch too itchy, it make me want to scratch a bit, and though it feels thicker than the Smartwool the Minus33 is rated 230g/m2 vs the Smartwool 250g/m2. (I do love the Minus33 bottoms though, and was hoping the tops would be just as nice but they're a bit too itchy for me) The Ibex was just far too thin to be considered for a winter base layer, maybe as a work out shirt in warmer weather. Oh, and the ColdPruf Polypropylene shirt, it smelled awful, so much so I almost didn't even want to try it on, but I did and it was comfortable, but damn that smell! So I looked into more reviews and returned it right away after reading one review saying, 'it picks up everything except girls and money; hair, odor, lint, everything but girls and money.' So Smartwool has the least itch, doesn't make me want to scratch, most comfortable fit in terms of stitching, tightness/looseness, and arm length, it doesn't pick up lint, hair, or odors (although it doesn't pick up girls and money either), and even though it doesn't seem to be the thickest it does have the densest wool weave of 250g/m2, which should make it the warmest and toughest. Definitely buying more and recommending to others.
続きを読む
16人のお客様がこれが役に立ったと考えています
違反を報告
レビュー を日本語に翻訳する

eM
5つ星のうち5.0 Comfy, Nice fit!
2013年2月1日にアメリカ合衆国でレビュー済み
Amazonで購入
Beautiful fit. Looks great on. Works perfectly for layering as it gently hugs the body. Very comfortable. Keeps you warm or cool - best of both worlds. Will definitely buy another of these.
続きを読む
違反を報告
レビュー を日本語に翻訳する

Jack H
5つ星のうち5.0 Warm and we'll fitting
2017年2月17日にアメリカ合衆国でレビュー済み
Amazonで購入
I originslly bought these to replace poly base layers. The poly got stinky fast and while it kept moisture off my skin it wasn't very warm. I had tried some generic wool base layering before but found it somewhat itchy and not terribly durable. A friend recommended these and I've been using my first set for a few years and they've held up well with no itchiness. This purchase was to have more than one set, as my originals still perform well after much use and many washings.
続きを読む
1人のお客様がこれが役に立ったと考えています
違反を報告
レビュー を日本語に翻訳する
すべてのレビューを参照します
Amazonプライム会員ならお急ぎ便、日時指定便が使い放題
さらに、映画もTV番組も見放題。200万曲が聴き放題 。クラウドに好きなだけ写真も保存可能。
> プライムを無料で試す