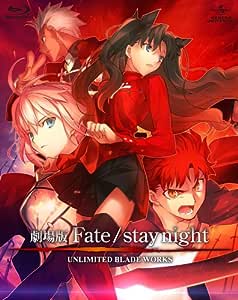 Joshua
5つ星のうち4.0 A very good, condensed version of the UBW series
2018年11月17日に英国でレビュー済み
Amazonで購入
I personally would recommend you just stick to the Unlimited Blade Works series Ufotable made, since there is a lot more meat to the story, characters, action, themes and ideals, as that series is about 10 hours in length (so the pacing and development feels much more natural and it gives you time to breathe), whereas this film is only 1 hour 40 minutes long, so a lot of stuff is crammed into it and the overall product definitely feels very rushed as a result.

However, having said all that, I still really enjoyed this film. The animation was great, the action scenes were intense, the soundtrack was good and I don't think Studio Deen could have done a much better job with condensing the UBW story into a feature length film and they definitely improved the quality of the animation and action, compared to Fate/stay night (2006). At the end of the day, the film is not as good as the series, but if you want to check it out, definitely watch it after Ufotable's UBW Anime.

J. Rodriguez
5つ星のうち4.0 Another entry in the Nasuverse canon
2014年2月10日に英国でレビュー済み
Amazonで購入
Unlimited Blade Works is the second anime adaption of the Fate/Stay Night Visual Novel and this time instead of a full length series it opts for a movie. As a result much of the background is very quickly glossed over, this is a product for the fans and assumes you know most of the background already, not really all that friendly to the newcomer. The animation is solid, most of the English cast return with some notable exceptions and the music is just as good as the series.

I clearly love it so why not five stars. Well this is a double play which has both the DVD and Blu Ray but the extras are mysteriously only on the DVD. The extras themselves are basically a collection of trailers and TV spots, nothing really special or interesting which is the biggest disappointment. Newcomers to the Nasuverse should probably not start here. But if you are a fan it really doesn't matter what I say, you've already bought it.

Brandon Lee Price
5つ星のうち5.0 One thing I love about the Fate series
2015年2月23日に英国でレビュー済み
Amazonで購入
The animation series was a bit lacking in character development, plot and how anyone would act in any of the situations. However; this movie completed it and did it justice. One thing I love about the Fate series, mangas, graphic novels etc were that they have different stories, different lines and outcomes in the series, mangas etc which bring light to characters not mentioned alot and character development looks better as a whole. Visually this movie also was amazing.
続きを読む
違反を報告
レビュー を日本語に翻訳する

Riddles
5つ星のうち4.0 Great film, could have done with being longer
2014年4月24日に英国でレビュー済み
Amazonで購入
I'm not good at writing reviews so I will keep it short and sweet.

The film was pretty good. The darker tone comepared to the Fate/Stay Night series makes it more interesting. Animation is also better than the series and it looks smooth. Much prettier on the eyes.

I watched it with a friend who had not seen the series before and she still enjoyed the film, however she was confused in some area due to the speed the film jumps through events.

All in all, its a good film that anyone can enjoy it.

D. G. Slade
5つ星のうち5.0 Fate Stay Night: Unlimited Blade Works [Blu-ray]
2014年2月3日に英国でレビュー済み
Amazonで購入
If you have the Fate Stay Night series then this is a slightly different view on that series in the end will Shiro be able to pay the price
or will he succeed in obtaining the grail.An excellent film and addition to the fate stay night series.
続きを読む
違反を報告
レビュー を日本語に翻訳する
すべてのレビューを参照します
Amazonプライム会員ならお急ぎ便、日時指定便が使い放題
さらに、映画もTV番組も見放題。200万曲が聴き放題 。クラウドに好きなだけ写真も保存可能。
> プライムを無料で試す