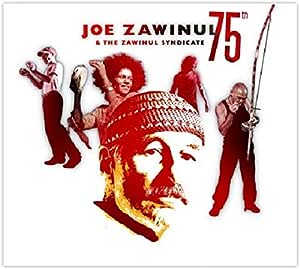 Bodhi Heeren
5つ星のうち5.0 Worthy epitaph for musical genius
2008年12月16日に英国でレビュー済み
形式: CDAmazonで購入
He played jazz and rythm'n'blues, made classical works, was a seminal voice on Miles Davis' groundbreaking jazzrock records in the 60s. And co-led one of the finest, most daring bands ever: Weather Report.

But the last years of his life was mainly devoted to fruitful explorations into world music and a brimming amalgam of African, South American and European music. Playing, like here, mainly with musicians from 'third world' countries.

An important move in a time where the West seems to isolate itself more and more in agressive self-righteousness. And providing him with the inspiration to continue to develop his musical palette to the very end.

This CD, mostly recorded live in Lugano on his 75th birthday, is clear testimony to the brilliance of his vision. The excellent rythm section of the harddriving yet subtle drumming of Paco Sery and bassvirtuoso Linley Marthe, the last, but in no way least, in the long, illustrious line of formidable Zawinul-bassplayers. Add to that a three-piece percussion-section, whose dense and ferrocious playing reminds of another visionary world music embassador, Carlos Santana. The percussionists, among them the beautiful Sabine Kabongo, also add vocal chants. And on top of that the vocoder vocals and wonderfully weird keyboards of the maestro himself, as far out and adventurous as ever.

However awesome the tracks with Zawinul Syndicate are things move to a higher realm when Zawinul reunites with Wayne Shorter for a completely transcendental "In A Silent Way" (recorded in Budapest). To hear these two musical giants reunited again is just as emotional as the recent Cream and Led Zeppelin reunions, perhaps even more so due to Zawinul leaving his body so shortly after.

This is art born out of the eternal, nor aimed at the marketplace but for the more appreciative humanity in a hopefully not too distant future. Let those who have ears hear.

Amazon Customer
5つ星のうち5.0 Zawinul 75th: must-have for Weather Report fans
2009年3月4日にカナダでレビュー済み
形式: CDAmazonで購入
If you're like me, and you have a bunch of Weather Report LPs (or CDs), and you still play them every so often, thinking how wonderful they were, then you owe it to yourself to buy this record and hear Joe and his band, still making great music. There is a nice reprise of Badia and Boogie Woogie Waltz, and a lovely In a Silent Way is grafted in from a Joe and Wayne Shorter get-together at a separate concert, but it's all good.

This is a live recording but the sound quality is impeccable and the performance is electrifying. Those JVC engineers did a great job. Liner notes are sparse, some photos, a short but appropriately elegaic "Thanks To".
続きを読む
役に立った
フィードバックを送信中...
フィードバックをお寄せいただきありがとうございます。
申し訳ありませんが、お客様の投票の記録に失敗しました。もう一度試してください。
違反を報告
レビュー を日本語に翻訳する

S. Baron
5つ星のうち2.0 A sad ending
2008年11月14日に英国でレビュー済み
形式: CDAmazonで購入
I have been a fan of Joe Zawinul sinse 1965, and he has provided me with a great soundtrack for my life sinse then. "75th" is not the way I would like to remember him. I would go as far as to say that, had he not died this would not have been released. Even the combination of Joe and Wayne Shorter, playing "In a silent way", falls short of what you expect from a profesional recording.