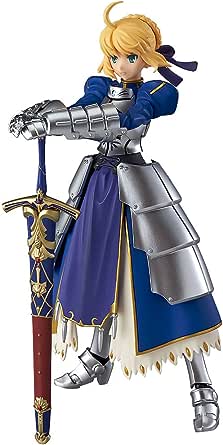 Zac Metcalfe
5つ星のうち5.0 Saber!
2015年4月18日に英国でレビュー済み
Amazonで購入
I wanted this the day I saw it was announced but had no money at the time. I recently got a bit obsessed with buying figurines and bought 2-3 and I'd been looking around for this one but it wasn't available on any UK sites! This was the last one on stock on here (at the time) so I just bought it without even thinking! The Fate series is my favourite anime series in general so I was pretty excited when it arrived! Packaging was good and of course it was the legit version of the figurine, really detailed and really good quality PVC and paint.
続きを読む
3人のお客様がこれが役に立ったと考えています
役に立った
フィードバックを送信中...
フィードバックをお寄せいただきありがとうございます。
申し訳ありませんが、お客様の投票の記録に失敗しました。もう一度試してください。
違反を報告
レビュー を日本語に翻訳する

TsundereLordSuprem
5つ星のうち3.0 Waist
2019年3月31日にカナダでレビュー済み
Amazonで購入
Broke after a year of purchase. The waist can easily get broken so i recommend putting it on a glass display cause this thing is not sturdy maybe its just mine but im giving this a 3 I would rate it 2 but it did last year.
続きを読む
役に立った
フィードバックを送信中...
フィードバックをお寄せいただきありがとうございます。
申し訳ありませんが、お客様の投票の記録に失敗しました。もう一度試してください。
違反を報告
レビュー を日本語に翻訳する

Siege
5つ星のうち5.0 One of My Favorites
2016年10月11日にカナダでレビュー済み
Amazonで購入
I have had this figure for at least two months now and i have had no issues with it what so ever. It is an amazingly beautiful figure that stands out among the others in my collection. In my opinion it is worth the money.
続きを読む
役に立った
フィードバックを送信中...
フィードバックをお寄せいただきありがとうございます。
申し訳ありませんが、お客様の投票の記録に失敗しました。もう一度試してください。
違反を報告
レビュー を日本語に翻訳する
その他の国際レビューを読み込む

Righteous Paladin
5つ星のうち5.0 The King of Knights!!
2018年1月13日にアメリカ合衆国でレビュー済み
Amazonで購入
I'm not much of a fan of the "Fate" series, but what I AM a fan of are knights and knight inspired figures! I knew that there already was a Figma Saber figure before this one, but then again there's a reason that his one is called the "2.0".

Appearance-
Saber looks royally dignified, elegant, and awesome. The royal blue is bold just the way I like it, and has accents of gold here and there. I love the way the silver shines on the armor, and the decorations on her breast plate is quite nice too. Really nice sculpting and proportions as well. I also appreciate that she can be a bad-ass female warrior without having to subject to revealing 95% of her skin with just an armored bikini! Isn't that right...RED SONJA!?

Articulation-
From the head down, the articulation is standard for a Figma figure. However, because this is the "2.0", there have been a few improvements. When Saber does an ab crunch the breast plate moves out of the way on a ball joint, and can be moved back into place when in normal position. She has pop-out shoulders for further butterfly joint range, and her forearms are on swivels. The "bun" on her head can swivel back and forth, and her entire skirt can spread out. The skirt armor can move out separately.

Accessories-
Accessory count is minimal but essential. She comes with the main three pairs, (fists, open hands, grabbing hands), along with one left pointing hand and a pair of hands that are useful for her famous pose. On to the face, she has three faces, (neutral, embarrassed, and battle-face-looking-to -the-right), and separate wind swept hair bangs. She also comes with two swords, that both come with their own scabbards. They are known as Caliburn and Excalibur. Caliburn is more decorative and has a great amount of detail that I really love. Evidently, Saber doesn't use this sword for combat, as it is meant to represent her authority as king. The other sword, Excalibur, is the weapon she uses the most. It's not as fancy, but it does have some cryptic engravings on one side to keep it from looking too plain. It's still a pretty nice looking sword. When you have Saber holding the swords, make sure that they fit as snug as possible, ( without breaking them), so they don' flop around so loosely. By the way, her "Saber pose" works better with Caliburn, because Excalibur seems a bit too tall to pull it off. There is a deliberate dent in her hand that is meant for that type of display. That same hand can also be used to carry the sword by the scabbared. Despite that, I found it a little difficult to keep Excalibur from falling, therefore I used just a touch of sticky tack, (any kind will do), to fix the problem temporarily. Finally, Saber comes with an accessory bag for storage, and the standard Figma stand with extension attachment.

Verdict-
A+:
I absolutely LOVE this figure! It might as well be my most favorite Figma figure ever! If you love the "Fate" series, like knight figures, or just want a good quality figure, treat yourself! She's awesome to look at, sturdy enough for playability, fun to pose, and has great quality all around. I highly recommend her for your collection.

Roy Goh
5つ星のうち5.0 I love this. This is a Figma 2
2015年11月23日にアメリカ合衆国でレビュー済み
Amazonで購入
I love this. This is a Figma 2.0 version of Saber - an upgrade over the previous Figma model. This has deeper more vibrant colours and should be the model a collector would purchase. Please note that this model is an "action figure" with articulate ball joints. The joints are not too obvious while allowing her to be posed in a range of rather aesthetic positions to highlight action or calmness.

As with the other Figma 2.0 models, there are a number of things to be wary about:
1- small parts for her hands and faces. If you've big hands, these parts are "very small".
2- The torso joint has the least range of rotation while carrying the most torque potential. This means this joint breaks easiest and there is no good way to fix it so be careful.

Also note that the shiny metal bits are metallic paint and not actual bits of metal. If you are fussy about quality, I would recommend the Bandai Tamashii model instead - it is about 50% more expensive but boasts upgraded parts. However, the Good Smile Figma 2.0 figure is of excellent quality and should place high on any collector's list.
続きを読む
1人のお客様がこれが役に立ったと考えています
役に立った
フィードバックを送信中...
フィードバックをお寄せいただきありがとうございます。
申し訳ありませんが、お客様の投票の記録に失敗しました。もう一度試してください。
違反を報告
レビュー を日本語に翻訳する