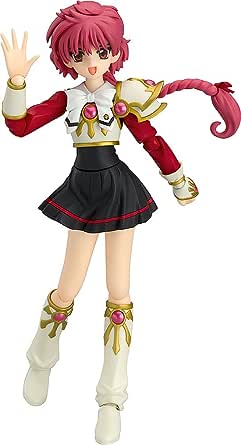 Elizabeth Bárbara
5つ星のうち5.0 Everything was perfect!
2018年7月9日にカナダでレビュー済み
Amazonで購入
It's gorgeous!!! Really cute figure in all the sweet tiny details. The shipping was fast, the box came really secured and I couldn't be more satisfied! Thank you for the good job!
続きを読む
違反を報告
レビュー を日本語に翻訳する

Maya A.
5つ星のうち5.0 In a word... ILoveHerSoMuchAndNowINeedMoreFigmas
2018年4月19日にアメリカ合衆国でレビュー済み
Amazonで購入
This is my first figma, and I'm obsessed. She's an amazing figure! I love Magic Knight Rayearth and it is so difficult to find some of Figma's past models, especially for a reasonable price. While heftier than the original cost, this is still the best price I've found for the Hikaru figure.
[EDIT: the price I purchased this item for was around $80 on amazon prime]

The box was not damaged when I received it, the stickers sealing the box shut were intact, and all items were included in the box. I love that her braid has its own articulated joints so that no matter how you pose her, you can make her braid visible. It makes her poses far more dynamic than many other figmas that I have seen. The hands are a bit tricky to take on and off at first, but with some practice it's definitely gotten easier. I do still struggle with removing her bangs to change her faces out, but just know that it takes patience. Her sword is amazing, and really easy to use. It's lightweight enough that Hikaru can easily hold it aloft at any angle you'd like, which is a definite bonus. My boyfriend builds Gundams and one of the biggest issues he has with them are when their weapons are too heavy for the model to hold up on its own, and I was definitely pleased to see that this wasn't the case with Hikaru! One of the very few downsides is that her skirt isn't very flexible, which limits leg mobility slightly while posing.

The base is great - I have no complaints except that it's best to do the major pose changes off the base and then do the smaller fidgets to her pose after putting her on the base. She isn't securely attached to the base enough to reliably do major pose changes without her falling off, and when attaching her to the base you have to manhandle her a bit, so it's best to wait until after she's attached to do the smaller pose adjustments.

Honestly, I'm pretty obsessed with this figma and have already ordered another one (Ryuko from Kill la Kill!). I'm really pleased with this purchase - I have absolutely no regrets. Well... maybe one regret. I honestly didn't think that this purchase would lead to any other figma action figure purchases, but whoops! I guess I have to track down the other Rayearth figures now...
続きを読む