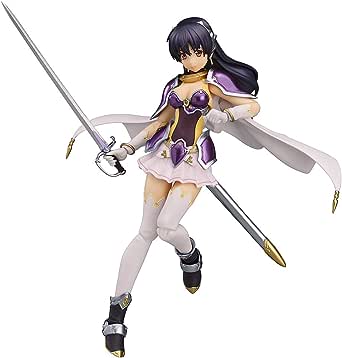 Leonardo Barbosa
5つ星のうち5.0 One beautiful Figma!
2015年4月24日にアメリカ合衆国でレビュー済み
Amazonで購入
I've never heard of Toushin Toshi before but the figure looked really interesting and it was being sold at a good price by an American seller, so I thought, "Why not?"

This is probably the best impulse Figma I bought. Hazuki looks gorgeous! Her stylish black hair, the color and design of her outfit, her cape, and gloves all come together to create a nice silhouette and overall, a nice figure. Her Easter colors (purple and yellow) contrast very well. Her outfit is a one-piece suit and a mini-skirt, with a belt with some armor plating holding the skirt and the purple line accenting the skirt is both simple, yet elegant. It looks both sexy, and cute and evokes a Magic Girl feeling to her.

Articulation, especially on her shoulders, are very good. She can move her shoulders a bit farther than the usual Figma so it's easier for her to reach around things. She can tilt her head, rotate her hands, curl her arms, bend at her knees and hips and she come with a chest joint for extra posability.

Accessories, she come with two face plate: Her smiling face and her serious face. She come with two open hands, two holding hands, two outstretched hands, and two hands meant to hold the saber at an angle. She also comes with the stand and a stand adapter.

The figure has few little nuances to it. First is her hair. First I've seen it, but it has a joint so you can move it up and down and I must say it's a good design choice because we get a nice compromise between form and function. Two strands of her hair are glued to the side so be careful or else you might undo them. She has a golden necklace that wraps freely on her neck. It has peg on the peg that you can sort of connect to her cape. You detach her head and remove the necklace if you're so inclined. Her pauldron+cape are attached together, with the pauldron being attached to furl of the cape with sockets, and you can remove the pauldrons if you'd like. Actually, the cape itself is also detachable and is attached to her back with a peg. DO NOT attach the stand peg to her cape peg. Doing so will enlarge her cape peg and her cape will be very loose. The cape can be moved around because they have sockets. Instead, use the peg on her lower back. She also has a leather holder right beneath the peg to store her scabbard. You can also detach the plating on her hips.

Her grieves can be removed and they come in two pieces: the foot, and ankle guard. The skirt is not too hard, but it's not the softest. You can stretch it out a bit for more leg room, but her front part can only go so much due to the crest of her belt restricting its movement. Lastly, her chest joint. They gave her a small, metallic plate around her chest and this is nice detail because it hides the gap of her chest and abdomen pretty well and its one of those little things that make it great.

On the figure itself. I like it. It's very poseable and beautiful as I've said before, however, putting in the stand peg with the scabbard can be tough because the scabbard is being sandwiched by her cape so you have to tilt her up a bit. The strands of hair came loose eventually, but it's no big deal. The major drawbacks about my figure is that her legs aren't even. The grieve on her right leg doesn't go in as far as her left so her right leg appears to be longer than her left leg. Two. Her left leg is kind of loose. While it's easy to put it back in, posing her in certain ways might be cumbersome due to the leg falling off. Don't worry. There's still enough resistance that it won't be falling off every 5 seconds.

So aside from some QC issues, Hazuki is a nice Figma to have. She's a little plain, only coming with a saber and a scabbard, but she looks so well made that some of my friends thought that she was statue. That's how beautiful she is! Figma's look pretty good but still no way near as close to looking good as a statue but I would say Hazuki comes close to it.
続きを読む
2人のお客様がこれが役に立ったと考えています
違反を報告
レビュー を日本語に翻訳する