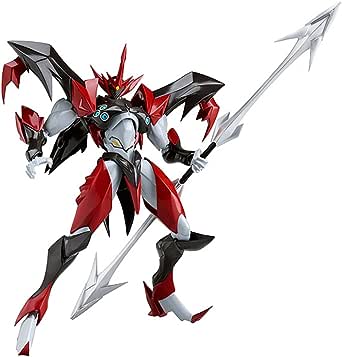 Chun Y. Lee
5つ星のうち5.0 For fans of tekkaman blade
2019年1月2日にアメリカ合衆国でレビュー済み
Amazonで購入
There are not many reviews of this so i figure I would add my 2 cents on this. I loved the tekkaman blade anime and I would say tekkaman evil is my favorite of the two brothers. The figure it self is very tiny than what you would expect and the edges are very sharp. I haven't pulled on the joints too hard since everything is so small I am afraid of breaking these pointy edges by accident. He is pretty easy to pose and as a plus comes WITH the stand . The stand I coulnd't figure out how to use until I just jammed it into his back, it takes some effort the first time you do it. Comes with his lance weapon, can hold it as a dual lance, single lances as well as this multi lance thing that has four lances that he holds onto. I was able to put the lances into his shoulders as seen in the picture which I think looks cooler than using it on his hands. Overall I the thing is very detailed, but I feel a tad flimsy in nature since its so small, skinny and light. I have it set on my display case and when it walk by it kinda wobbles on the stand so if youre afraid of it falling over and breaking maybe consider using 3M or some sort of stablizing thing to stick it onto a surface.
続きを読む

Believe or not, Tekkaman Evil(Twin brother of Blade) really looks better than Tekkaman Blade Figure. The design of the armor it is more sophisticated, in details and parts, looks like a Giant Rhinoceros Beetle mixing with scorpion. Height is approx 125mm, but looks bigger than this. The color finish is great and shine like a real Beetle.

I tried to display Evil and Blade together, but I can't. Evil looks bigger and strong, like a big focal point where Blade disappear from the view. It has more hands, weapons and parts than Blade figure. Is really an amazing figure.

-This figure really is like the photos from amazon.
-The shoulders parts can be separeted from the body and connected with swords to be used in each arm.
-Inlude two lances, one normal and the cross version.
-Include two heads, one with emerald eyes and another with red eyes.
-Inlude five set of hands, plus one more hand in different poses.

This figure is a miniature articulated sculpture. It's very fragile and the painting is delicate too (easy to get fingersprints). It's not a toy for kids.

For the new generations who don't know this anime series, if you decide to see them, please have open mind and little bit of patience. The action in the entire series is not fast like actual anime series (maybe a remake only need 20 o less espisodes), some scenes are repetitive (it was an artistic technique from that age) but it's more focus on combats along the each episode (today more drama, less combat). The artistic style is still excellent and good looking. It has a good story with science fiction concepts from 80's (like Aliens of James Cameron), include a family drama too, the main character(Blade)has to fight and eliminate his family and friends to save the earth from alien invasion. Try to enyoy it thinking in that age (early 90's without digital and 3D FX). And maybe you will agree that it was one of best combat anime series.
続きを読む
1人のお客様がこれが役に立ったと考えています
役に立った
フィードバックを送信中...
フィードバックをお寄せいただきありがとうございます。
申し訳ありませんが、お客様の投票の記録に失敗しました。もう一度試してください。
違反を報告
レビュー を日本語に翻訳する

Jonathan Williamson
5つ星のうち5.0 tekkaman blade!!!
2013年3月3日にアメリカ合衆国でレビュー済み
Amazonで購入
Finally, someone made figures from the kickass anime tekkaman blade. i watched this religiously along with the ronin warriors cartoon and now after a good 20 years i have Tekkaman Evil!!! Excellent sculpt, that's dead on accurate, comes with multiple hand parts and an alternate "awake" head(if you seen the cartoon it makes sense) He comes with his signature lance, that splits apart and can even be posed with his tek-buster pose(again makes sense if you seen the show). The only thing is the figure feels fragile, so be careful and i would say the price is high, but when compared with bandi's line of tekkaman figures, the price is right. If your a fan of the show this is a must buy along with Tekkaman Blade.
続きを読む
3人のお客様がこれが役に立ったと考えています
役に立った
フィードバックを送信中...
フィードバックをお寄せいただきありがとうございます。
申し訳ありませんが、お客様の投票の記録に失敗しました。もう一度試してください。
違反を報告
レビュー を日本語に翻訳する

H. Fabian Calderon
5つ星のうち5.0 It s a joy to watch
2018年12月21日にアメリカ合衆国でレビュー済み
Amazonで購入
It s extremely delicate , I broke his weapons by accident twice. ...fan or not of the tekkaman series....it gorgeous figure to look at, it comes with a stand....much better than Blade
続きを読む

Carlos E. Mejia
5つ星のうち5.0 The seller was wonderful and was so amazing and contacting me straight away ...
2015年7月13日にアメリカ合衆国でレビュー済み
Amazonで購入
As a child of the 80's I grew up on a healthy doze of chocolate puffed rice cereals and anime. Tekkaman blade was a huge influence on me.

The opportunity to own a Tekkaman figures has been realised and this guy will take his place right along his brother battling for the universe on my drawing table.

Von
5つ星のうち5.0 sharp and dynamic figure!
2014年3月26日にアメリカ合衆国でレビュー済み
Amazonで購入
its small, 1/144 size like a gundam. but is soooo more articulate. its awesome you can re-in-act all scence from the show and bring the show in your head back. wish they would make the 2nd form of Tekkaman Evil with the wings and tail. That would make my life complete :)
続きを読む
役に立った
フィードバックを送信中...
フィードバックをお寄せいただきありがとうございます。
申し訳ありませんが、お客様の投票の記録に失敗しました。もう一度試してください。
違反を報告
レビュー を日本語に翻訳する

R. Rodas
5つ星のうち5.0 Amazing really impressive
2016年9月30日にアメリカ合衆国でレビュー済み
Amazonで購入
I love this toy and the cartoon when i was teenager now from my point of view as a collector the detail is perfect comes also with a base to put it on, every detail is nicely done.
続きを読む

Josue Chaves
5つ星のうち4.0 Not as good as Figma's Blade
2014年3月2日にアメリカ合衆国でレビュー済み
Amazonで購入
Lance is a good figure, but not as good as Blade (Teknoman). This figure is a bit thinner and pointier, so it's easier to break and loose joints with it. Harder to pose also because of all the pointy objects it has.

I had a terrible experience with this one. One of his shoulders was broken when received, therefore I had to paste it to pose it with Blade on the very first night I got it. Then, trying to assemble the "X" blade, since it's a bit thinner than the regular one somehow I broke it also and bend it. I fixed it but don't use it for fear or destroying it also. I'm a careful guy btw, believe it or not,

If you want to buy any of the two Figma figures for Teknoman, I strongly suggest to buy Blade, as it looks cooler and it's more poseable and easy to manage than Lance. If, instead, you want to buy the two of them I consider both worthy of their price.
続きを読む
役に立った
フィードバックを送信中...
フィードバックをお寄せいただきありがとうございます。
申し訳ありませんが、お客様の投票の記録に失敗しました。もう一度試してください。
違反を報告
レビュー を日本語に翻訳する