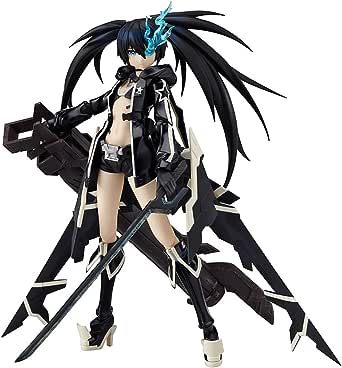 Amazon Customer
5つ星のうち4.0 Very Nice!
2014年10月13日に日本でレビュー済み
Amazonで購入
I have been looking to get this one for awhile now and found this one for a good price.
Definitely glad I bought it here, even through Tenso and international shipping I still saved
ten dollars. The box came in perfect condition and the figure itself is nicely painted very well made.
続きを読む
役に立った
コメント 違反を報告
レビュー を日本語に翻訳する

Mack R
5つ星のうち5.0 Very cool figure - can be a bit difficult to pose with Cannon though
2012年3月15日にアメリカ合衆国でレビュー済み
Amazonで購入
Having been a big fan of the Black Rock Shooter art-style, and Figma's, I was very excited to see this BRS2035 release.

BRS2035 looks a bit similar to the original BLACK ROCK SHOOTER: BRS figma Action Figure which has since gone out of print (and up in price!). If you missed out on the previous release, this one (at the time of this review, while it's still "in print" and at a reasonable price at least) is a nice alternative.

The look of this figure is much edgier than the original Black Rock Shooter figure - everything is a bit more "edgy" than the original, with some changes (such as the wings and barcodes on her stomache).

The wings are poseable (each wing is on a balljoint and has a wide range of movement) - they can also be removed if you prefer.

Like all Figmas, this one has a wide range of movement throughout - waist, head, arms, hands, feet, knees.. it's very pose-able.

2 faces - one is a default with the mouth closed, the other is a screaming, "action" face.
2 hairstyles - This is only the front-piece of the hair - one has the blue-flame, one doesn't.
6 pairs of hands (12 hands) - Ranging from closed fist, to open, to various ones which hold the weapons
1 Sword
1 Hand-cannon
2 bases w/ extensions to hold the figure or cannon (the one for the cannon has a clamp to hold the cannon)

Everything looks great - color, build-quality, likelyness.. my only gripe with the figure comes with the hand-cannon. The hand-cannon works in a way that it has a bar inside that BRS2035 holds onto. Since the hands/wrists have a lot of flexibility and the cannon is so heavy, the cannon immediately weighs down the hand (which is why you get a 2nd base/stand to hold the cannon). Not a total surprise, but disappointing as some of the photos show BRS2035 posed with no stand for the cannon, giving the impression that it doesn't always need one. I would have liked an alternate way of connecting it (maybe if the cannon simply had a peg to attach to BRS2035's arm so it wasn't so loose/wobbly?)
The other issue is that the clamp/claw that holds the cannon doesn't connect to a specific place of the cannon - Figmas are usually designed with grooves, pegs and slots so that everything locks together perfectly and that doesn't seem to be the case here (it's more of a "find an empty place to hook onto" design).

BRS2035 has an hole on her back to connect the other stand to - the stand has a few articulating spots which let you pose anywhere from standing up to "flying" and works great.

When set up, the figure looks fantastic. Again, my only gripe is the cannon and the way it was designed to interact with the figure (it seems like it could have been a little better). all-in-all though, it's a great item to have (I actually prefer it over the original Black Rock Shooter figma) and once it's set up and put in place, the hand-cannon issue isn't a problem any longer (at least until you decide to move it/adjust it next time)
続きを読む
11人のお客様がこれが役に立ったと考えています
役に立った
フィードバックを送信中...
フィードバックをお寄せいただきありがとうございます。
申し訳ありませんが、お客様の投票の記録に失敗しました。もう一度試してください。
違反を報告
レビュー を日本語に翻訳する

calamity89
5つ星のうち5.0 awesome >.<
2012年4月22日にアメリカ合衆国でレビュー済み
Amazonで購入
She came in the mail today! when i got her i had to open the box as soon as possible and OMG HER GUN IS HUGE XD her box was slightly damaged along one side and at the top corner but nothing was broken. Her paint colors are brilliant and very detailed. The fin things that come off the back of her jacket seem kind of thin and frail but ive been playing with them and adjusting them all over the place and i didn't brake anything so i assume they are pretty durable. i love moving her hair around into different positions but be careful (very pointy) i had a little trouble getting her hand on the handle of her gun but with a little hassle and a hole lot of "i hope her hand doesn't snap in half" i seemed to manage it. her hands are actually very durable and i found it easier to bend out her fingers then quickly put the gun in her hand before the hand curled back to its shape. I think thats all i have to offer, i totally love her!!! hope you get one too.
続きを読む
6人のお客様がこれが役に立ったと考えています
役に立った
フィードバックを送信中...
フィードバックをお寄せいただきありがとうございます。
申し訳ありませんが、お客様の投票の記録に失敗しました。もう一度試してください。
違反を報告
レビュー を日本語に翻訳する
その他の国際レビューを読み込む

DaiToday
5つ星のうち5.0 Teen loves this action figure
2013年1月19日にアメリカ合衆国でレビュー済み
Amazonで購入
My girl loved this gift! She and her dad had it out and posing it and taking photos to post to Facebook. The design is quite nice in comparison to some of the past anime action figures I've purchased for her in the past. I love the two accompanying stands that allows the figure to maintain various poses. I'd say this is high quality product and worth the purchase from a collectors perspective...only my girl didn't want to leave it in the box...obviously.
続きを読む
役に立った
フィードバックを送信中...
フィードバックをお寄せいただきありがとうございます。
申し訳ありませんが、お客様の投票の記録に失敗しました。もう一度試してください。
違反を報告
レビュー を日本語に翻訳する

Amazon Customer
5つ星のうち5.0 Holy crap this thing is amazing
2016年5月2日にアメリカ合衆国でレビュー済み
Amazonで購入
Holy crap this thing is amazing. I was honestly surprised that the wings were removable. True the hair took some getting used to when posing, and the gun was massive hand hard to clip. This was still my favorite buy thus far in the years I've been collecting.
続きを読む
役に立った
フィードバックを送信中...
フィードバックをお寄せいただきありがとうございます。
申し訳ありませんが、お客様の投票の記録に失敗しました。もう一度試してください。
違反を報告
レビュー を日本語に翻訳する

Tyler poehling
5つ星のうち5.0 Great product
2019年12月31日にアメリカ合衆国でレビュー済み
Amazonで購入
A great addition to my shelf, the product itself is well made and looks amazing. I can't wait to get more to complete my shelf.
続きを読む