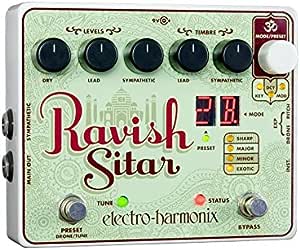 Steve B
5つ星のうち3.0 Ravi-ish!
2018年6月23日に英国でレビュー済み
Amazonで購入
Hmmmmm it doesn’t sound like a Sitar, I used to play a Sitar. Note here that the drone strings on a Sitar are not that constant droning sound you hear at the opening of Indian musical scores. That’s called a Tanpura. They seemed to have joined the two instruments, you don’t often hear the Sitar drones, they are very subtle. Ravi-ish is a good name then!
In my mind you can’t get a decent Sitar simulator period.
However...... I have a Synth ready guitar, and so I use the Sitar from the Roland GR-55 which is also poo poo lol
But then the two together on a subtle setting on the Rav-ish. Yeah that will do!
That’s about as Ravi Shankar-ish as you’ll get that way I reckon, on a budget.
Tip: If you want to sound like a Sitar, go on line and listen to Ravi. Don’t try to figure out what’s he playing just listen to the sounds he makes, he’s kinda speaking through it, see it as a bag of licks if you like. Then, you can find ways to emulate the sounds he makes on your guitar, and then string them all together so they sound GOOD. With GOOD being the criteria here because you ain’t gonna fool no Indians with this.
Don’t just make stupid cliche’d Sitar sounds for the sake of it.
I use my trem for certain sounds, pulling it hard to get a ‘woof and or a wang’ lol, you’ll hear what I mean if you listen to Ravi.
It makes for a new instrument in it’s own right really, I’m adding loads of stuff that a Sitar can’t do, sounds that fit with the overall intention of the Sitar player. And I have to say it’s easier to play this stuff on a guitar, plus you don’t have to spend a million years tuning with wooden pegs. (I can’t play Sitar anymore as I have a problem with my hands, the tendons curl and I can’t get them around a Sitar neck.)
You can do some really cool bending runs with the trem.. fun fun fun.
One day I’ll go to India and blow their socks off... hang on, they don’t have socks, Ravi must have already blow them off, because he sure blew mine.

thinking-time.blogspotdotcom
5つ星のうち5.0 Nice addition
2013年3月3日に英国でレビュー済み
Amazonで購入
But you really need an expression pedal m-audio to bend notes, but it also has its own reverb, if you put the pedal in the other hole you can control its own unique Drone reverb.

A nice edition to my pedal collection, possibly the only unique pedal on the market. Though I know a little bit about playing Raga and I have a Sitar, I did feel more relaxed in a metaphysical way after playing. Lots of YouTube tutorials!

On playing Raga - it is like Jazz but with certain rules on how to move up and down the scale.

This does work well with a ukulele. But I use a good pick up - Schaller Passive Piezo Pickup, to get stereo u need 3.5mm Stereo Jack Socket to 2 x 6.35mm Mono Jack Plugs Adapter Cable, then connect it to a headphone amp or guitar amp.