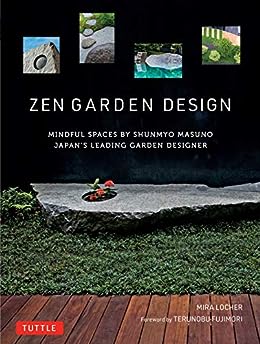 ...a deeper dive into Masunos design process and ideas, so if you're after something that's instructional as well as inspirational then this is [an] option for you. -- Flowers Across Melbourne blog --このテキストは、hardcover版に関連付けられています。

Mira (Mimi) Locher is an architect, educator, and writer working in the U.S. and Japan. She is a graduate of Smith College and received her Master of Architecture degree from the University of Pennsylvania. After working for architecture firms for a decade, including seven years with Team Zoo Atelier Mobile in Japan, she set up an architectural practice with Takayuki Murakami (www.kajikaarchitecture.com). Locher is an associate professor of architecture in the College of Architecture + Planning at the University of Utah, and the author of Super Potato Design, Traditional Japanese Architecture, and Zen Gardens. She is an avid traveler with a keen interest in traditional building crafts and vernacular settlements.

Shunmyo Masuno is the head priest of Kenkohji, a Soto Zen Buddhist temple in Yokohama, as well as the principal and founder of Japan Landscape Consultants. He is a graduate of Tamagawa University and served his garden apprenticeship under the late Saito Katsuo, He founded Japan Landscape Consultants in 1982 and has received numerous awards for his landscape and garden designs, including the prestigious National Grand Prize from the Japanese Institute of Landscape Architecture. He is a professor at Tama Art University and teaches and lectures internationally. Masuno is the author of more than 100 books on the practice and teachings of Zen Buddhism, as well as garden design and landscape architecture.

A native of Nagano-ken, Terunobu Fujimori is an architectural historian and architect and serves as the director of the Edo-Tokyo History Museum. He received his Ph.D. in architectural history at Tokyo University and is emeritus professor at Tokyo University and specially-appointed professor at Kogakuin University. Fujimori has authored numerous books on modern architecture, city planning, street observation, teahouses, and gardens. His architectural projects include the Nira House (Leek House), which won the Japan Art Grand Prix, and the Kumamoto Prefectural Agricultural University Dormitory, for which Fujimori received the prestigious Architectural Institute of Japan Award. He also designs and constructs "free-style" teahouses, including Takasugi-an, and others in Australia, Taiwan, Germany, England, Dubai, Denmark, and India. --このテキストは、hardcover版に関連付けられています。

Shunmyo's rock selection, asymmetry and "gyo" design are unbelievable. He is in a class of his own - beyond mortal.

While the rocks may "speak to" Shunmyo, his works speak to me in volumes.

JFD
5つ星のうち3.0 Zen gardens for the 1%.
2020年9月4日にアメリカ合衆国でレビュー済み
Amazonで購入
It’s a good survey of Masuno’s recent gardens with helpful text and good photos. My problem (and it is mine) is that all the gardens are made for extremely wealthy people (for one garden, all the stones were imported from China) and property developers of luxury condominiums. Not sure what to make of this.

Long story short, I had to return the book. I just couldn't wrap my mind around "mindful spaces" created for the incredibly wealthy. I know that in the past (the Heian and Momoyama periods for example) gardens were built for the elite, and the rich always tend to drive artistic development, but I need to look towards more modest gardens (Muromachi for example) that are better suited to the times we live in.
続きを読む
3人のお客様がこれが役に立ったと考えています
違反を報告
レビュー を日本語に翻訳する
すべてのレビューを参照します
トップへ戻る
Amazonについて
Amazonでビジネス
Amazonでのお支払い
ヘルプ＆ガイド
日本語ショッピングのための言語を選択します。 日本ショッピングのための国/地域を選択します。
© 1996-2020, Amazon.com, Inc. or its affiliates