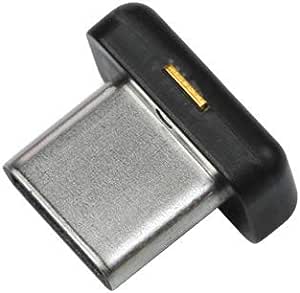 Mr. Niall Douglas
5つ星のうち5.0 Very, very powerful
2020年5月11日に英国でレビュー済み
サイズ: YubiKey 5C NanoAmazonで購入
I won't mince my review of these: these are by far and away the best USB hardware crypto tokens I have every used. They can speak gnuk and ed25519, and thus can do the crypto for all your SSH logins and gpg, including git commits. Because of the hardware capacitive button, leaving them plugged in permanently is not a security risk, as even nation state actors who own your computer cannot physically activate the token. They work beautifully, without driver install, on Windows, Linux, MacOS and even Android and ChromeOS. In short, they are a one stop solution to all of it.

That was the good. There is also the bad: unless you are doing U2P or Fido or something that the installed utility automates for you, expect to spend several hours researching the internet to figure out how to configure these properly. The documentation IS out there, but it's spread around, and there will be a fair bit of head scratching until you figure it out for the actually far more useful use cases which these will do, but for which nobody has automated the configuration for you yet. As much as all the manual configuration with gnuk, including telling the token to enable its capacitive button per gnuk crypto operation, is a pain, once it's done then it's done. The tokens "just work" thereafter.

One major tip I learned the hard way: never buy one of these, always buy at least two. Configure both, and put one of them somewhere safe. Then if you lose the other one, or one breaks, you aren't locked out of *everything*.
続きを読む
10人のお客様がこれが役に立ったと考えています
違反を報告
レビュー を日本語に翻訳する

Helmet
5つ星のうち5.0 Get what you pay for
2019年12月16日に英国でレビュー済み
サイズ: YubiKey 5C NanoAmazonで購入
Works as advertised with great software support from Yubico. It's pretty expensive, but also very sturdy, lives full-time in the side of my MacBook Pro and doesn't bat an eyelid at rough treatment. Built to last.
続きを読む
違反を報告
レビュー を日本語に翻訳する

SHS
5つ星のうち5.0 tiny but very useful
2020年9月28日に英国でレビュー済み
サイズ: YubiKey 5C NanoAmazonで購入
yubikeys are great! i needed a model with the usb-c shape and this one fit the bill. i can easily recommend it
続きを読む

5つ星のうち5.0 tiny but very useful
2020年9月28日に英国でレビュー済み
yubikeys are great! i needed a model with the usb-c shape and this one fit the bill. i can easily recommend it
このレビューの画像