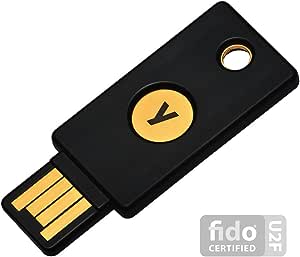 Mr. M. Vieira
5つ星のうち5.0 Everyone should have one of those keys!
2016年11月30日に英国でレビュー済み
Amazonで購入
Being a professional on the information security field, I can't recommend enough the YubiKey. I already have 2 of these keys - one for work related credentials and one for personal use. In conjunction with password managers (I use LastPass), you can guarantee that your 2 factor authentications will make the life of cyber criminals a lot harder. This is an excellent tool to use with websites that has 2 factor authentication. (i.e. Google and Github). There are many other authentication options you can chose from. The only thing is that it does require a bit of experience to set it up as instructions can be found in the internet, but not so easy.
続きを読む
13人のお客様がこれが役に立ったと考えています
違反を報告
レビュー を日本語に翻訳する

Jack Daniels
5つ星のうち5.0 Essential for the security conscious
2017年1月29日に英国でレビュー済み
Amazonで購入
I was a bit dubious about this product when I received it - it was quite expensive for such a small device.

However, the more I use it, the more essential I think it is. Think of it as a physical key to your digital data. It is highly sturdy and dependable. It slips on your keyring and you can forget about it.

The multiple configurations available blow my non-tech savvy mind but I have it set up very nicely. You can't log into my computer unless the key is plugged in - so if someone has my windows password, that isn't enough.

I also have it set up for two-factor authentication for LastPass. Again, to be able to log into my account on a computer, you need my key as well as the password.

Philip Goddard
5つ星のうち3.0 Almost useless because so few sites yet support such devices!
2018年11月27日に英国でレビュー済み
Amazonで購入
A great disappointment, for the only sites that I actually use and which support use of such hardware keys are Facebook, Google and my Windows Live account. I can't even use the key to log into Windows (10 Pro), because apparently Windows Hello is required for that, and said feature is apparently not on my computer, and there appears to be no way that I can get it restored to it. My bank (TSB) doesn't support the key (though at least does have 2-factor authentication, albeit a rather inconvenient method), and PayPal again doesn't. I was particularly wanting to have key authentication with PayPal, but, no way. So, the key has nothing to do almost all the time!

Also my password manager Sticky Password, for which I have a lifetime licence, doesn't support such keys. Stupid! I suppose at some point I'll have to abandon SP for one of the password managers that does support them.

I should also point out that, as others have complained, I found the instructions for setting up the key to work with different sites or programs were confusing, and it was a lengthy business of trial and error to get it set up for the three accounts that I found to support it.

Although the key is a brilliant idea and presumably works fine, I cannot really recommend it at this time, except for people who use far more sites than I do in the list of supporting sites.
続きを読む
4人のお客様がこれが役に立ったと考えています
違反を報告
レビュー を日本語に翻訳する

Edeline Toth
5つ星のうち5.0 The future of security. Get one now.
2018年4月20日に英国でレビュー済み
Amazonで購入
I've been using yubikeys for years and they just work. Virtually indestructible I have one on my keys and it takes all the abuse like water off a duck's back. I secure my windows computer, my encrypted files with yubikey and I use U2F everywhere it's supported on all of my internet logins. Unlike conventional two factor authentication U2F is phishing proof. It's the future of internet security. Get one and learn how to use it. You won't regret it.
続きを読む
7人のお客様がこれが役に立ったと考えています
違反を報告
レビュー を日本語に翻訳する

Customer
5つ星のうち5.0 Amazing, fun, extremely secure.
2017年9月27日に英国でレビュー済み
Amazonで購入
In this day and age you really need to have a two factor device of some kind. The U2F feature inside this (and there's a cheaper blue product of theirs which only has that on and non of the more advanced things) is super easy to use FOR services that use it like google, twitter, facebook and others. You just insert and press the button when prompted and the website sends some data to your Yubikey, it processes it and hands back the result to the site, which can then confirm if it is the same device, aka the one you really have.

Some of the other features are great too, like using their Authenticator program (and app on your phone if you buy the Neo version of the Yubikey or a different one that plugs into a phone by USB C) to store between 28 and 32 different site and services OATH OTP credentials, which are the ones you would normally have to use google authenticator on your phone to deal with.

You can lock your computer with this and ensure even someone knowing your computer password cannot log in or unlock the PC without having your Yubikey also.