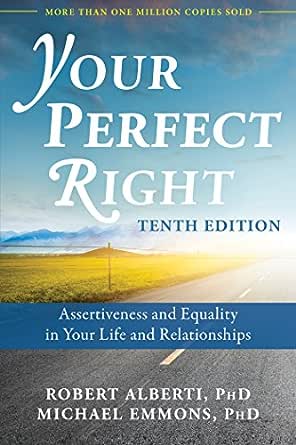 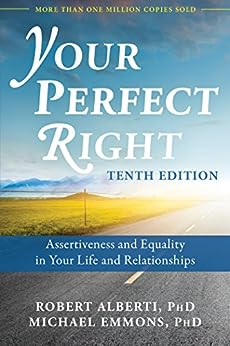 Your Perfect Right: Assertiveness and Equality in Your Life and Relationships (English Edition) Kindle版

"Your Perfect Right is the gold standard ... for self-help."
--Allen Fay, MD, psychiatrist and coauthor of I Can If I Want To

"Filled with a wealth of examples on how to cope with everyday situations ... counters feelings of futility."
--Los Angeles Times

"Five-star highly recommended rating in the national survey ... Some mental health professionals call (it) 'the assertiveness bible, ' they think so highly of it ... this is an excellent self-help book."
--The Authoritative Guide to Self-Help Books

"Not only is it the best book on assertiveness, it sets the standard for self-help books in general."
--Gary Emery, PhD, psychologist and author of Overcoming Depression

"The assertiveness bible: helps the non-assertive speak up and the aggressive, tone down."
--USA Today

"The bible of assertive training."
--Journal of Counseling & Development

"There are many practical guides to assertive living but this is without question, the best."
--Cyril M. Franks, PhD, psychologist and editor of Child and Family Behavior Therapy

"Without a peer in the field ... truly a classic."
--Aaron Beck, MD, psychiatrist and author of Love is Never Enough --このテキストは、paperback版に関連付けられています。

Robert Alberti, PhD, has received international recognition for his writing and editing, which is often praised as the “gold standard” for psychological self-help. Recently retired from a long career as a psychologist, marriage and family therapist, book author, editor, and publisher, Alberti’s now inactive professional affiliations include licensure as a psychologist and marriage and family therapist in California, life membership and fellowship of the American Psychological Association (APA), clinical membership in the American Association for Marriage and Family Therapy (AAMFT), and fifty years of professional membership in the American Counseling Association (ACA). Alberti’s publishing achievements include eight books, newsletters for a number of organizations, dozens of articles, and the editing of more than 100 popular and professional psychology books by other authors.

His “formal” publications career began in 1970 with the first edition of Your Perfect Right, coauthored with Michael Emmons. Now in its tenth revised edition, Your Perfect Right has over 1.3 million copies in print in the United States, and has been published in translation in more than twenty languages around the world. Alberti also collaborated with the late divorce therapist Bruce Fisher on Rebuilding, a best-selling guide to surviving divorce, which has over 1 million copies in print and editions in ten languages.

Michael Emmons, PhD, (1938-2016), was a celebrated psychologist; consultant to educational, government, and business organizations; trainer of marriage and family counseling interns at California Polytechnic State University; and author or coauthor of seven books. Emmons and assertiveness training became synonymous when he coauthored Your Perfect Right with Robert Alberti. Since 1970, he devoted much of his life’s work to furthering and understanding assertiveness. Although his focus on assertive living took center stage, he was an innovator in terms of dealing with the whole person—mentally, physically, and spiritually.

dannyboy4walden
5つ星のうち3.0 Decent primer for assertiveness
2017年8月28日にアメリカ合衆国でレビュー済み
Amazonで購入
Not bad. I can't exactly explain why but this book felt really light and empty...as in it felt like there was no real meat or true content. It was as if the whole book could have been condensed into a 15 page introduction chapter to a book that was really a better manual for assertiveness. But I think I'm in the minority for feeling this way so that's just my personal 2 cents.
続きを読む
13人のお客様がこれが役に立ったと考えています
役に立った
フィードバックを送信中...
フィードバックをお寄せいただきありがとうございます。
申し訳ありませんが、お客様の投票の記録に失敗しました。もう一度試してください。
違反を報告
レビュー を日本語に翻訳する
その他の国際レビューを読み込む

Kimberly S.
5つ星のうち1.0 Painfully tedious read
2019年6月14日にアメリカ合衆国でレビュー済み
Amazonで購入
I was bored bored bored reading this book. I plugged along for about 80 pages and I just can’t take it any more. It was written for an audience that apparently hasn’t experienced life at all. Such gems as:
*different people think and behave differently
*how you say something is as important as what you say.
Any generic meme provides more insight and inspiration than this book.

I’m wondering how it made so many printings and inspired so many people. I’m told previous releases were better. This was painfully dry and dropped my IQ a few points.

Thomas J. Farrell
5つ星のうち5.0 Learning proper assertiveness is important
2019年11月14日にアメリカ合衆国でレビュー済み
Amazonで購入
In the 1970s, assertiveness training for women was popular in the United States – and so were self-help books such as Robert Alberti and Michael Emmons’ 1970 self-help book Your Perfect Right: A Guide to Assertive Behavior (10th revised ed., 2017). The cover of the 2017 tenth edition of their self-help book features the all-caps banner headline at the top saying “MORE THAN ONE MILLION COPIES SOLD” – that is, cumulatively between 1970 and 2017. Translations of its various editions have been published “in more than twenty languages” (page v).

However, for Aristotle, courage is only one of the key virtues that needs to be cultivated – along with the three other key virtues of temperance, prudence, and justice (that is, the personal virtue of justice, as distinct from the legal standard of justice). But Alberti and Emmons do not happen to advert explicitly to any of the other virtues Aristotle discusses.

In the twentieth century, the German American Protestant theologian Paul Tillich (1886-1966) also celebrated the existential virtue of courage in his book The Courage to Be (New Haven and London: Yale University Press, 1952), the published version of his 1950 Terry Lectures at Yale University.

In addition, in the twentieth century, the American Aristotelian philosopher Mortimer J. Adler (1902-2001) published a number of accessible books about Aristotle’s thought, including the book Desires Right & Wrong: The Ethics of Enough (New York: Macmillan, 1991), which goes beyond considering only the virtue of courage – or the virtue of assertiveness in Alberti and Emmons’ terminology.

But the late American self-help author and recovering alcoholic John Bradshaw (1933-2016) captures the complexity of Aristotle’s multi-dimensional thought about virtue in the subtitle of his 2009 book Reclaiming Virtue: How We Can Develop the Moral Intelligence to Do the Right Thing at the Right Time for the Right Reason (New York: Bantam Dell/ Random House). In his lengthy subtitle, Bradshaw is paraphrasing something Aristotle says in the Nicomachean Ethics – something that is not incompatible with what Alberti and Emmons say, but which they do not explicitly say as cogently as Aristotle does.

Even though Bradshaw understands that Aristotle was, in effect, arguing with his former teacher Plato, I want to call attention to the Homeric epic the Iliad as part of the relevant background of Aristotle’s thought about courage. Aristotle lived and taught in Athens during its famous experiment in limited democracy (limited, that is, to male citizens), during which time the Homeric epics still loomed large in Athenian culture.

Now, in the famous invocation of the Muses at the beginning of the Iliad, the singer/poet invokes the help of the Muses to sing about the wrath of the warrior-king Achilles (the Greek term rendered as “wrath” can also be rendered as “rage”). Whatever else may be said about the wrath of the warrior-king Achilles, it does not represent what Aristotle means by the virtue of courage – the supposed mean between the extremes of brashness and cowardice. On the contrary, wrath represents the extreme of brashness. Consequently, Aristotle’s conception of the virtue of courage is counter-cultural, in the sense of countering the widely known Homeric example of Achilles.
We should also note that Achilles is portrayed in the Iliad as a warrior-king. To be sure, there were warriors who were not warrior-kings, but in ancient times, kings were characteristically warrior-kings. Even in the Hebrew Bible, King David is portrayed as a warrior-king.

The archetypes of maturity involved in proper assertiveness (in Alberti and Emmons’ terminology) are the masculine Warrior archetype and the feminine Warrior archetype. But Moore and Gillette also claim that each archetype of maturity involves two “shadow” forms and one optimal form – something akin to the mean between the extremes (used by Aristotle and by Alberti and Emmons). Moreover, according to Moore and Gillette, certain people might oscillate alternatively between the two “shadow” forms of one or more of the archetypes of maturity, but without advancing decisively to the optimal form(s).

Now, the main title of Alberti and Emmons’ self-help book about assertiveness, mentioned above, suggests that they envisioned their readers as people who are stuck in the Masochist “shadow” Warrior forms (in Moore and Gillette’s terminology).

For further discussion of the kind of inner work with the feminine archetypes of maturity that I am referring to here as being involved one’s own personal psycho-spiritual growth and development, see the American humanistic psychologist Jean Houston’s 1992 self-help book The Hero and the Goddess: The Odyssey as Mystery and Initiation (New York: Ballantine Books).

Disclosure: I was in the Jesuits for a time (1979-1987). I did my theological studies at the University of Toronto. However, today I would describe myself as a theistic humanist, as distinct from an atheistic humanist (also known as a secular humanist).

I understand the point of Moore’s characterization of Jesuit training. However, arguably more than anything else Jesuit spirituality fosters deep awareness of one’s own consciousness and learning how to discern carefully about the inner movements of spirits in one own psyche. I would align this kind of inner attentiveness with the Magician archetypes of maturity (masculine and feminine).

Of course, one of the most widely known guidebooks for the Detached Manipulator “shadow” form of the masculine Magician archetype of maturity is Machiavelli’s The Prince (1532).

The American Jesuit psychiatrist and Freudian psychoanalyst W. W. Meissner (1931-2010) explores the kind of inner work with the feminine dimension of St. Ignatius Loyola’s psyche is his 1992 book The Psychology of a Saint: Ignatius of Loyola (New Haven and London: Yale University Press).

Britton Erskine
5つ星のうち5.0 Highly recommend
2019年9月3日にアメリカ合衆国でレビュー済み
Amazonで購入
My psychologist recommended this book to me and I'm so glad he did. It gives you tips and examples that everyone can apply to their life. I've already noticed a change for the positive. Thank you to the authors for writing this book.
続きを読む
3人のお客様がこれが役に立ったと考えています
役に立った
フィードバックを送信中...
フィードバックをお寄せいただきありがとうございます。
申し訳ありませんが、お客様の投票の記録に失敗しました。もう一度試してください。
違反を報告
レビュー を日本語に翻訳する

Darrell Harwood
5つ星のうち5.0 Good self-help book for improving assertiveness.
2019年4月1日にアメリカ合衆国でレビュー済み
Amazonで購入
This book has plenty of anecdotal examples to help understand how assertiveness can improve just about anyone's life. I like that the authors stress that being assertive is not the same as being a jerk. I think anyone would do well to read this book.
続きを読む
3人のお客様がこれが役に立ったと考えています
役に立った
フィードバックを送信中...
フィードバックをお寄せいただきありがとうございます。
申し訳ありませんが、お客様の投票の記録に失敗しました。もう一度試してください。
違反を報告
レビュー を日本語に翻訳する
その他の国際レビューを読み込む