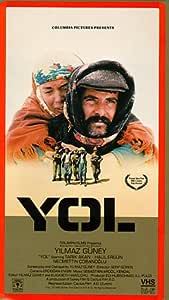 Alan Barysh
5つ星のうち5.0 A great piece of art from a revolutionary communist.
2013年12月29日 - (Amazon.com)
Amazonで購入
This film was made as a totally clandestine project. The script was smuggled out of jail on toilet paper. The author/director was a Maoist and member of the TPKML a Maoist party in Turkey. That being said, this work is a touching film about life for the poor in Turkey and the oppressions of Imperialism-feudalism and islam forced upon the people in general and women specially.
続きを読む
2人のお客様がこれが役に立ったと考えています
レビュー を日本語に翻訳する

Tomaj
5つ星のうち5.0 The Most Touching Movie of All Time
2014年4月2日 - (Amazon.com)
Amazonで購入
A move I watched when I was 11 years old. My father had us watch dense and deep movies, such as Tarkovsky's films, etc. This movie was the most touching of all movies I have ever seen. I have looked for it for 20 years and I just found it on amazon a few weeks ago to watch it again.
I definitely recommend this book for people who like deeply touching movies and have the patience for long scenes.

Massimo Bernabo'
5つ星のうち4.0 Curdish, Turkish, tradition and feelings
2009年6月15日 - (Amazon.com)
Amazonで購入
Yol is the story of five prisoners who are released under condition for a week and come back home to visit their relatives, friends in their villages. Most of the movie turns around the trip home back of two Kurdish guys, one of them will decide not to come back to the prison and join the Kurdish revolutionary army. When arriving home, another of the prisoners finds out that his wife has been sentenced to live together with pigs, as she was found guilty of adultery (or even prostitution) by the guy's relatives. He is asked to kill hner, but he decides to place his trust in God. So, man, wife and their son leaves the village walking to a high pass up on the mountains, the woman clothed only in her light wedding dress. This is the most moving section of the film. We face with a number of different emotions and situations in Turkey ("a prison holding 45 milion people both inside and outside") of the 1970s. The movie was finished by followers of the director (Yilmaz Guney), who himself was able to escape from a Turkish prison and reach Europe, but he died before the movie was finished. He won a prize in Cannes Festival. I recommend it strongly.
続きを読む
10人のお客様がこれが役に立ったと考えています
レビュー を日本語に翻訳する