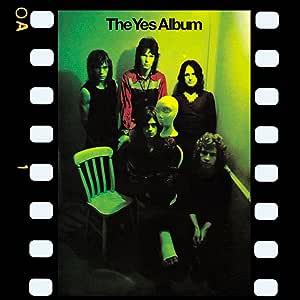 Steve Howe debuted on this 1971 LP, featuring Yes essentials like Yours Is No Disgrace; Starship Trooper , and I've Seen All Good People . Three bonus tracks!

Mark Barry
5つ星のうち5.0 "...Speak To Me Of Summer..." - The Yes Album (2014 Steve Wilson CD/DVD-A Remaster On Panegyric)
2014年10月16日に英国でレビュー済み
Amazonで購入
After the incredible tape transfer and audio restoration work STEVE WILSON of PORCUPINE TREE did on the remasters of KING CRIMSON and JETHRO TULL's early catalogue - the other big Proggy Monster was always going to be YES. And with their 3rd breakthrough record "The Yes Album" from 1971 - man has our Stevie stepped up to the Topographic plate. This 2014 CD and DVD-A reissue is awesome stuff and worthy of the praise so far heaped on it. No harm then in a little more - here are the details that are no disgrace...

BONUS TRACKS:
7. Clap (Studio Version) - the album version is a Steve Howe 'live' acoustic instrumental recorded at the Lyceum in London, 17 July 1970. This is the rare unused 'Studio Version' - at 4:05 minutes it's also longer
8. A Venture (Extended Mix) - the album track runs to 3:19 minutes - this longer version extends towards the end to 4:46 minutes

Disc 2 is the Definitive Edition DVD-A. It's a NTSC Region 0 Hybrid DVD-A compatible with all DVD Players and DVD-ROM Drives. From the visual/audio menu on your television or computer - it allows you to choose from 4 variants of the album as follows:
1. 2014 Stereo Mixes: 24/96 MLP Lossless (tracks 1 to 6 above)

With a gatefold digipak within an outer card wrap - the reissue feels classy right from the off. CD to the left, DVD-A to the right and booklet loose between them - each disc pictures different parts of the albums original artwork while the photo on the albums inner gatefold is beneath the see-through trays. The well-stocked 20-page booklet offers photos of rare 7" picture sleeves from Germany, France, Italy, Portugal and Japan dotted through the text - as well as the original UK LP on the Atlantic Records plum label beloved by collectors (US originals pictured too). There are British and American trade adverts, reel-to-reel boxes and tape files, a white label promo of the LP - even the lyrics to the songs for the first time. SID SMITH gives us superb liner notes on the creation of the album while STEVE WILSON explains about the master tapes and the new Stereo/5.1 Surround Mixes. It's exemplary stuff...

Yet all of that presentation icing on the cake is not what fans are really after - it's the audio. And having listening to "The Yes Album" for 40 years of my life - I'm amazed at the clarity on offer here compared to previous Rhino versions. Some of the tracks are so clean it's almost disconcerting - they're not supressed nor trebled for effect - just treated with care and attention to transfer detail.

As the opener "Yours Is No Disgrace" goes into that Chris Squire Bass break - it's so good - and that Howe solo still amazes. Listening to the rather dry and somehow uninspired `studio' cut of "Clap" - it's easy to see now why they chose the live version - there's just something extra in the playing that lifts it up into the realm of special. There's real muscle now in the swirl of "Starship Trooper" and "Wurm" kicks in - Wilson captures the build up and spread across the speakers perfectly. As opposed to the album version - I have to say that I'm loving the `Extended Mix' of "A Venture" with its loose and funky King Crimson finish - Yes tripping out. But if I was to single out just one track where the audio improvement is magnificent - it's the Side 2 opener "I've Seen All Good People". It's layers and beautiful arrangements are even more magical now - and those fantastic vocals by Jon Anderson - genius. I have a friend who has his stereo rigged to his television's surround kit - and I can't tell you how utterly brilliant the 5.1 version sounds - wow! I'm going to have to bleeding invest-damn! I thought the `Alternate' version of the album was interesting if not a tad gimmicky - but I don't if it's just that I'm too used to the original (relistens methinks)...

I can imagine that nowadays there's probably a queue of Prog band's sat outside Steve Wilson's front porch clutching bags of master tapes - hoping to catch his eye as he exits for a latte. And on the strength of this groovy reissue - I can totally understand why...
続きを読む
42人のお客様がこれが役に立ったと考えています
違反を報告
レビュー を日本語に翻訳する

Monifieth Housewife
5つ星のうち5.0 Timeless. Classic. Amazing Musicians. This album is nearly 50 and is still Fantastic ...
2017年6月17日に英国でレビュー済み
Amazonで購入
Classic YES. Of course it is and it's just brilliant stuff and is timeless. Well I think it is. I am kinda stuck on Starship Trooper. It's so fabulous. I think I might have been brain washed with this album as a child as my brother played it constantly. Everything on it is so familiar and somewhat comforting, like your favourite jumper that you can't possibly part with. The LPs of old are probably in an attic somewhere but glad I could replace everything with CDs. This is definitely not one I will use as a coaster - that's for sure. These are top notch, fantastic, musicians - nuff said I think.
続きを読む
11人のお客様がこれが役に立ったと考えています
違反を報告
レビュー を日本語に翻訳する

Philip Wheal
5つ星のうち3.0 5:1 Porridge
2019年4月17日に英国でレビュー済み
Amazonで購入
Bought several of SW's new 5:1 surround mixes of both Yes and King Crimson. The music is timelessly epic so no probs there. Some of the greatest heights rock has ever achieved. The 5:1 mix sucks. It feels disjointed and jarring in places. While it's great to hear many musical phrases with greater clarity it sometimes comes at the expense of the flow of the music. Guitar or keys leap out of the mix or are occasionally too quiet or weird use of reverb and other effects on the voices make it jar with the music. The original was quiet simple, almost like a live performance. This gets too complicated. Love all his 5:1 with Crimson and most other Yes but not this one.
続きを読む
3人のお客様がこれが役に立ったと考えています
違反を報告
レビュー を日本語に翻訳する

Sebastian Palmer
5つ星のうち5.0 Starship Trooper! Nuff' said...
2013年3月4日に英国でレビュー済み
Amazonで購入
I'm just another voice in the Halleluwah* chorus, it would appear. Like the Yes catalogue as a whole, this album is varied, and - for my money - not entirely consistent. But neither of these things is a bad thing per se. The first is a strength, and the second is just reality.

Anderson's extremely distinctive vocals, and his unusual melodies and harmonies, are great. So too is the way that the band as a whole can continually recast his melodies via different backings. Chris Squires' bass combines intelligent restraint with a rare kind of musical muscularity, achieving a tastefulness inversely proportional to his sartorial choices (I say this having just watched Symphonic Live... those leggings!). And Bruford's drumming? Well, he was to get ever cleverer, but never so straightforwardly compelling.

People have written copiously on all aspects of Yes, and there's plenty of other reviews here to read, so other than these scant observations I just want to note that, for me, I'd probably give this five stars even if everything except Starship Trooper was utterly awful. Of course it isn't, and that's a bonus. But hearing Starship Trooper - and in fact I'm only referring to the opening Life Seeker portion of the song - was, and remains, an enduring 'magic moment' for me. Some pieces of music really can have an almost magical cathartic effect. I hesitate (unlike Anderson these days) to use the word spiritual, fraught as it is, but hey, it fits! Listening to the Life Seeker section of Starship Trooper, ideally through a good system and loud enough to be immersed fully in the sound, is nothing short of transcendental for me. So, erm... thanks guys!

At the time of writing this gem is selling on Amazon for £3! And that's the expanded/remastered version. If you think the current state of popular music is just peachy, you might find the music on this disc baffling. If, on the other hand, when confronted with the state of popular music these days you think, surely there must be more? The answer is, Yes.

Anglian Traveller
5つ星のうち5.0 Enter Howe, the result a resounding `Yes'
2012年12月8日に英国でレビュー済み
Amazonで購入
Released in January 1971, the third album from Yes is now seen as a timeless rock classic which marked a step change in style & imagination from the band's competent but unremarkable first two albums. `The Yes Album' also marked the replacement of founder-member guitarist Peter Banks (who fell out with Jon Anderson over the excessive use of orchestration on the `Time & a Word' album) with the truly brilliant Steve Howe, whose compositional input, technical skills and seminal playing in no small way contributes to this album being an outstanding piece of work, and who was to become one of the defining cornerstones of the unique `Yes sound'.

Other reviews have offered excellent song-by-song commentaries of the album, so that won't be repeated here. However some general impressions stand out. First off, this band ROCKS; it's first & foremost a rock group, which plays with feel and passion. The keyboard mix pre-dates Rick Wakeman's joining by a few months so the moog makes only an occasional appearance, Tony Kaye supporting the melody principally with electric organ and piano. The overall sound is a guitar-rhythm section-vocal rock band spiced up with interesting compositional arrangements, great dynamics, vocal harmonies and some experimental pieces like `Perpetual Change'. The band finally seems to know what it's doing and where it's going, its distinctive sound beginning to emerge.

You can hear Chris Squire on this album starting for the first time to use the bass guitar as a lead instrument, where rather than simply work with the drummer to underpin the rhythm, he offers a complimentary melodic structure to the guitar & keyboards, bringing an intelligence and complexity to the music rarely found among contemporaries.

Above all, `The Yes Album' is bursting with energy. The opener `Yours is no disgrace' is one of the all-time great rockers with its distinctive tight opening bars moving into a driving riff, Kaye's organ work giving the impression of trying to constrain the energy of the rhythm section as Howe's choppy, wailing guitar offers bursts of sound as counterbalance to Anderson's equally energetic falsetto-register multi-tracked vocals.

On the `expanded & re-mastered' release you get the original album, plus as bonus tracks single versions of `Your Move' & `Life Seeker' - the first part of `Starship Trooper' - & a studio version of `The Clap', Howe's solo acoustic guitar piece (a live-audience version was included on the original `Yes Album' to spotlight the band's new guitarist). Though the better-known live `Clap' is good, many listeners will agree the studio version has the edge.

Overall `The Yes Album' though perhaps just a little bit rough at the edges and lacking the compositional complexity characteristic of subsequent `Yes' releases, showcases a tight, powerful & melodic rock band which has found its voice and distinctive style. To quote Bill Martin: "The Yes Album inaugurates `The Main Sequence', a term from astronomy for when a star begins to shine at full strength for a long period of time. The star called Yes was already there in the sky but suddenly we noticed it, and we could not look away."