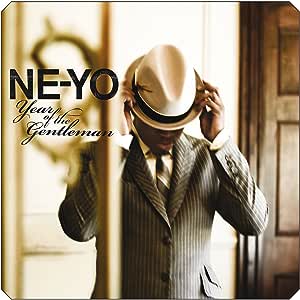 Year of the Gentleman CD, インポート

"Closer," written by Ne-Yo and produced by Stargate, is the first single from Ne-Yo's upcoming third album, YEAR OF THE GENTLEMAN, set to arrive in stores June 24th. It is the follow-up to Because Of You (released May 2007), which received this year's Grammy Award for Best Contemporary R&B Album, and In My Own Words (February 2006) - both of which debuted at #1 on the Billboard 200 and R&B/Hip-Hop Albums charts.

In addition to his Contemporary R&B Album award, Ne-Yo earned four other Grammy nominations this year, including two for his collaboration with Rihanna, "Hate That I Love You" (which he co-wrote), namely Best R&B Song and Best R&B Performance Duo/Group; as well as Best Male R&B Vocal Performance for his #2 hit "Because Of You"; and Record of the Year for Beyoncé's "Irreplaceable" (which he co-produced). Ne-Yo's Grammy recognition followed up the UK's 13th annual MOBO (Music Of Black Origin) Awards in September 2007 - the only televised European Awards Show solely dedicated to urban music and culture - at which he won for Best Song ("Because Of You") and Best R&B Act.

Ne-Yo's RIAA platinum debut album In My Own Words was nominated for a Grammy as Best Contemporary R&B Album. It spun off three chart-topping hits, starting late-2005 with his debut Def Jam single, the #1 Grammy-nominated "So Sick," followed by "When You're Mad" and "Sexy Love." Ne-Yo capped 2006 as Male R&B/Hip-Hop Artist of the Year at the Billboard Music Awards. At the The 21st Annual Soul Train Music Awards in February 2007, Ne-Yo won the Coca-Cola Award for Best R&B/Soul or Rap new Artist for "Sexy Love."

If the mark of the skilful Lothario is the one who knows to always tell his lover what she wants to hear, surely Def Jam’s R&B sensation Ne-Yo--aka Los Angeles singer-songwriter Shaffer Chimere Smith--is one of the greatest of them all. On his third album, Year of the Gentleman, Chimere channels his hitmaking talents into a suite of R&B songs that are more respectful than rampant in their approach to the romancing. “Single" is a song that reaches out to all the lonely girls,  Ne-Yo promising, “I'll be your boyfriend til the song goes off," while the Stargate-produced “Miss Independent," lit up by neon synthesizers, suggests Smith isn't too concerned with his own machismo to test out flipping the traditional gender roles, serenading a girl who's a player in her own right: “Everything she got, you bet she bought it." The album is at its best with the central, two-song movement of “Why Does She Stay" and “Fade Into the Background"--the former finding Ne-Yo questioning his own neglectful nature over a backdrop of shimmering keys, the latter a sombre piece that finds our narrator accepting the news that his lover has found another with a rare, heart-rending magnanimity. --Louis Pattison

Vincent E. Martin
5つ星のうち3.0 A Few Good Tracks, But Sophomoric Lyric Kill This Effort
2010年11月22日にアメリカ合衆国でレビュー済み
Amazonで購入
Bottom-Line: No one could credibly argue that Ne-Yo lacks style, the man could be the poster child for the slickly dressed young Black man, but his lyrical palette could use some refinement.

In the world of R&B music, there is a void; an all-too-obvious lack of credible, intelligent music that so defined the genre in its heyday in the 50 years leading up to this decade. The R&B or Soul, of yesteryear was written by masters of their craft. Now what we are being handed--with a few notable exceptions--is a body work that lacks soul and meaning. Yes, you can dance to it, but where is the deeper, soulful meaning?

Such is the case with Ne-Yos' Year of The Gentleman (2008). On the surface, the CD is a wonderful blend of danceable tracks and slow ballads that adhere to the contemporary layered approach to music. But lift the musical hood and the lyrics that should underpin the music are Sophomoric at best and insulting at worse. At times I found it hard to believe a grown man was singing!

Don't get me wrong Year of The Gentleman is not all bad, the opening track Closer is smart, blending strong backbeats and passable lyrics. The song was designed as a dance number and it accomplishes its goals quite nicely. And track No. 5 Miss Independent, buoyed by neon synthesizers, is another well put together dance track that lacks lyrically, but has an infectious back beat that's hard to resist.

But the CD nose dives musically between the two tracks with Ne-Yo endlessly crooning on about how much a gentleman he is despite his self-professed flaws. Indeed, if the hallmark of modern day Romeo is a man who knows when, where, and how to tell his lover what a loser he is then surely Def Jam Records R&B man-of-the-moment Ne-Yo (a.k.a. -Los Angeles based 28 year-old singer-songwriter Shaffer Chimere Smith) can safely wear the crown announcing him as one of the best, if not the best of them all.

While Babyface waxed eloquent about love and relationships, Ne-Yo, who had a hand in all of the songs on Year of The Gentleman, his third release, manages to wax ineloquently about the same subject. For instance on track No. 3 Single Ne-Yo notes that the woman's boyfriend left her alone but not to worry "I'll be your boyfriend til the song goes off," and "you don't got to be alone, I'll be your boyfriend." Track No.6 Why Does She Stay, follows along the lame lyrical stripe, with lines like: "she hates that I don't do dishes, even though I mess up the most, and she begs me all the time to help her, I know that I should, but I'm lazy, so I don't." Seriously!

Perhaps the lyrical underpinning the Year of the Gentleman can be partially understood by Ne-Yo's explanation of the album's title, he stated that he was: "trying to take it back to where you couldn't walk out of the house unless you looked your best." Citing his stylistic influences Nat King Cole, The Rat Pack, Ne-Ye commented: "they're suited and everything is right from top to bottom. Not saying it has to be a suit, 'cause clothes don't make the man -- it's the attitude and person. The music needs to personify that."

No one could credibly argue that Ne-Yo lacks style, the man could be the poster child for the slickly dressed young Black man, but his lyrical palette could use some refinement. When all is played and sung, Year of the Gentleman fits right in with the mostly over-produced genre slot that has come to define contemporary R&B a lot of style and not much substance.
続きを読む
2人のお客様がこれが役に立ったと考えています
役に立った
フィードバックを送信中...
フィードバックをお寄せいただきありがとうございます。
申し訳ありませんが、お客様の投票の記録に失敗しました。もう一度試してください。
違反を報告
レビュー を日本語に翻訳する