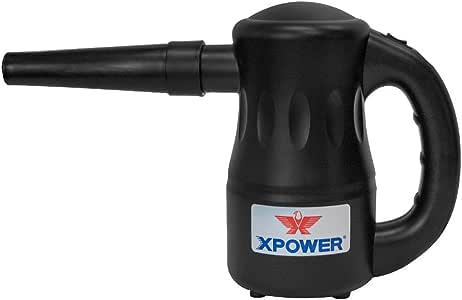 Christopher T.
5つ星のうち3.0 Moved less air than expected, high cost, well-built/sturdy and loud, assortment of attachments
2019年11月29日にカナダでレビュー済み
色: ブラックAmazonで購入
There were surprisingly few choices on amazon for electric duster and I bought this based on the good reviews and specs. I've been using the canned duster for more than 20+ yrs ever since they became available from a local wholesaler chain and they've been working great; however, I've been meaning to break the chain of 'refilling' for a while now and I hope this is it.

Build - it appeared to be well-built and the handle seemed sturdy as well. It didn't feel awkward holding it in my hand while operating (moving it around cleaning the keyboard etc) the duster. The power cord is about 3 meters (10 ft) in length and it's long enough for me to be able to move around freely.

Spec/feature - it came with quite a few attachments/nozzles; however, for the most part the only ones that are useful for me are the detail brush and/or air blade nozzle. I've tried a few electric dusters in the past but none of them lived up to the expectation (a few were close but not good enough) so I'm no stranger to electric dusters. While many aspects of a product matter, the crucial thing I really care about is the amount of air it can move in CMM (cubic meters/min) or CFM or cubic feet/min).

First thing first, this duster has 2 settings (low and high). At the low setting, it moved air at 20.65 m/s (as seen in the first picture) across a nozzle diameter of 23.9mm. At the high setting, it moved air at 23.88 m/s. If you consider the advertised RPM (35K vs 40K), then it was right within the claimed value. As a comparison, I also tested one of my air mattress pumps just to see how well/bad it performed; otherwise, these numbers would mean little or nothing for me if I don't have a baseline to compare it against.

NOTE: I decided to remove references to brand/make/model because I don't want the review to be flagged by Amazon review team thinking there was promotion content when in fact it was just part of natural speech in an unbiased review. I have absolutely no interests in promoting anything nor do I need to; however, I do believe it's necessary to make comparisons against something most people (me included) are familiar with in order to make the numbers meaningful for people and to bring value into the review.

To summarize its air-moving capability;

If you are wondering why the mattress pump only moved 43.79 CFM even though it achieved 20.08 m/s, well, it's because it had smaller diameter through which the air was moving; consequently, it moved far less air than the duster.

Noise - again, at the low setting, it registered 90.6 dB (as seen in the picture) with an ambient background of 47.4 dB (not the quietest). At the high setting, it registered 98.2 dB while a canister vacuum registered 86.6 dB for comparison (because we all know roughly how loud a vacuum is). In short, the duster was LOUD and that's to be expected for something that moved air at such speed.

Again, the following summarizes the noise level for those who are concerned about loudness; all measurements were taken at about 30cm / 1ft away from the detector.

Keep in mind that both the duster and the pump would naturally sound LOUDER because they are usually at/within an arm's length while being operated whereas the vacuum is usually on the floor perhaps 4-6 ft away. Also, none of the measurements were absolute; what I wanted to know simply was relative values so I could compare them with things I knew.

All things considered, it's not a bad electric duster; however, I expected it to be able to move much more air than it did given how much it cost and the fact that this is a AC-powered electric 'duster' that's exclusively designed for this (and not just a mattress pump pretending to be one), whose sole purpose is to move air for cleaning purposes. As such, I'm not entirely certain it has high enough value or is worthy of an investment for me at the moment.

*** It's much appreciated if you found the review helpful, please click on the Helpful button below ***

Abel Caulder
5つ星のうち5.0 you will get your moneys worth in a day if you're anything like me. I mean
2017年1月6日にアメリカ合衆国でレビュー済み
色: ブラックAmazonで購入
There is absolutely no reason to buy canned air.

I knew this was a powerful blower given the cfm, but I did underestimate it.

Spend $50 on it, you will get your moneys worth in a day if you're anything like me. I mean, I bought this to dust out the inside of my computer and it was so strong I was like "man, I don't want to stop using this thing, what else can I dust?" So, I went crazy, I dusted all of my electronics, my ceiling fans, the inside of my cars, my garage... I know right, even my garage.

Three hours later my roommate was like "Rone, what the heck are you doing with that blower man? You've been using it for like three hours?" to which I replied "word, three hours?" and continued to dust my entire house.

You will need a step-up converter to use.

Dane
5つ星のうち5.0 Goodbye disposable canned air, and 3 cheers for the environment!
2019年4月18日にカナダでレビュー済み
色: ブラックAmazonで購入
This little hand held power duster, is great. It gives you as much if not more pressure for dusting those electronics off as canned air. Only unlike with canned air there is no waste and it won't run out (short of you forgetting to pay the power bill). And it will also never spray moisture out regardless of what angle it is used at. When you want to really focus on an area, you don't have to concern yourself that you might run out early if not used efficiently either. And not having an arisol can to toss out after ward is a great boon for the environment. Possibly the best feature though is the one time cost. @$70CAD this little guy will pay for himself in not time flat. It's an investment.

Cons, none.
I have read in other reviews that it is loud. Yep that's 100% truth, but who expects a blower to be quiet? That's failed logic there. Don't use it next to a sleeping baby I guess lol I also read the attachments did not fit together. People need to put in more effort, the press fit together tightly so they do not blow off the end when in use. If you cannot fit them together, forget leg day... quit skipping gym day! :P

I highly recommend this for anyone that owns electronics that accumulate dust (I got it primarily for my self built PC) and can potentially have thermal related damage due to it's insulating qualities. 6 out of 5 stars!!!
続きを読む
8人のお客様がこれが役に立ったと考えています
役に立った
フィードバックを送信中...
フィードバックをお寄せいただきありがとうございます。
申し訳ありませんが、お客様の投票の記録に失敗しました。もう一度試してください。
違反を報告
レビュー を日本語に翻訳する
その他の国際レビューを読み込む

V
5つ星のうち4.0 Does the job
2019年2月28日にカナダでレビュー済み
色: ブラックAmazonで購入
I purchased this to clean my computer keyboard and the inside of my computer.

Notice the two holes at the side of the "Tapered Flow Nozzle" which when you have the 3 "Electronics Dusting Nozzle Category" (3 nozzles above) connected, the air blows out of here as well (so kind of annoying when I have stuff around getting blown away) and not just the straw nozzle.

I wish there was a bendy straw nozzle.

Yves Renaud
5つ星のうち1.0 Low quality, performance ok
2018年7月19日にカナダでレビュー済み
色: ブラックAmazonで購入
As mentionned by other, some attachments didn't fit properly and therefore are useless. The long tube doesn't fit anywhere and the carrying bag strap were unbreaded out of the box. The whole thing is really low chinese quality, I wonder how long it's going to last. In terms of performance, it does the job of a regular air can, without generating the polution, so that's a benefit.

Graham
5つ星のうち5.0 Holy smokes this thing blows!
2018年8月17日にカナダでレビュー済み
色: ブラックAmazonで購入
This thing blew my expectations away. One shot at the computer and it was like a dust storm in my office. Good thing I had the vacuum ready to go!

I'll never need another can of air again, this thing is just crazy powerful. It is about as loud as a vacuum, so be prepared for that.

The Data-vac one was at least $50 more expensive, yet claimed to be made in the U.S.

As a Canadian Citizen I couldn't give two flying frogs about the fact that Data-vac was made in the U.S. What matter to me was the Price vs Performance ratio, and needless to say this X-Power just Blew me away, literally.

It's Noisy I think, not sure, because never owned one before this, it's definitely noisier than a Spray Can, but also definitely more powerful and Eco-friendly (Greta Thunberg certified)

I've used the First Level of Power and that's all it took to remove even surface dust that was kind of glued to the plastic due to Static. I passed my finger on the Fans inside my gaming computer (Emphasize on gaming) and nothing was left.
A real Genocide to Dust.

One thing though, don't make the same mistake I did, try to use a Vacuum at the same time, unless you love snorting dust (to each their own).

Very Powerful and made out of robust plastic. I know good quality plastic when I see one and this isn't the kind of one that you'll find on the Cheaper Chinese Models sold for 1/3 the price. It feels solid and not too big and very comfortable to use.

The different plugins are easy to use and I've no idea why other reviewers said they don't fit their Blower, my plugins all worked perfectly, they do fit snug though (Duh) and I guess that makes sense since you don't want to see your Tubes fly everywhere like shot from a canon.

All in All I do recommend this product :).

Radish
5つ星のうち5.0 goodbye cans of air
2018年9月18日にカナダでレビュー済み
色: ブラックAmazonで購入
man i don't know why i didn't find this sooner. I have needed a thing like this to clean dust out of my computer for ages and for this it is excellent. it comes with a variety of attachments (most of which i don't use or need) however I find that i really only use one because it does the job i need it for adequately.

the air flow of this device is excellent almost on par with the pressure of an air compressor and it very easily takes off caked on dust and debris from the inside of electronics.

mdkxp
5つ星のうち5.0 Glad I got this!
2019年6月19日にカナダでレビュー済み
色: ブラックAmazonで購入
I was really hesitant to drop $80 or so on this thing, but I am really glad I did! Whenever I need a can of compressed air, I would have to go to the store and get it, and it doesn't last very long, freezes up, etc. And they're surprisingly not cheap. This thing is also not cheap, but considering the number of cans of compressed air it will inevitably replace, it more than pays for itself in due time. And the air pressure it puts out is impressive. I wasn't sure if it'd be good, but it sure is! I watched a video on YouTube before buying, and it convinced me that it's probably good. It's better than I was expecting. Cleaned my PC no problem, and much faster than a can of compressed air due to the volume of air it pushes and the force it pushes with. I'm pretty impressed. It has 2 settings, and a bunch of nozzles. I use the most-concentrated tip with the extension tube, and it's perfect. Here's hoping it lasts, and I never need to replace it.
続きを読む
役に立った
フィードバックを送信中...
フィードバックをお寄せいただきありがとうございます。
申し訳ありませんが、お客様の投票の記録に失敗しました。もう一度試してください。
違反を報告
レビュー を日本語に翻訳する