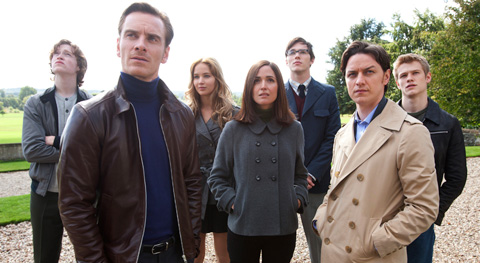 rbmusicman/and/movie-fan'
5つ星のうち5.0 HOW IT ALL BEGAN
2021年2月2日に英国でレビュー済み
Amazonで購入
A 4K GEM, with its awesome array of visual excellence/special-effects that are hugely enhanced by the 4k upgrade.
The story starts in 1944 when young Jew Erik Lehnherr (young played by Bill Milner later on by Michael Fassbender) is seen by Auschwitz Nazi Officer Klaus Schmidt later Sebastian Shaw played by Kevin Bacon bend fencing when separated at the camp from his mother.
The Officer himself a mutant challenges Erik to move a coin on his desk using the powers he'd witnessed by holding a gun directed at Erik's mother who had been brought to the Nazi's office, when Erik fails Klaus kills Erik's mum.
Erik will spend the next 18 years planning revenge.
Meanwhile, we are introduced to a young Charles Xavier (young played by Laurence Belcher older by James McAvoy) who meets young shape-shifter Raven (young Morgan Lily older Jennifer Lawrence) Charles adopts young Raven as his foster-sister because she also has powers as has he.
Some years on, Charles and Erik will become close friends after Erik is persuaded to give-up an underwater chase of 'now' Shaw in a submarine which in effect saves Erik's life.
Shaw is stirring up trouble threatening nuclear war between Russia and the U.S, though mutants are not accepted by the 'human's' Charles and Erik supported by young mutant recruits will try to avert disaster.
However, when the threat is quelled, Erik and Charles want different things, Charles wants to try and build an understanding with the so-called humans, whilst Erik wants conflict with them, the two with those among the young mutants that will follow go their separate ways.
A superb watch, telling of how it all began, even better than I remember it to be when viewed a while ago.
Worth another look especially on the 4K format
続きを読む
1人のお客様がこれが役に立ったと考えています
違反を報告
レビュー を日本語に翻訳する

Chris Gelderd
5つ星のうち3.0 "Peace Was Never An Option"
2014年8月7日に英国でレビュー済み
Amazonで購入
This was a much needed revamp in the X-Men series after the luke-warm but successful reception of ‘X-Men: The Last Stand’ and the disappointing ‘X-Men Origins: Wolverine’. It dispensed with the inclusion of dozens of mutants from the comics to please all die-hard fans and also removed the CGI heavy action and frantic story in way for a more well-paced, thought out and emotional story that plays out a REAL origin story of the two figureheads of the series: Professor X and Magneto.

With such a strong cast, James McAvoy and Michael Fassbender embody the roles made famous by Patrick Stewart and Ian McKellen in a way you really can understand they are the way they are when we meet them nearly 40 years later. Both actors show their dexterity in acting, from tapping into strong emotion and heartache but also warm friendship and humour as their relationship progresses and changes over the course of the film. A clever script and thought-provoking story make it all more relevant and gives them both something to really chew over in making their characters more than just cardboard copies of who they were, both actors create who they ARE in a wonderfully engaging way. And with great support from the wonderfully sly Kevin Bacon, the gorgeous January Jones and also ever likeable Rose Byrne, Jennifer Lawrence and Nicholas Holt fill the other important roles with great pathos and energy. Even our young mutant heroes in the likes of Zoe Kravitz, Lucas Till, Edi Gathegi and Caleb Laundry Jones are easy enough to like, even though are just token additions to add the action stakes. All characters seen are used to move the story forward, not just expendable and throw-away characters to please fans.

Special mention goes to a great and inspired cameo by Hugh Jackman as Wolverine, something that is referred to once again in ‘X-Men: Days Of Future Past’.

The film can feel a little long, but only because so much of it is spent on character development and narrative progression which is crucial to what director Matthew Vaughn wants from his film, in which that is to flesh out characters and gives us the reasons why they became the characters we met back in the original ‘X-Men’ film.

It’s a very clever and well thought out film, referred to as a blockbuster with brains, which is something why many action-heavy, CGI popcorn blockbuster audiences were wary of this film; intelligence in a blockbuster is a rare thing, but it gives fans of the series a reason to have faith in the future of the films, especially with the positive reaction for ‘Days Of Future Past’ as it lays foundations to build and develop on from a world more realistic and relevant than seen before with a cast that are strong, dedicated and understanding of the roles they are in.

The CGI action towards the end is a little touch-and-go in places, but still well staged with lots of time for the goodies and baddies to shine with their powers which makes watching the X-Men so much fun. It’s a strong film with an obvious underlying message of faith, family and friendship played out, and it’s all the better for it as it starts to strong, you can’t wait to see where it continues and thankfully we don’t have long to find out.
続きを読む
4人のお客様がこれが役に立ったと考えています
違反を報告
レビュー を日本語に翻訳する

Gav33
5つ星のうち5.0 Xmen Begins Again
2012年10月16日に英国でレビュー済み
Amazonで購入
I enjoyed the first two Xmen movies but was less then impressed with the third installment. Xmen Origins Wolverine was good if not a little predictable plus I felt it went over much old ground that had been covered in X2 so I was a little cautious with this one when it came out.
I Didnt need to be this movie is incredible. I heard somewhere that the guy who directed this was offered Xmen 3 but turned it down as he didnt think he was ready for such a big movie. There are two ways of looking at this. Firstly had he of done X3 it could have been amazing and the franchise would have carried on, or secondly this movie would not have been made and that would have been a real pitty.
The movie concetrates on the relationship between a young Charles Xavier played by James Mcavoy and a young Erik Lehnsherr played be Michael Fassbender. In the original Xmen movies we gather the two men were once friends but this movie shows the level of the friendship from there first meeting to the ultimate opposite outlooks that tear there friendship apart. Macavoy is brilliant as a young Professor X and carries himself with a little swagger as he attempts to chat up college girls at the beginnig of the movie to the paitient individual we met in the fist film when he is helping to train the original Xmen. But it is Fassbender that steals it for me from his small and fleeting one liners to the intensity as he uses his powers to pull a nuclear submarine from the ocean beneath him he is truly captivating when on screen and the chemistry between he and Macavoy is something to be seen. The rest of the mutants just sort of follow along with the exception of the key bad guy Sabastian Shaw played by Kevin Bacon who brings Magneto and Professor X together.
When the two friends finally go there seperate ways the pain in Magneto as he realises his friend will not join him is evident.
In closing this is an amazing superhero hero movie on par with the original two Xmen movies if not better. The cast is good the effects brilliant and a very good story. If there were a comic inspired movie out there to rival Marvel Avenger's this could be it. This is a well made movie and has a great deal of replay value.
続きを読む
3人のお客様がこれが役に立ったと考えています
違反を報告
レビュー を日本語に翻訳する

Sam
5つ星のうち4.0 A blast from start to finish
2012年6月19日に英国でレビュー済み
Amazonで購入
Bryan Singer gave the famous x men comic and cartoons life with his first two installments in the franchise and he did it very well, and with the third installment Brett Ratner pumped up the action and delivered another thrilling film. Then we got the origins of wolverine and the franchise started to decline somewhat. Now, Matthew Vaughn (Kick Ass) directs and he, like Singer, does an awesome job. Taking the story right back to the origins of the forming of the x men, Jane Goldman's script makes full use of the myriad mutants and delivers a story that is both entertaining, action packed and sets up the inevitable future installments.
The cast, led by James Mcavoy who plays Xavier brilliantly and Michael Fassbender who seems to have been born to play the younger Magneto, have been put together excellently. The supporting cast, including Rose Byrne, Kevin Bacon, Jennifer Lawrence and a really funny cameo in a bar, are just as talented as the main cast. Vaughn's vision of the x men universe is very much consistent with Singer's, and despite the obvious time shift there is clear parrelilsms that make this film all the more entertaining and consistent.
The story follows Xavier and Erik as they recruite mutants and form the school we all know, they come together to stop a ruthless, determined tyrant who wants to initiate World War 3. And so an enthralling two hours is set up during which you will not be bored at any one point. The origin stories are very interesting and the action orientated set pieces are imaginitive and thrilling. The CGI has come a long way since the first four films and is flawless and never overused to the point that its a hindrance.
Overall, Vaughn has rebooted the weakening x men franchise and delivered an absolute blast of a film. Fans of x men will not be dissapointed and newcomers will be drawn into the x men world. Don't hesitate on this, get it, watch it.
The extra features are pretty poor fare, a few deleted scenes that aren't really worth bothering with. There is a digital copy to put on your ipod or computer which is cool if you want to watch it on the train or a long car journey.
続きを読む
違反を報告
レビュー を日本語に翻訳する

ShinsFortress
5つ星のうち3.0 Not bad...
2014年6月26日に英国でレビュー済み
Amazonで購入
I am a big X-Men fan, but am somewhat unusual in terms of appreciation of the films. While X1 & X2 are still my favourites, I didn't think X3 was that bad! Worst one was O:W.

This film is well cast, well written, well shot and for the most part well acted. Kevin Bacon does a reasonable (let's not get wild with "acting greatness"). The problem is, it doesn't really tell me anything new and suffers from the default problems most prequels have. "History" cannot be changed. After this, the amount of prequels I rate at 4 or 5 stars I can still count on one hand.

I find storytelling that looks back too much to be lazy and re-uses material instead of effort being put into something new. History looks back, stories go forwards! I would prefer film series (and X-Men is not an exception) to move forwards. For those simply interested in the background of the characters or who just need a boatload of more material, graphic novels, source books etc are a much less resource intensive way of doing that.