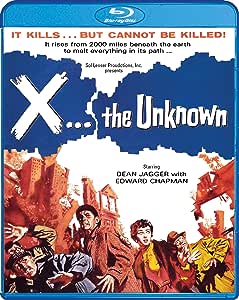 Fred
5つ星のうち5.0 X the Unknown
2019年3月30日 - (Amazon.com)
Amazonで購入
This is one of the best sci-fi/horror movies to come out of Britain in the 50s. It is expensive but in my opinion worth it.
続きを読む
2人のお客様がこれが役に立ったと考えています
レビュー を日本語に翻訳する

Mark H. Townsend
5つ星のうち4.0 The Mud from Hell
2010年5月3日 - (Amazon.com)
Amazonで購入
I recall watching this movie on TV as a kid. I was particularly chilled by one seen in which a doctor, being attacked by this ooze from hell, is killed by its radiological effects, and the flesh is simply melted of his skull, leaving behind only the white bone beneath. By today's standard a cheap effect, but not too shabby in the 1960s.
The film is B&W and stark, and atmospheric. The monster here is a mud-like creature from deep inside the earth, which seeks out radioactive matter to sustain itself. Reminiscent of Steve McQueen's "The Blob," this creature is rather smaller, and while some people think this film copied McQueen's film, this was actually an earlier work, and, in some ways is more effective.

Larry K.
5つ星のうち5.0 excellent pure sci-fi movie
2009年11月12日 - (Amazon.com)
Amazonで購入
X the Unknown is one of those movies that will hold your attention from beginning to the end. The use of the geiger counter as the noise for the radioactive mud creature is QUITE effective. Dean Jagger was perfect in this movie. Leo McKern, as always, puts in an excellent performance.

I know some of you will say 50s movie, no-way, or that it is in black & white. But please don't let that deter you from buying this. The movie is a like a book that you must read from the beginning to the end. Please don't overlook this gem from England!

Brad Shaw
5つ星のうち5.0 Another Masterpiece
2013年10月13日 - (Amazon.com)
Amazonで購入
As you can tell, eight stars out of five for the British Science Fiction. Incredible special effects (not for the time, but in general), great explanation, touching (The Dr. Talking to the sick boy) military realism, and a special first (or very first) appearance with Anthony Newley for Dean Martin Rat Back Era fame who was in Doctor Doolittle. Watch and Enjoy!
続きを読む
1人のお客様がこれが役に立ったと考えています
レビュー を日本語に翻訳する