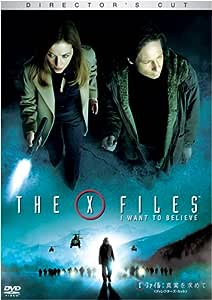 NDalby
5つ星のうち4.0 Taking a different direction again but not an overly bad film
2016年9月2日に英国でレビュー済み
Amazonで購入
The X-Files second outing comes 6 years after the ending of the series and unlike the generated hype of the first film did not fare overly well at the box office, possibly due to the 'Hollywood Heavyweight' release of The Dark Knight. Mulder and Scully have now been out of the FBI for several years, Scully returning to medicine and Mulder still searching for the truth from his home office retreat which bears similarities to his former FBI office (poster and all). After being invited back to the FBI to help with the disappearance of a female FBI agent, they are paired with a psychic former priest and child molester who claims to be having visions which can help them. Their former boss Skinner makes a welcome appearance in this second outing which focuses more towards paranormal over conspiracy.

Blu-Ray contains both the theatre and directors cut and a whole smorgasbord of extras such as bloopers, deleted scenes, behind the scenes featurette's and an isolated score track for the Mark Snow music lovers. Video and Audio presentation is as to be expected for a recent film with a decent budget, very good.

M. Scott
5つ星のうち5.0 Excellent Blu-Ray, Good movie....
2009年4月28日に英国でレビュー済み
Amazonで購入
After such a long wait imposed by legal wrangles that bottomed out any prior plans to release a second X-Files movie, we now have Mulder and Scully back on the big screen (ok in this case it's in your home so the screen size may vary) and it is well overdue.

First off, the quality of the Blu-ray image and the crispness of both picture ond sound are truly amazing. The texture of the snow, the city lights, the flowing hair is all just ultra detailed and a true demonstration of the power of the newest technology, and with the prices here on Amazon, I expect more people to begin upgrading to Blu-Ray discs sooner rather than later. The size of the BR discs is apparent from the back cover...Not only does it have a copy of the Theatrical movie, but a copy of the Directors cut, an 82min documentary as well as all the other outtakes, stills and such you would expect in any DVD/BR disc nowadays. You can even choose to watch the whole movie with only the soundtrack/score playing (i.e. no vocals effects etc...just the eerie music....a nice touch).

The movie itself is basically an extended episode of the X-Files as we follow Mulder and Scully through a series of personal and public revelations as they attempt to find a missing FBI agent. The intertwined love story between Mulder and Scully, both of whom are out of the FBI, is interesting and the underlying plot and paranormal elements to this movie are good, but it fails to really make the most of the longer format for me. A very good double episode but not really capturing the action/urgency of the first movie. It needed a little more blast for the cash in my humble opinion - more action and somethign a bit extra than what we got in the TV series...

However, one thing I really wanted to highlight was the extra disc containing a 'digital copy' function. This basically allows you to put the DVD (could be a CD i've not tested it out yet) into your computer and create a copy of the movie for use on your iPhone or other portable media device. About time this was offered too. Why can I create an MP3 version of any CD's I buy for use on my portable device but I am forced to "re-buy" a movie I have bought on DVD or BR just for use on a portable format? There is also a link from your BR-disc to a web content via a internet link (ideal for you PS3 afficionados out there).

A good movie that could have been more, a possible 4-star, but an extra star for the quality and the digital copy function which I think really set this up as such a great buy....certainly at Amazons prices!

E. A. Redfearn
5つ星のうち4.0 A Reminder of What The X-Files Used To Be About
2008年12月12日に英国でレビュー済み
Amazonで購入
Being an x-file fan since the very beginning, (I have all 9 seasons on DVD, and they are still available at a great price)I was looking forward to seeing the new version especially since it is on Blu-Ray format.

It is a genuine reminder of what the x-files meant to millions of fans around the world. A priest with a dubious background(Billy Connolly) is helping the FBI to find a missing FBI agent. He ends up frustrating the other agents (and the audience many who found the story a bit difficult to follow) during his many failed attempts, leaving agents Scully more sceptical than ever, and a bearded Mulder who hasnt lost his ability to "see through" a person or situation in order the find answers, after all isn't "The Truth Out There"?

It does end in a rather bizarre scenario which I won't reveal here of course.

It is good to see Mulder and Scully back together again, a little older, but are they any the wiser? It is also good to see that the friendship which had grown between them over the years hasn't diminished.

The movie however, is rather slow and empty during the first part, although it does end rather well. I would have thought that there would have been a lot more references to the earlier x-file cases, indeed Assistant Director Walter Skinner does not appear until the final 20 minutes or so. Still, it's a worthwhile effort, although it won't go down as one of their better cases. There have been far better 2 parters in the past (Disclosure; Two Fathers, One Son; Dreamland etc)

The Blu-Ray presentation is quite well done, although some critics have pointed out that the picture quality is questionable in some scenes. There are numerous extras which will please the fans, and the audio soundtrack is very good.

A good buy though if you can put up with the first part of the movie which lacks suspense.

Alistair
5つ星のうち2.0 Poor
2019年6月30日に英国でレビュー済み
Amazonで購入
X-Files series faded towards the end, the two films that accompanied are bitterly disappointing. Impossible to ignore from a completion point of view, but boy its a chore rather than a joy to sit through.
続きを読む
違反を報告
レビュー を日本語に翻訳する