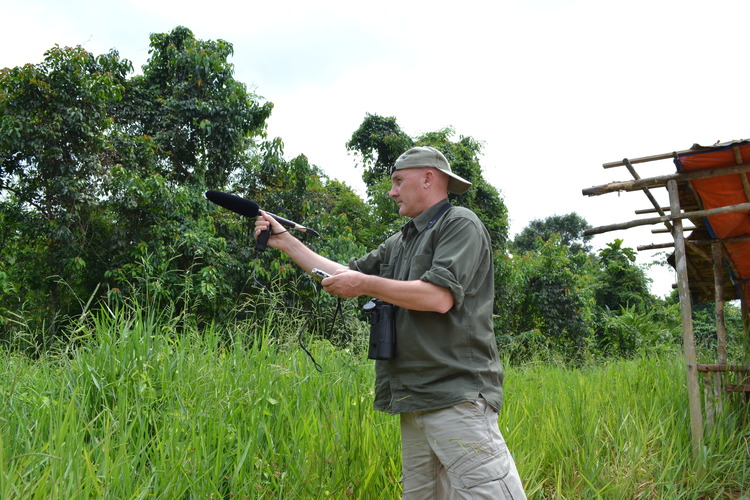 Naturalist and woodpecker expert Gorman examines 239 species in this splendid survey... The guide begins with a brief introduction to all things "woodpecker," including taxonomy, distribution, anatomy, flight, food and foraging. More detailed species accounts follow. The book's design and organization are superb; it's profusely illustrated but not cluttered. Smaller plates depict male and female color morphs, as well as adult and juvenile plumage. Wonderfully sharp images of nestlings in tree cavities and birds with insect prey are noteworthy... The fine photographic array of what are surely some of the planet's most exquisite creatures will engage both advanced and casual birders.-- (03/16/2015)

Our post-modern world of relatively cheap international air travel and affordable telephoto lenses has made photographic guides to various groups of birds possible. However, travel and photography don't guarantee a quality book. Intelligent book design, subject expertise, thorough research, and concise writing are required, qualities that are immediately obvious in the excellent Woodpeckers of the World: A Photographic Guide, making it a model to which a new generation of bird photo-guide compilers can aspire... The photographs are crisp, the colours are brilliant and true, the editing is top notch, and the prose is succinct. The only extravagance is an attractive one: each genus is introduced by a full page photograph of a representative species. The author urges anyone with new information about woodpeckers to contact him at the publishers, so that future editions of this outstanding work can be updated. Highly recommended.-- (06/01/2014)

Woodpeckers are truly among the most captivating groups of birds. A comprehensive new photographic guide, Woodpeckers of the World, by Gerard Gorman, capitalizes on this interest by treating each of the world's 239 woodpecker species individually, with detailed information provided about each, covering different aspects of their life history. Within each species account, usually two or three photos are shown, most of which are are absolutely stunning. Alongside these are brief sections exploring field marks, vocalizations, drumming, status, habitat, range, taxonomy, similar species, and foraging. Within these pages, we learn just how astoundingly diverse the family Picidae really is.... Discovering all of this variety is the real joy of flipping through the pages of this book.... Introductory sections are all narrative, and make for great reading.... But the pictures are the real draw of this book, and what really make it worth owning. The photographs are beautiful, and wonderfully illustrate the incredible diversity of woodpeckers... Across the over 750 photos there's plenty of variety to salivate over. Considering the number of woodpecker species that are still difficult to access, or are simply not well understood, it's easy to see that this book was a huge and impressive undertaking. Most birders, no matter how ambitious, will only ever see a fraction of these species in real life; those who share my fascination with this family will want to check out Woodpeckers of the World, and start fantasizing about what they're missing.-- (09/04/2014)

Gerard Gorman is an ornithology author specializing in woodpeckers. He founded Probirder birding and touring company more than 20 years ago, and has traveled to five continents in search of woodpeckers, especially his favorites, the picids. His books include the acclaimed handbook, Woodpeckers of Europe, and The Black Woodpecker. He also maintains blogs on all world woodpeckers.

Katrien Van Lerberghe
5つ星のうち5.0 The most complete book about woodpeckers I've seen yet .
2019年10月25日にアメリカ合衆国でレビュー済み
Amazonで購入
I like the nice , clear photos of all those different kinds of woodpecker . The book is also user- friendly . When you open the book you get the contents , then the general Taxonomy , Distribution , Anatomy , habitat , behavior , breeding etc of woodpeckers . Then comes the species accounts with the page where you can find that particular species . You get a clear photo of the woodpecker , if possible a male and a female , with a small map of his / her range , and a very good description of what they look like and what they sound like , status , habitat , range , taxonomy , similar species and food requirements . I bought the book for the pictures ,for I love woodpeckers , the rest is a bonus for me . But for a biology student or anyone interested in birds , this book must be a slice of heaven .
続きを読む
役に立った
フィードバックを送信中...
フィードバックをお寄せいただきありがとうございます。
申し訳ありませんが、お客様の投票の記録に失敗しました。もう一度試してください。
違反を報告
レビュー を日本語に翻訳する

hilljack13
5つ星のうち5.0 Great book
2017年3月26日にアメリカ合衆国でレビュー済み
Amazonで購入
Wonderful full color photos of woodpeckers from all over the world. I enjoyed learning about all the many species that are out there and how similar some of these species are as well as the vast diversity of them. I would recommend this book to any bird lover, especially for those that like woodpeckers.
続きを読む
1人のお客様がこれが役に立ったと考えています
役に立った
フィードバックを送信中...
フィードバックをお寄せいただきありがとうございます。
申し訳ありませんが、お客様の投票の記録に失敗しました。もう一度試してください。
違反を報告
レビュー を日本語に翻訳する

Jack Holloway
5つ星のうち4.0 Highly attractive photos show nearly all species
2014年7月7日にアメリカ合衆国でレビュー済み
Amazonで購入
THE BASICS
hardcover; covers all 239 species of woodpeckers in the world; 722 good color photographs show all but five of the species; this is a photographic and natural history guide but not purely an identification guide; text on each bird addresses description, status, habitat, range, food & foraging, vocalizations, drumming, and taxonomy; a large range map for each bird shows the general distribution across the region

THE REVIEW
This is an attractive book where the highlight of its contents is the collection of 722 color photographs that make up this thick book. This is the first photographic book to address all 239 species of woodpeckers in the world. However, it should be pointed out that 5 species are not shown (Rusty-necked Piculet, Yellow-faced Flameback, and the Atlantic, Ivory-billed, and Imperial Woodpeckers).

The book is arranged into "chapters" with one chapter focusing on a Genus. It was a nice artistic touch to start each chapter with a full page, impressive photo of one member of that Genus. There are many spectacular photographs throughout the chapters, such as the Okinawa and Crimson-crested Woodpeckers. Except for five species with only one photo, all the others are shown with 2-5 photographs which depict both the male and female when differences occur. Only a few of the birds have photos that show the various subspecies. Hopefully, this book will drive further photography of some of the lesser known birds. Although most of the photos are good, a few species (e.g., Balem, Red-collared, and Southern Sooty Woodpeckers) need improved photographs.

A medium-sized to large range map accompanies each bird. For those species that migrate, a 3-color system is used to denote summer, winter, and resident. The maps do a good job of showing the general ranges of the bird in the region. However, the maps show only the outlines of the continents and not of any of the countries. Consequently, the range of some birds such as the Rusty-necked Piculet or the Strickland's Woodpecker is a little vague if you are trying to find out exactly where this bird can be found. On the flip side for islands such as The Philippines, Indonesia, or Sri Lanka, many of the maps do zoom on the specific area of where the bird is located.

The Identification section might be more aptly named "Description". This material describes the bird in good detail; however, this description often does not identify or separate the bird from another woodpecker since multiple birds can often share some of the same elements of the description. To help distinguish one species from another, the section on Similar Species is used for some of the birds and contains brief, additional notes on the identifying characteristics.

The author has done a good job on the Vocalizations section, sometimes offering a full paragraph to describe the variety of calls the species might make. The descriptions use both effective adjectives in tandem with written patterns such as "fast, loud, staccato kuk-ki-ki-ki-ki-ke-ku-kuk" or "chattering yeh-yeh-yeh and weaker wiii notes".

I appreciate the additional section on Taxonomy and Variation given for many of the birds. This section provides a quick review on the several subspecies that may be involved, comments on being part of a superspecies, and, briefly describes some of the plumage variations.

This book is a photographic guide and can be used to help learn and maybe even identify most of the woodpeckers. However, for anyone wondering how to use this book, I would not call it an identification guide. The photos are good but do not show all the plumage variations; and, the text is geared towards giving an overall natural history account for the bird aided with detailed descriptions. Regardless, this is great book to have since it is the only photographic guide to include all woodpecker species on the planet and is replete with great photography. -- (written by Jack at Avian Review with sample pages, July 2014)
続きを読む
8人のお客様がこれが役に立ったと考えています
役に立った
フィードバックを送信中...
フィードバックをお寄せいただきありがとうございます。
申し訳ありませんが、お客様の投票の記録に失敗しました。もう一度試してください。
違反を報告
レビュー を日本語に翻訳する