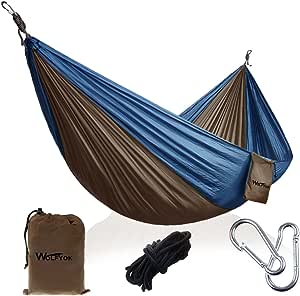 C2L
5つ星のうち4.0 - 1 x Hammock 2 x Carabiners 2 x Rope pieces 1 x Carry bag This Hammock is made with durable materials like Nylon which is used to make Parachutes# There is ...
2017年6月20日に英国でレビュー済み
Amazonで購入
Amazon yet again have delivered, I received these on the same day as I ordered, delivery was by prime and as always very efficient.

To the product:-
Reason for purchase - Purchased this as I use a PC all day and was getting significant hand and wrist pain.

The product comes in a Jiffy bag, It comes in a hassle free packaging so there's no need for scissors.

There is no rocket science involved in this innovative, It is pretty simple design, used durable materials, easy to fold and keep in the bag which comes with hammock (attached to hammock). Easy to assemble, easy to carry (it fit in a bag), easy to disassemble, lightweight.

All in all a great product.

*If you have any questions, then click my profile and drop me a message and I will be happy to help you. To understand my star rating please see my profile. *

Mr Bernie Coles
5つ星のうち5.0 Brilliant.
2018年4月21日に英国でレビュー済み
Amazonで購入
I’ve been using these almost weekly for about 18 months now and they make life so much easier when picking hammock sites and setting up.I was a little concerned at first as I’ve heard horror stories of stitched slings coming apart,but I needn’t have worried as they are showing no signs of wear.With myself and the dogs in my hammock we’re almost 170kg,so they’ve had a good test.Highly recommended.
続きを読む
役に立った
フィードバックを送信中...
フィードバックをお寄せいただきありがとうございます。
申し訳ありませんが、お客様の投票の記録に失敗しました。もう一度試してください。
違反を報告
レビュー を日本語に翻訳する

Gobracht
5つ星のうち5.0 A good buy, especially if used with a 2nd set of biners
2018年2月19日に英国でレビュー済み
Amazonで購入
Lived with these for a year now and I've found that I prefer them to woopie slings or knotted straps for ease and speed of set up. Best paired with a second set of carabiner to make clipping round a tree ultra speedy. As a 110kg guy, I feel totally secure with the set up.
続きを読む
役に立った
フィードバックを送信中...
フィードバックをお寄せいただきありがとうございます。
申し訳ありませんが、お客様の投票の記録に失敗しました。もう一度試してください。
違反を報告
レビュー を日本語に翻訳する

R M Walters
5つ星のうち5.0 As per description
2018年6月2日に英国でレビュー済み
Amazonで購入
Would recommend adding them to your kit for setting up your hammock. The loop adjustments made it very easy to adjust the hammock height. Used them for the first time last weekend wild camping in a wood
続きを読む
役に立った
フィードバックを送信中...
フィードバックをお寄せいただきありがとうございます。
申し訳ありませんが、お客様の投票の記録に失敗しました。もう一度試してください。
違反を報告
レビュー を日本語に翻訳する

The hammock also comes with it's own nylon cord that is apparently good for 1100lb, but I won't have guessed since it's thinner than rope. The material itself is lightweight and fast drying and apparently good for 500lb, which is amazing considering it's the thickness of a thin sports/ rain coat

I do wish the included nylon cords were even longer though, since it's not easy to find trees close together. I do need to brush up on my knot tying skills though, my knots always make me nervous but so far no accidents.

In terms of comfiness, I enjoy sitting sideways and also lying down. When lying down it does feel a bit tight at the shoulders, but kind of pleasant like being wrapped in a soft cocoon. I've fallen asleep in it and alway woke up well rested.
続きを読む
役に立った
フィードバックを送信中...
フィードバックをお寄せいただきありがとうございます。
申し訳ありませんが、お客様の投票の記録に失敗しました。もう一度試してください。
違反を報告
レビュー を日本語に翻訳する

Will D.
5つ星のうち5.0 Excellent for the price. You can now enjoy hanging between trees without having to empty your wallet.
2017年10月9日にカナダでレビュー済み
Amazonで購入
I got this hammock as a cheap secondary hammock in case somebody wanted to come camping with me, but didn't want to lug around a tent for themselves. I've set it up twice now, and it was very easy to set up both times. One thing that I would recommend is untying, and then retying the knots on either end that attach the hammock to the carabiners. The knots that came tied at both ends of my hammock did not appear trustworthy. ENO has a helpful video showing how to tie the knots on the ends of your hammock called "How To: Re-Tie Your Hammock Knots". The first time I set it up, I tried to do so using only what was provided, the two solid carabiners, two short lengths of nylon rope, and the hammock itself. Note that all of those things fit inside the bag snugly. I was fortunate enough to have two trees that were close enough together to attach it using only what was provided. One of my siblings and I sat it the hammock, and it was able to hold both of our weights without any issue. It was comfortable to lay down in, and while it was tempting to take a nap, I decided I'd better not since I still wanted to test it using my other gear. I replaced the heavy (but strong) carabiners it came with with some very light strong carabiners, and I replaced the rope with some tree straps. After I had done that, I was able to hang up the hammock between two decently far trees in less than a minute.

Considering the low price of this hammock, and the fact that does exactly what it needs to do, I'd say this is a great deal. My only issue with it is that the seam where the colours change can press into your head if you're lying across the hammock diagonally (so that you can get a flat lay). This is an issue with pretty much every small hammock though, so I can't really fault this one for being like that. Just something to keep in mind.
続きを読む