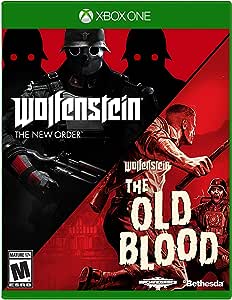 Wolfenstein: The Two Pack For Xbox One (輸入版:北米)

Jeff
5つ星のうち3.0 Second disc was blank.
2018年2月21日 - (Amazon.com)
Amazonで購入
I played the first game off and on for a couple months before I was ready to play the second game. I put in the second disc and there wasn't anything on it. Nothing was printed there. It was just a blank disc.

It was too late for me to return it according to Amazon policy.

This is just a warning to check the second disc before it's too late to return it.

I would recommend this for a gaming adult, it may be too gory for anyone younger than 16.
続きを読む
5人のお客様がこれが役に立ったと考えています
レビュー を日本語に翻訳する

Sterling M.
5つ星のうち3.0 Killing Nazis with style
2020年1月10日 - (Amazon.com)
Amazonで購入
First of all, this was a good price for including the game + DLC. Most of all, because the expansion delivers about 6-10 hours of story and new gameplay mechanics.

That being said, Wolfenstein the new Order it's a "take care of the enemies and move on to the next area" type of game. Boring B
class movie storytelling, lack of cohesion on the narrative-gameplay, inexistent character development and a jarring tone that hardly tries to figure out it's place by putting you in the skin of a soldier in the middle of WWII, who experiences the mental-physical consequences of war...

Then you get attacked by a giant robo-dog.

Despite all of that, it manages to bring a fun and solid FPS experience, full of –good implemented– game mechanics such as (pretty much satisfying) stealth and turning-left to right-behind a corner.

With a wide arsenal compound of pistols, grenades, assault rifles, submachine guns, shotguns, lasers, grenade-launchers and machine guns. The game gives you the opportunity to eliminate all the Nazis that crosses in your path, in very different ways.

Technically speaking, the details, graphics and game design are stunning. Going through prisons, battlefields, high-tech Nazi facilities and the moon itself. There's even a complete area that makes tribute to the mithycal 'Wolfenstein' from the 90's.

Wolfenstein the new Order it's all you've been expecting from a Id Software games: Gore, Blood, limbs tearing apart and a ABSOLUTE AWESOME soundtrack to bang every time your going on a rampage killing-spree
続きを読む

Mateo
5つ星のうち4.0 I love this game!
2019年8月24日 - (Amazon.com)
Amazonで購入
I do like shooter's game and when I saw this and at that price, I ordered it immediately. Killing all Nazzis.. I had fun playing this game. I am now finished the first game which is the "New Order" and now playing the "Old blood". The only thing with this is game is a bit short for me, but hey I got hooked up with this game and I will probably get the Wolfeinstein II, I will have to wait until price comes down for a deal. Overall this is a great game for under $20 and having two games in one pack is a deal. Glad I bought this !!
Hope this helps on your purchasing decisions.
続きを読む
レビュー を日本語に翻訳する
Amazon.comのカスタマーレビューを見る(73) 5つ星のうち4.4
Amazonプライム会員ならお急ぎ便、日時指定便が使い放題
さらに、映画もTV番組も見放題。200万曲が聴き放題 。クラウドに好きなだけ写真も保存可能。
> プライムを無料で試す