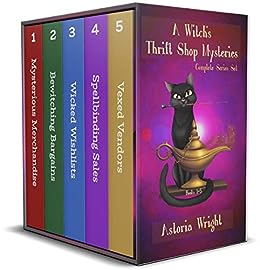 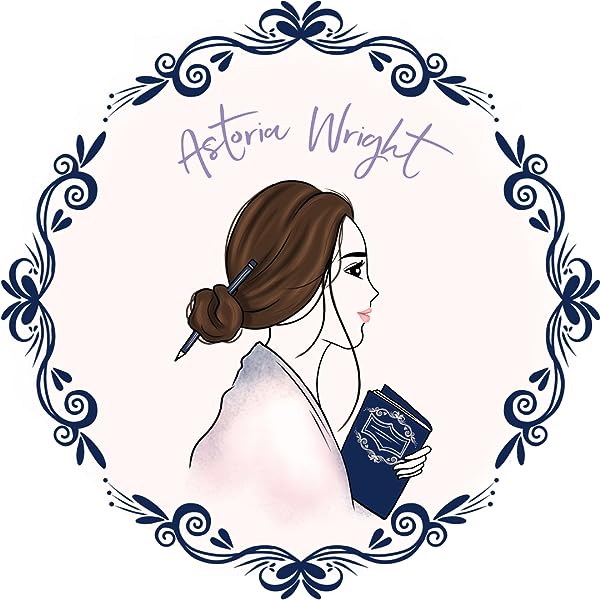 英語版 Astoria Wright (著) 形式: Kindle版
すべての形式と版を表示
Sorry, there was a problem loading this page. Try again.
Black Cats, Magic Lamps, Witches, and Thrift Shops: What more could you want in a cozy?
Book 1: Mysterious Merchandise When Alice Adelcraft follows a black cat down an alley, she finds a street that wasn’t there yesterday. The sign reads “Magic Row,” and the stores have names like “Spellbinders” and “A Witch’s Thrift Shop.” Most intriguing of all is the dead body Alice finds behind a dumpster. She’s seen enough of the world to know that if she doesn’t stand up for the teen wizard orphan accused of the murder, no one will help prove his innocence. But, stepping into the Magic Row means posing as a witch, and being found out means facing a terrifying hex. Will Alice’s choice become the biggest mistake of her life or the best discovery of her lifetime?
Book 2: Bewitching Bargains Alice Adelcraft is pretending to be a witch on Magic Row, a street full of shops for those with magic. She has befriended the owner of A Witch's Thrift Shop, where a saleswoman has quit without notice. While the open position is good news for the teen witch, Hazel, whom Alice has recommended for the job, Alice can't help but wonder what happened to the employee, Mara Blest. Hazel and her twin brother, Zade, are sure Mara is missing. When Hazel and Zade's mother gets a hazy vision of a kidnapping and odd incidences begin to occur at the thrift shop, Alice worries she's placed Hazel in a dangerous position. Can she keep the twins safe? Or will uncovering the truth to Mara's disappearance unveil other secrets in Magic Row - including Alice's identity as an impostor?
Book 3: Wicked Wishlists When ordinary Alice Adelcraft met wizard Sebastian (Baz) Delvaux, he nearly hexed her for wandering into Magic Row. But, now that she's pretending to be a witch, Alice has gotten to know him and the rest of the magical community. She's even starting to like Baz, maybe more than she should considering he's engaged to a witch from a prominent magical family. Rich and powerful wizards like Baz live in their own social circles, but he's shown himself to be different. That's why she can't believe it when he is accused of murdering his uncle for his fortune. Can she prove his innocence without exposing her lack of magic? Or will she discover that on Magic Row, secrets are everywhere?
Book 4: Spellbinding Sales While the witches and wizards of Magic Row are preparing for a storm, Alice Adelcraft is searching for a warlock threatening her city. When a witness to the warlock’s crimes turns up dead, Alice believes Urbana is about to be hit by more than a hurricane. Her worst fears are realized when she is receives a warning: Surrender your magic or die. Alice has come to love the magical community, especially a certain wizard who hasn’t yet shown signs of returning the feeling, but she has no magic of her own. If only Alice's genie could turn her into a witch, then she might be able to protect the community. What’s more, Alice might understand why a seer says she is the key to saving Urbana—or destroying it.
Book 5: Vexed Vendors After a hurricane, the vendors of Magic Row are cleaning up. But with a warlock in the wind, some of them are considering clearing out of Urbana for good. The elite witches and wizards have come to catch the criminal warlock, O’Crowly, whose secret plans have the community on edge. For the first time since she entered Magic Row, Alice Adelcraft believes she has magic of her own to help her new friends. But Alice is showing no signs of talent in her lessons with the wizard Sebastian Delvaux, and her genie, Naveed, is no longer around. He’s ventured off with his newfound sister to find his missing family members. Naveed is no longer answering Alice’s wishes, which makes things all the worse when she discovers O’Crowly may still be after her. Will Alice unleash her inner witch in time to save her magical friends from the warlock’s evil plans?
続きを読む
Previous page
Next page
販売： Amazon Services International, Inc.
【買取サービス】 Amazonアカウントを使用して簡単お申し込み。売りたいと思った時に、宅配買取もしくは出張買取を選択してご利用いただけます。 今すぐチェック。