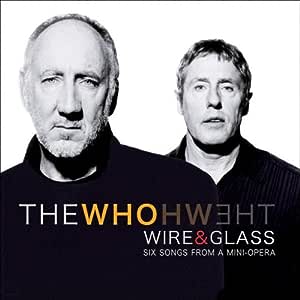 2. Pick Up The Peace

5. They Made My Dreams Come True

THE WHO Wire & Glass (2006 UK CD single featuring a 11-minute 6-track epic taken from their long-awaited 1st album in over 20 years and is itself part of the longer mini-opera The Boy Who Heard Music; it is as you might expect a record that is unmistakably The Who and yet at the same time sounds amazingly contemporary!)

We hum the same old lines to a different crowd

And everybody wants to cheer it

We run on endless time to reach a higher cloud

But we never ever seem to get near it

a music fan
5つ星のうち3.0 Too little too late
2006年7月27日に英国でレビュー済み
Amazonで購入
Pete Townshend has been agonising publicly (via his website)for a couple of years over his difficulty in writing appropriate music for the Who. The forthcoming album that this EP trails has been forthcoming for many months.

The best way to approach this record is to avoid comparisons with the band's output in its prime and to view it as a stand alone piece. Seen in this light the record is all the more disappointing. The songs are weak and recycle old progressions and cliches that Townshend has used ad nauseam. Most surprisingly the lyrics are uniformally poor. It had always been the case that you could rely on Townshend for stimulating and inventive lyrics even when the supporting music may have flagged. However, this time both the lyrics and the music confirm that Townshend is something of a spent force as a writer. For a benchmark, look to his last solo album Psychoderelict in the early 1990s. That record was panned critically and flopped commercially. Poor though the songs on the record were they sound fresh by comaparison with the segued songs on this EP.

To be specific: 'Sound Round' storms off with some bluster and energy and disintegrates in a lifeless chorus. 'Pick Up The Peace' starts with some promise and again nose dives in to a feeble chorus. 'Endless Wire' is a total waste of space with possibly the poorest Townshend lead vocal on record. 'We Got a Hit' rises above the first three songs but is nonetheless disposable and unmemorable. Nevertheless it is the best of the set of songs. 'They Made My Dreams Come True' features another lame Townshend lead vocal. 'Mirror Door' crunches out the tired old chord progressions to provide a sort of IndentiKit Who song. Its lyrics are abysmal.

Daltrey's vocals sound a little tired and the drop in his range and darkening of its timbre give rise to an erratic performance. Every now and then you hear a few phrases that remind you of what a marvellous singer he used to be and then he goes off the boil again. It almost sounds as if you are listening to demos with guide vocals and not the finished vocals that would come later. Despite this patchy performance, he really deserves better songs to get his teeth into. It is perhaps no surprise that these songs have already been dropped form the band's live set in favour of the old standards, as set in the context of those old songs these new offerings sound all the more weak.

So all in all a poor and disappointing record. If this was the work of a new unsigned band you really couldn't see them getting signed to a record label on the strength of this material and performance.

It's unlikely that the rest of the forthcoming album will be better, but one can only live in hope. To be honest, on the strength on this EP they could do with rewritng some of the material and taking more time to coax stronger vocal performances out of both Daltey and Townshend, but yo grt the fellingthat they just aren't capable of anything better, which is a shame.

D. Brink
5つ星のうち5.0 Great to have them back!
2006年11月4日にアメリカ合衆国でレビュー済み
Amazonで購入
When the Who released their last studio album, I was 2-years-old. 24 years later, we get the teaser of "Wire & Glass," in preparation for "The Endless Wire" (which came out this week in the States). "Wire and Glass" was a breath of fresh air to me. The Who's music pretty much got me through high-school and has seen me through a lot of difficult times. Sure, this sampler and the subsequent record aren't exactly "Quadrophenia" or "Who's Next." They don't HAVE to be though...if I want to hear those records I have them in my collection and can play them anytime. This one's just fine, and is definitly no rehash, nor an attempt to capture anything that isn't there anymore. If anything, it's an attempt to capture what happens when two rockers get older, lose their hair, lose their friends, and keep playing. In that sense, it's remarkable.

"Wire and Glass" is pretty much the cream of the crop of the "Endless Wire" record. Some good, strong material here. The record itself suffers a little from not using an outside producer, as Townshend's style's a little bit stuck in the 80's (but the GOOD stuff from the 80s, not the cheesy stuff). This record feels more like a Pete Townshend solo record with Roger Daltry singing on it...but that's pretty welcome, too. :)

This sampler's definitly worth picking up, if you're a collector, or if you just want to hear some alternate vocal takes (which I think are superior) from what ended up on the "final" product.

24 years is a long wait. This isn't the startling, significant, brilliant masterwork we were all hoping for...but it's a decent record, and if this is the best Townshend and Daltry can do in their 60s, it's certainly a lot better than what some of the other older acts are doing (I'm looking at YOU Paul McCartney).

Magicbus
5つ星のうち5.0 Who Are You? Who2!
2006年8月25日にアメリカ合衆国でレビュー済み
Amazonで購入
Focusing purely on the positive, this EP is a revelation. Pino Palladino is not just a bass player, he clearly was given the space to "play it his way" which to my ears is Extra Ordinary. There is an energy in this music that grows upon each listening and of course with increases in volume as well. The mix is very balanced, no smashing guitar histronics. Beautifully powerful vocals both sung and spoken from Roger who's voice has taken on an even larger quality in this new context, Who2. Great engineering of Rogers vocals I would add. The music itself does at times though subtle, harken back to a bit of Tommy, Sister Disco/Music Must Change, and Quadrophenia. I adore it and my 11 year old daughter who likes a few Who tunes (My 17 year old son loves them) found 2 pieces she quite liked including Mirror Door. 5 stars is a high ranking, yet less would be unfair considering the effort and the context. Lets hear what else they have for us, Lets See Action!
続きを読む
4人のお客様がこれが役に立ったと考えています
役に立った
フィードバックを送信中...
フィードバックをお寄せいただきありがとうございます。
申し訳ありませんが、お客様の投票の記録に失敗しました。もう一度試してください。
違反を報告
レビュー を日本語に翻訳する
その他の国際レビューを読み込む

K. W. Denebeim
5つ星のうち5.0 The WHO Do It Again!
2006年8月17日にアメリカ合衆国でレビュー済み
Amazonで購入
Yes, we all have been waiting a long time for the latest Townshend/Daltrey music. This prelude to the new album due in October of 2006 is truly a sign that they "DO IT AGAIN!" As the one of the new short tunes says, "good news, it's a hit!" Although Roger sounds a bit aged in his voice (he is 62 for gosh sakes), it's still clear and strong and most distinctive as ever. Pete will never stop with great material as every little tid bit of new music we get; we embrace as if it's a Christmas Day.

The Band includes John "Rabbit" Bundrick on keyboards as always and with the current tour line-up of Pino Palladino on bass, Simon Townshend (little bro) and long time WHO/Townshend/Daltrey producer/singer Billy Nicholls on Backing Vocals. But it's Peter Huntington (from PT's girlfriend, Rachael Fuller's band) on drums instead of Zak Starkey who was on tour with OASIS. It is Zak on tour currently but nonetheless, there is the line-up as listed on the back cover.

ALM
5つ星のうち5.0 Meet the New Boss Same as the Old Boss
2006年8月6日にアメリカ合衆国でレビュー済み
Amazonで購入
I thorougly enjoyed the CD once I got over the fact that it was a sample of the feast to come in October, not the actually feast itself that I thought I was ordering! That said, I bought my dad a copy, too. He is the reason this "Generation" X`er is a fan.

When I was going through my heavy hair metal stage in the mid80's, dad came to my bedroom door with a few albums in his hands, one of which was a Who album. He said that he swore he would never tell his kid to turn his music down, but said, "The stuff you're listening to, that's not music. THIS is music." Since then, I've developed into a bit of a Who fan, and managed to take him to their last tour as a Father's Day gift. We're going to try to get to their new tour, as well.

Daltry's unmistakeable, powerful voice is showing some wear on the highest register, but that is to be expected. Townsend continues to display his genius, both on his windmill/axe as well as a lyricist.

This album is yet another stage in their progression and evolution as artists who so long ago made us fans. The work is a bold statement that the Who are more than just surviving; they are making relevant music some thirty years+ in the making. All of their past is but prologue. I can't wait for the rest of the operatic feast.
続きを読む
8人のお客様がこれが役に立ったと考えています
役に立った
フィードバックを送信中...
フィードバックをお寄せいただきありがとうございます。
申し訳ありませんが、お客様の投票の記録に失敗しました。もう一度試してください。
違反を報告
レビュー を日本語に翻訳する