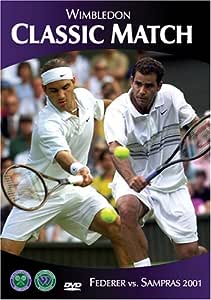 In many ways Federer is much like the man he succeeded at the All England Club in 2001.

Federer showed his former idol the door with a sensational performance. The fourth-round thriller ended Sampras' remarkable reign - at least for the moment.

Sampras held a set point in the opening tiebreaker, but Federer erased it with a service winner. Sampras then lost the set four points later when he dumped an easy backhand into the net, and the battle was on.

Wearing a bandana and ponytail, Federer looks nothing like Sampras but plays with the same stylish ease and seems comfortable at the net. Much of the time the modest and unassuming Swiss star had the better serve, and he confidently closed out the third set with three consecutive service winners and an ace that kicked up chalk.

Sampras played his best tennis in the final two sets, smashing serves at up to 136 mph and looking like the champion of old at the net. Serving in the final game, he misplayed two volleys and fell behind 15-40. Federer then played a superb return winner - something he had done repeatedly over the previous 3 1/2 hours - and fell to his knees with glee before keeling over onto the turf.

The usually composed player could no longer hide his emotions and broke down with tears of joy.