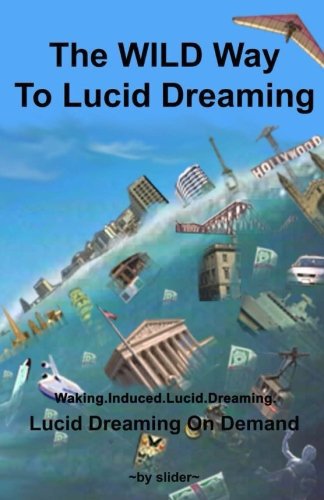 Kat
5つ星のうち1.0 Wanted to learn about WILD, experienced an ear-bashing about DILD
2018年12月7日に英国でレビュー済み
Amazonで購入
I bought this book after experiencing a WILD for the first time and wanting to read more about them. The writer is clearly an experienced lucid dreamer who has refined and honed his technique for successful lucid dreaming, and is very passionate about his method. However, I found this book to be mainly a bad-mouthing of DILD, standing off one against the other quite regularly and concluding each time WILD to be the best of the two. This point was first made very early on, and I found myself getting more and more frustrated as the book went on with this constantly being brought up.

I read the whole book, giving it a chance and I did find a few pages of really useful information about WILD. It was really nice reading the passion that came through from the writer sharing his experience. Those few pages were the highlight of the book, and something I feel that were a standalone to the rest. For the remainder, so many blanket statements were made about dream and sleep based on the writer's own personal opinions, most of which clashed with my own exploration of unconscious dreaming and lucid dreaming. I really love hearing people's thoughts and points of view, however when it leads to broad assumptions being made about other people, it feels extremely dismissive, and leads to a very "black and white", "right and wrong" view, which I find quite damaging, especially when making a connection is so important to me as part of the reader experience. It further concerns me regarding the divisive attitude that the writing style may nurture.

I have also read much more thorough and balanced introductions to lucid dreaming, which the first part of of this book focused on. Again there were many blanket statements and assumptions being made in a repetitive and long-winded way.

I partly made my purchase on all the five star reviews of this book. If other readers are in agreement with the reader regarding WILD and DILDs I can understand this. At the same time I feel the need to add a review from a completely different perspective. Had I seen the American Amazon reviews, which reflect my own concerns, I would probably not have purchased this book. When it comes down to the actual technique for WILD, I have found WILDs to be described in other LD literature to a similar level of detail as this book. Having found DILD to be a very successful method for lucid dreaming, and just wanting to learn more about WILD, I personally found this book to be a disappointing read.

FJ
5つ星のうち5.0 For Beginners I tell you >:3
2017年3月4日に英国でレビュー済み
Amazonで購入
I really like this book, it has a lighter and friendly approach to the subject and I was able to enter a low levels of lucidity after a week or so of being aware of my sleeping pattern.

In the dream I was washed ashore to a random island in a secret high tech facility of some sort. And I was able to instant dry my clothes XD but then I went on and succumbed to the dream in an unconscious state.

tompicton
5つ星のうち5.0 Call of the WILD
2018年6月4日に英国でレビュー済み
Amazonで購入
Very nice, the chapters of the book are a good-humoured and balanced look at lucid dreaming, the real gold being the method the author describes for wake-induced lucid dreams. Recommended, well worth the price if you can master what is a far less complicated sounding technique than DILD-doing.
続きを読む
役に立った
フィードバックを送信中...
フィードバックをお寄せいただきありがとうございます。
申し訳ありませんが、お客様の投票の記録に失敗しました。もう一度試してください。
違反を報告
レビュー を日本語に翻訳する

Marilyn Gabura
5つ星のうち5.0 Wonderfully written and easy to understand
2016年4月2日にカナダでレビュー済み
Amazonで購入
This book is a great way to learn more about our dreaming. It is written in a way that anyone can understand the concepts of the dreaming world. We all dream but some people might be surprised that we have more control over our dreams than we think. The author will explain how we can do that and even help you achieve lucid dreaming. Why should we care about lucid dreaming? The author will give you many reasons and some are actually very important to our well being.
続きを読む
1人のお客様がこれが役に立ったと考えています
役に立った
フィードバックを送信中...
フィードバックをお寄せいただきありがとうございます。
申し訳ありませんが、お客様の投票の記録に失敗しました。もう一度試してください。
違反を報告
レビュー を日本語に翻訳する

In the book, a single basic method for inducing lucid dreaming from a waking state is described. That method is presented clearly and succinctly, along with a couple of good relaxation techniques, and from what I know of WILD, it does seem to be a good method. However, the book only describes the author's personal method of WILD induction, and doesn't cover any other WILD induction methods (I know of some others).

One problem with the book is the speculative claims that go along with the basic WILD method presented. It irritated me how he repeatedly attacks DILD in ways which seem unnecessary and even factually incorrect. At times the author seemed willing to admit that DILD and WILD are merely two different routes to the same state of mind, while at other times he strongly implies that the state of lucidity obtained with WILD is somehow qualitatively superior, without ever stating exactly how. In my own considerable experience, I have found that DILDs can be just as coherent and as conducive to rational experimentation within dreaming as WILDs. I also disliked how he ignores most of the current scientific research into dreaming, and how he often did not provide references for factual claims made. So even as he offered a decent method for WILD, he also spread a bit of misinformation about dreaming in general, swept most scientific results about dreaming under the rug, and speculated a bit grandiosely on some hypothesized eventual "importance" for lucid dreaming, without ever explicitly stating exactly what he believes that "importance" might turn out to be.

Another good aspect of the book is that no particularly far-out claims are made, such as that from inside a dream state one can "see the future" or do "out of body remote viewing" (as is asserted in many books on lucid dreaming), although such possibilities are not totally rejected. In that respect, the book portrays a level-headed perspective.

The author does make clear that the major advantage of WILD - provided one is able to master it - is the ability to do lucid dreaming virtually at will, and to remain aware throughout the entire process, and that is truly an advantage. But in my opinion he seriously exaggerates both the ease of mastering WILD, and the overall importance of the achievement if one does succeed, for in the end, as exciting and interesting as it can be, even lucid dreaming is still only... dreaming.
続きを読む
24人のお客様がこれが役に立ったと考えています
役に立った
フィードバックを送信中...
フィードバックをお寄せいただきありがとうございます。
申し訳ありませんが、お客様の投票の記録に失敗しました。もう一度試してください。
違反を報告
レビュー を日本語に翻訳する

Dallin
5つ星のうち3.0 Save Your Money
2020年3月13日にアメリカ合衆国でレビュー済み
Amazonで購入
I was hoping to get solid instructions on how to WILD lucid dream. Instead, the author dedicated most of this book ranting against other lucid dreaming methods while raving about his personal method. He claims this method is easy (over 100+ times), yet I’ve had zero success. I wish there were good instructions on how to WILD lucid dream, but unfortunately, this is not one of them.
続きを読む
1人のお客様がこれが役に立ったと考えています
役に立った
フィードバックを送信中...
フィードバックをお寄せいただきありがとうございます。
申し訳ありませんが、お客様の投票の記録に失敗しました。もう一度試してください。
違反を報告
レビュー を日本語に翻訳する

Dr. Eoghan C. Ballard
5つ星のうち5.0 Worth the investment!
2018年1月11日にアメリカ合衆国でレビュー済み
Amazonで購入
The worst that can be said of this book is that it leaves you wanting more. On the plus side it is an excellent guide which will aid a great deal in reaching your goals. It is well worth the investment.
続きを読む
1人のお客様がこれが役に立ったと考えています
役に立った
フィードバックを送信中...
フィードバックをお寄せいただきありがとうございます。
申し訳ありませんが、お客様の投票の記録に失敗しました。もう一度試してください。
違反を報告
レビュー を日本語に翻訳する
その他の国際レビューを読み込む

june
5つ星のうち1.0 not recommended
2016年12月5日にアメリカ合衆国でレビュー済み
Amazonで購入
I'm giving this book one star because the author sets you up to fail by giving you a technique that is unlikely to work, tells you how easy it is and then criticizes a much easier and more widely practiced method of lucid dreaming which is dream induced lucid dreaming.This technique might have better odds of working if the author instructed you to attempt WILDs at a time of night when you are in REM sleep which is after 4-6 hours of sleep. He instead implies you can do this right at bed and it will work. This is highly unlikely as we don't go into REM sleep right away when sleeping at night. I think he found a technique that works for him (maybe) and so makes the false assumption that it is the best method and will be easy for everyone else. I do not recommend this book.
続きを読む
10人のお客様がこれが役に立ったと考えています
役に立った
フィードバックを送信中...
フィードバックをお寄せいただきありがとうございます。
申し訳ありませんが、お客様の投票の記録に失敗しました。もう一度試してください。
違反を報告
レビュー を日本語に翻訳する