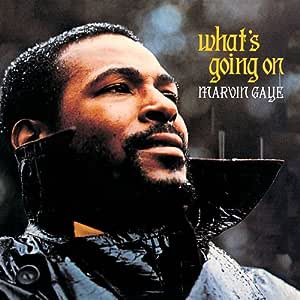 This 40th Anniversary Super Deluxe Edition contains 2 CDs + Vinyl LP + Gatefold Booklet with Rare Photos, Lyrics and New Essays.
Highlights include:
* A remastered version of the album plus 28 bonus tracks - 16 unreleased.
* Original mono versions of the LP's hit singles.
* A previously unreleased original `Quality Control test mix' of "What's Going On," mixed before Marvin had added strings, horns and additional vocals.
* Several pre-album outtakes, recorded while Marvin was "on strike," waiting for his single to be released, including "Head Title," now in unedited form for the first time.
* Several post-album instrumental jams with local musicians who included Ray Parker Jr. - a series of recordings made in Detroit before Marvin followed Motown to Los Angeles.
* The original single version of a sequel to the album, "You're The Man," as well as two alternate versions.
* The album's rare, original "Detroit Mix," previously issued on CD for the 30th anniversary, now on vinyl for the first time.

Limited 40th Anniversary Super Deluxe Edition contains two CDs, a vinyl LP pressing plus a gatefold Booklet with rare photos, lyrics and new essays. Highlights of this release include: a remastered version of the album plus 28 bonus tracks (16 unreleased), Original mono versions of the LP's hit singles, a previously unreleased original `Quality Control test mix' of "What's Going On," mixed before Marvin had added strings, horns and additional vocals, several post-album instrumental jams with local musicians who included Ray Parker Jr., the original single version of a sequel to the album, "You're The Man," as well as two alternate versions and so much more.

Mark Barry
5つ星のうち5.0 "...Where Love Is King..." - What's Going On by MARVIN GAYE (2001/2011 DELUXE EDITION 2CD Remasters)
2015年1月2日に英国でレビュー済み
Amazonで購入
Infused with a legend that only grows deeper as the decades pass - Marvin Gaye's 1971 album "What's Going On" is surely the cornerstone of every Soul lover's collection - a vinyl LP so engrained in our hearts that its probably impossible to review it with any real distance. And why the Hell would you want to. Some things are just beautiful - plain and simple. And this fabulous 2CD Deluxe Edition celebration of that Tamla Motown crown jewel only hammers that legend home with presentational and sonic knobs on. What an album and what an artist. Here's What's Happening Brother...

IN THE MEANTIME...
16. "Head Title" (aka Distant Lover) - Previously Unreleased

The 2011 reissue comes in a 2CD jewel case when the original 2001 issue was one of those chunky Deluxe Edition Card Digipaks in a plastic titled outer slipcase. The 32-page booklet reproduces the 'Family Photo Album' insert that came with original copies of the LP, there an intro from Smokey Robinson, an essay on the album called "A Revolution In Sound & Spirit: The Making Of What's Going On" by BEN EDMONDS of the Mojo Magazine, lyrics, notes on the Detroit Mix, Single Versions and after by HARRY WEINGER and comprehensive reissue credits. In between the text are outtake photos of Marvin playing football and training in the snow, taking a phone call and even getting a haircut (it's comprehensive!).

KEVIN REEVES (Disc 1) and SUHA GUR (Disc 2) - both long-time Universal Engineers - carried out the 24-bit remasters from originals tapes - and the sound is gorgeous - as warm and as lovely as you would have hoped for. The album broke the production line process at Motown and is heavily layered, deeply religious and spiritual in its feel and message - that all surfaces as the instruments, strings and voices surface in your speakers. The live set is not a great recording by any means but it is full of atmosphere and Marvin's band digging the new material. It feels like you're eavesdropping on musical history...

Chills race up my arms every time I hear the song "What's Going On" - possibly the most sublime opening tune on any album anywhere. It morphs into the double-whammy of "What's Happening Brother" and "Flyin' High (In The Friendly Sky)" - linked by rhythm and social messages. Marvin goes into full on preacher mode with "Save The Children" and ends Side 1 with another own-two sucker punch - the beautifully uplifting "God Is Love" and "Mercy Mercy Me (The Ecology)" (those strings and that sax solo). But the best is yet to come - Side 2. Marvin's worries for America and the World and his positive solutions for the same are name-checked in the sublime groove of "Right On" - a seven and half minute slice of magic that never fails to move me - forty-three years after the event.

The extras are a mixed bag as always. The liner notes explain that some oxidization on the tapes have produced drop outs and heavy amounts of hiss on the "Detroit Mix" of the album and indeed it's particularly evident on Side 2 - "Right On", "Wholy Holy" and "Inner City Blues..." But if I'm honest I can see why Marvin discarded this mix - there's just something missing. It could be that I'm so used to hearing the original that it makes an alternate hard to swallow. There's interesting vocal passages in "Inner City Blues" and a more prevalent rhythm section - but again it feels about as subtle as mallet.

Far more exciting is the live set. Recorded a year after the album's release - even his opening 13-minute "Sixties Medley" is done in a languid "What's Going On" groove - slow and mournful - with the band playing a blinder while he gets seriously Soulful on the piano (impressive playing). There then follows the whole of Side 2 - that finally sees the gig lift off into Donny Hathaway territory - the vibe and the crowd behind him and the funky groove. He even starts "Inner City Blues..." over again much to the crowd's clapping delight. Disc 2 ends with four winners - three single mixes and a Demo taste of the future. The B-side "Sad Tomorrows" is a version of "Flyin' High (In The Friendly Sky)" while I've always loved the Single Mix of "God Is Love".

So there you have it - a masterpiece given a worthy reissue. Even the front cover photo gives me the wobblies - what an album.

"Some of us feel the icy wind of poverty blowing in the air...heed the people's cries..." Marvin sang on "Right On". Our Soul Hero may be gone but the truth soldiers on...
続きを読む
32人のお客様がこれが役に立ったと考えています
違反を報告
レビュー を日本語に翻訳する

Tim
5つ星のうち5.0 Deep breath...An absolute lesson in modulation/key-change...
2015年9月15日に英国でレビュー済み
Amazonで購入
An absolute lesson in modulation/key-change. Take That and pop artists take note, you don't just change the key and insult people's ears, you change key whilst adding or removing percussive elements and changing tempo. For Marvin Gaye to produce this under the time constraints and the intolerance of Motown to publish this type of socially conscious music is nothing short of a period of true genius. The Beatles did something similar for Please Please Me, but I think this is more of a feat and is completely original material. It is a true album-work and is almost impossible to appreciate in the same way when cut up into tracks. It is seamless and never boring, with the feel of a live studio recording (which indeed it pretty much was, with the exception of a few overdubs). Modern artists are trying to plagiarise Marvin through lack of artistic vision and ability (notably Mr Pharrell Williams who has been sued for ripping off one of Marvin Gaye's songs in particular). People would like to have great engineers build their cars and design sound structural housing, so why do people enable such talentless tripe through encouraging shows like X Factor and listening to modern hip-hop, R & B and dance music, which can't produce a song without sampling music from Marvin's era (notably Nina Simone has been ripped off more than any other - with her music in about half-a-dozen car adverts, a David Guetta song and many others. As well as Whitney who has been ripped recently for her song Dance with Somebody). When this happens and is not credited upon every play, despite what may be said in contracts, it is nothing short of wrong and is in it's own way stealing. This album is the first and last of it's time, it taps into the social conscience and consciousness of America and is musically engaging at every moment. A work of complete genius, a word that is thrown about too much in this, the most arrogant era of human existence. Every generation has had to fight for freedom, rights, liberties, etc, but this Bieber generation just cannot see through their Facebook bedazzled eyes how clear the path has been left for them to be successful and make money, so it is no wonder in nearly every artistic or sporting field, people describe themselves and each other as 'genius' and 'the best ever'. Rubbish, you cannot compare this generation with preceding ones. It is factually wrong and disrespectful of preceding generations as well as a complete failure in noticing context and conditions and how they shape everything humans produce. There. Breath.
続きを読む
10人のお客様がこれが役に立ったと考えています
違反を報告
レビュー を日本語に翻訳する

Michael Rothwell
5つ星のうち5.0 This is going on...
2020年10月29日に英国でレビュー済み
Amazonで購入
Then eponymous title opener has a laid back background of a dinner party but its words say so much else. It is right to say it is a protest song done like a lived in piece of musical theatre and presentation. Poverty isn't far away. Feelings undeterred. Released by Tamla in May 1971 the album takes a loving eye to the sociological problems in which it attempts to address. Black rights were the 1960s agenda in inner-city USA. Black power of the Olympic athletes and the Black Panthers spoke of violence. Marvin Gaye speaks of love as the curative, the medicine required to heal hate. It's really an anti-hate record and I can't say anything against that as I agree with Gaye's approach. There are continuing musical leitmotifs going through the piece. Worth a listen; worth sharing.
続きを読む
違反を報告
レビュー を日本語に翻訳する