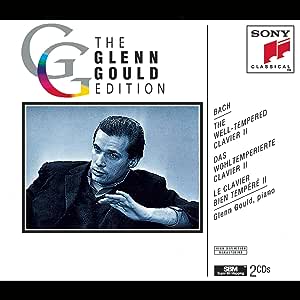 Glenn Gould's Bach is by now so ingrained in the 20th-century musical consciousness that it's almost hard to remember just how unusual his devotion to this composer was back in the 1950s and '60s when he first started making records. That his Bach recordings are still the standard by which all others are measured is a tribute to his self-awareness as an artist. If you are looking for the essential Glenn Gould playing Bach, then the three sets you really ought to have are his Goldberg Variations (either version), plus the two books of The Well-Tempered Clavier. Gould was simply incomparable in the contrapuntal intricacies of Bach's fugal writing, and in The Well-Tempered Clavier he has 48 opportunities to strut his stuff. He makes a show of every one. --David Hurwitz

Joseph Kline PhD, MD, MBA
5つ星のうち5.0 Uniquely Gould and a superb reference performance!
2014年4月5日にアメリカ合衆国でレビュー済み
Amazonで購入
Glenn Gould was iconic in everything he did, believed, played, and said. He would have gone down in history as just another nut if he hadn't been such an unbelievably magnificent Bach performer. This album of WTC II just confirms and perpetuates his status. You may not always agree with Gould's interpretations, but every one of them said something - usually new - about the piece. And so it is here. Gould's treatment of the Book II Preludes and Fugues is sometimes iconic, occasionally traditional, but ALWAYS musical, purposefully-performed, and deeply felt. There was a purity of mind and spirit when Gould performed. I considered it a privilege to have heard him in recital when I was in high school. It was mesmerizing, like each of his recordings have proven to be.

These discs display the superb technique of the pianist. Such precision. Was it not for Gould's almost spiritual manner with which he approached Bach, he would have been regarded only a digital gymnast -- his playing is that note-perfect. Occasionally his staccato will shock the listener, but for the most part what he plays is sublimely musical. The background is quiet. The piano sound is more natural. Overall, there is a sense that Gould had matured more than the brief two year break between recording Book I and Book II. Both as well as Tureck's accounts represent the Gold Standard for the WTC.

If you are already a disciple and don't have his WTC II, then by all means procure it with haste. If you for some reason are starting a Bach keyboard collection, this is an essential album. I almost envy the individual who listens to Glenn Gould for the first time. I still remember to this day the excitement I felt when I listened to my first Gould LP, the Partitas.

Don't be tempted to buy the anniversary edition as there have been complaints that the track listings have been royally screwed up!

This is one more magnificent Gould disc with the highest recommendation I can give!
続きを読む
違反を報告
レビュー を日本語に翻訳する

Bates
5つ星のうち5.0 Gould Is pure Gold
2010年8月6日にアメリカ合衆国でレビュー済み
Amazonで購入
I had a LP of Glenn Gould playing Bach's Well Tempered Clavier II around 1970.
The album cover accentuated the fact that Bach's keyboard works were being
played on a piano and how good Gould was at it.
I agreed with them, even with nothing, then or now, to compare it to
but I love it. It sounds like the same recording.

I also think it is Bach's exceptionally innovative works like this
that show how he inspired and influenced so many in western music
because these were written at such an early time in musical history.
(That title probably refers to Elliot Gould in "Mash", sorry,
but I thought it might have been on the album cover.)
続きを読む
1人のお客様がこれが役に立ったと考えています
違反を報告
レビュー を日本語に翻訳する

David
5つ星のうち5.0 Excellent Addition To Classical Music Set
2013年4月5日にアメリカ合衆国でレビュー済み
Amazonで購入
I bought this CD for a class I took in college, and it really lived up to the professor's expectations. At the time, I really didn't have much experience with Bach, but this really turned me on to order more music written by Bach and other classical composers as well.
続きを読む
違反を報告
レビュー を日本語に翻訳する
すべてのレビューを参照します
Amazonプライム会員ならお急ぎ便、日時指定便が使い放題
さらに、映画もTV番組も見放題。200万曲が聴き放題 。クラウドに好きなだけ写真も保存可能。
> プライムを無料で試す