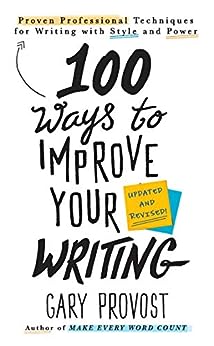 In any discussion of writing, the word style means the way in which an idea is expressed, not the idea itself. Style is form, not content. A reader usually picks up a story because of content but too often puts it down because of style.

You probably would not buy Ray Bradbury's book Dandelion Wine if while browsing in the bookstore you turned to version (A). Contrast it with version (B), Bradbury's actual opening paragraph. You will see that while both paragraphs contain the same information, version (B) has style, and that makes all the difference.

(A) There wasn't any noise at 6 a.m. and nobody was up yet. The wind was about the way you'd want it, and everything was pretty much okay. If you got up and looked out the window, you could tell that summer was beginning.

(B) It was a quiet morning, the town covered over with darkness and at ease in bed. Summer gathered in the weather, the wind had the proper touch, the breathing of the world was long and warm and slow. You had only to rise, lean from your window, and know that this indeed was the first real time of freedom and living, this was the first morning of summer.

Listen to What You Write

To write is to create music The words you write make sounds, and when those sounds are in harmony, the writing will work.

So think of your writing as music. Your story might sound like the Hungarian Rhapsody No.2, or it might sound like "Satisfaction." You decide. But give it unity. It should not sound like a musical battle between the Cleveland Symphony Orchestra and the Rolling Stones.

Read aloud what you write and listen to its music. Listen for dissonance. Listen for the beat. Listen for gaps where the music leaps from sound to sound instead of flowing as it should. Listen for sour notes. Is this word a little sharp, is that one a bit flat? Listen for intruments that don't blend well. Is there an electric guitar shrieking amid the whispers of flutes and violins? Imagine the sound of each word as an object falling onto the eardrum. Does it make a soft landing like the word ripple, or does it land hard and dig in like inexorable? Does it cut off all sound for an instant, like brutal, or does it massage the reader's ear, like melodious?

There are no good sounds or bad sounds, just as there are no good notes or bad notes in music. It is the way in which you combine them that can make the writing succeed or fail. It's the music that matters

Most real conversations, if committed to paper, would dull the senses. Conversations stumble; they stray; they repeat; they are bloated with, you know, like, meaningless words; and they are often cut short by intrusions. But what they have going for them is human contact, the sound of a human voice.

And if you put that quality into your writing, you will get the reader's attention.

So mimic spoken language in the variety of its music, in the simplicitity of its words, in the directness of its expression. But do not forfeit the enormous advantages of the written word. Writing provides time for contemplation. Use it well. In conversation the perfect word is not always there. In writing we can try out fifteen different words before we are satisfied. In conversation we spread our thoughts thin. In writing we can compress.

So strive to make your writing like conversation, but don't make it an ordinary conversation. Make it a good one.

This sentence has five words. Five-word sentences are fine. But several together become montonous. Listen to what is happening. The writing is getting boring. The sound of it drones. It's like a stuck record. The ear demands some variety. Now listen: I vary the sentence length, and I create music. Music. The writing sings. It has a pleasant rhythm, a lilt, a harmony. I use short sentences. I also use sentences of medium length. And sometimes when I am certain the reader is well rested, I will engage him with a setence of considerable length, a sentence that burns with energy and builds with all the impetus of a crescendo, the roll of the drums, the crash of the cymbals--sounds that say listen to this, it is important.

So write with a combination of short, medium, and long sentences. Create a sound that pleases the reader's ear. Don't just write words. Write music. . .

Gary Provost is the author of 100 Ways to Improve Your Writing.  --このテキストは、絶版本またはこのタイトルには設定されていない版型に関連付けられています。

Jason
5つ星のうち5.0 Very good book on improving your writing.
2017年11月27日に英国でレビュー済み
Amazonで購入
100 Ways To Improve Your Writing by Gary Provost, 1985 is short little book which packs a good punch. With 100 ways, ideas and suggestions to help improve any sort of writing, this book is a good little investment and gives you lots of things to think about, and things to pursue.

The book is split into 11 chapters, of which each ‘way’ (there is 100), so if you have just five minutes to spare, during a tea-break, you can learn something, and improve your writing. There are some good rules and guides for grammar, coupled with examples of good and bad forms. The chapter on editing is also informative, as are the 6 ways to avoid punctuation errors. An engaging book, with scatterings of humour and personality.
続きを読む
2人のお客様がこれが役に立ったと考えています
違反を報告
レビュー を日本語に翻訳する

Lucy c.
5つ星のうち3.0 Poor print quality, great content
2021年7月17日に英国でレビュー済み
Amazonで購入
This couldn’t be given as a gift - the book is smaller than A5 and the paper and print quality are very poor but the content is great!
続きを読む
違反を報告
レビュー を日本語に翻訳する

Trifoldhasslebland
5つ星のうち5.0 Perfect for writers
2019年1月30日に英国でレビュー済み
Amazonで購入
A great little book to keep with you, really helps in putting your plans together and gets rid of writers block.
続きを読む
違反を報告
レビュー を日本語に翻訳する