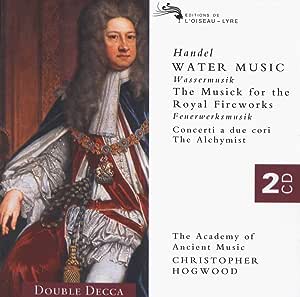 This is a fine Handel compilation that provides a nice overview of his orchestral music with brass instruments, as well as his only incidental score (music written to accompany the action of a play). Christopher Hogwood uses the arrangement that Handel made of the Fireworks Music for normal-sized forces, including strings, which were absent from the original. All the music is played with a fine sense of style, and a goodly bit of the "pomp and circumstance" that Handel above all others knew how to capture in music. At two discs for the price of one, this is an extremely good deal. --David Hurwitz

E. L. Wisty
5つ星のうち4.0 Unless you've been living under a rock all your life...
2016年1月26日に英国でレビュー済み
Amazonで購入
...you'll have been subjected numerous times to the "Alla Hornpipe" from the Water Music and "La Réjouissance" from the Music for the Royal Fireworks. And not without good reason to be fair, have the Water and Fireworks Music become so popular. On this double disc set the two sets of works are accompanied by music from the revival of Ben Johnson's play "The Alchymist" in 1709 (the music from the extended overture of Handel's opera Rodrigo having been pirated and made its way to England the year before Handel himself did) plus three late concertos (probably for performance in the intervals of oratorios) and two 'arias' for wind band about which little is known but were probably written in the 1720's.

Anything by the Academy of Ancient Music under the late Christopher Hogwood is almost guaranteed to be a top class performance. Recorded in the late 70's and early 80's, performed on period instruments, the sound quality is very good, though perhaps a bit of indistinctness in the horns. But at the knockdown price this set is going for (not much more than a couple of quid at the time I bought it) there's no reason not to choose this if you are building a Handel collection or indeed just want a recording of the Water and Fireworks music.

Jack London
5つ星のうち5.0 Authentic sounds at a great price...
2020年9月4日に英国でレビュー済み
Amazonで購入
I specifically wanted the Water and Fireworks music played on instruments of the age, so this was a no-brainer, given the price and reputation of the conductor and orchestra. Together with the other pieces included and the quality of the recording, I think these CDs represent excellent value and I am very happy with it.[
続きを読む
違反を報告
レビュー を日本語に翻訳する

Kindle Customer
5つ星のうち5.0 Great Music
2018年4月22日に英国でレビュー済み
Amazonで購入
One of my favourite pieces of music, and the version that I most love. I had this recording on vinyl and have nothing to play it on, so I can now listen again. In my opinion, no other versions come close to this one.
続きを読む
違反を報告
レビュー を日本語に翻訳する

Martin
5つ星のうち5.0 Five Stars
2017年12月6日に英国でレビュー済み
Amazonで購入
I bought this AAM performance of Händel's Water Music when it was first issued on LP. Excellent to hear it again plus the Fireworks and other pieces. Five stars for value, too.
続きを読む
違反を報告
レビュー を日本語に翻訳する