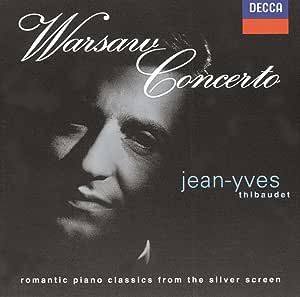 Mr. P. R. L. Robinson
5つ星のうち5.0 Beautiful performance.
2017年6月30日に英国でレビュー済み
Amazonで購入
If you really cannot put up with the crackle and hiss of the soundtrack recording of the Warsaw Concerto (Louis Kentner/Muir Mathieson 1941) then Jean-Yves recording runs a close joint second along with Patrik Jablonski and the Polish Radio Orchestra, unfortunately both the Jablonski and Kentner recordings are getting hard to find.
続きを読む
2人のお客様がこれが役に立ったと考えています
役に立った
フィードバックを送信中...
フィードバックをお寄せいただきありがとうございます。
申し訳ありませんが、お客様の投票の記録に失敗しました。もう一度試してください。
違反を報告
レビュー を日本語に翻訳する

Robert Ritter
5つ星のうち5.0 Excellent performances.
2013年5月19日に英国でレビュー済み
Amazonで購入
Thibaudet is a fine pianist and his technique is amazing; the orchestra is excellent too. The selection of music on this disc is really nice. It was my first time listening to the Warsaw Concerto and I love it. =]
続きを読む
8人のお客様がこれが役に立ったと考えています
役に立った
フィードバックを送信中...
フィードバックをお寄せいただきありがとうございます。
申し訳ありませんが、お客様の投票の記録に失敗しました。もう一度試してください。
違反を報告
レビュー を日本語に翻訳する

Double trouble
5つ星のうち5.0 Movie Music, Movie programmatic themes to inspire dreams !!!’s
2019年6月26日にアメリカ合衆国でレビュー済み
Amazonで購入
The program for film music compiled for this CD’s musical compositions has been of thematic music styles inspired for, and composed by, Richard Addinsell’s film score for the 1941 British RKO feature film “Dangerous Moonlight” (released as “Suicide Squadron” in U.S.A.) — “The Warsaw Concerto” — the first (1) CD’s spin! The second (2) spin, Rachmaninov’s 1901 “Piano Concerto No. 2 in C minor, Op. 18,” (excerpt) 2nd movement, “Adagio Sostenuto” — used as two later films’ cinematic musical background themes, (1953’s “The Story of Three Loves,” 1993’s “Grounding Day”), is actually related to “The Warsaw Concerto” in retrospect. Producers’ for the British film had requested Rachmaninov to compose a NEW piano (3 movement) concerto for their feature film, and had been turned down. Richard Addinsell was then contracted to compose the film’s piano concerto, required for the film’s central Polish protagonist, Stefan ‘Steve’ Radetsky, (Anton Walbrook, who had formerly aspirations as a classical pianist), whose principal objective in the story, composing a piano concerto. Addinsell, and his orchestrator arranger, fulfilled their objective by creating a “sound-bite-style” film score imitating Rachmaninov’s complex 2nd Piano Concerto’s score and orchestration. Although in the film’s story line, the film’s protagonist is composing a three movement symphonic-piano concerto, Addinsell only composed melodic themes for each of the film’s central character’s, their - background theme music. Upon the film’s completion and success, Addinsell had composed, combined each theme, into a complete first movement piano concerto. This piano concerto was never performed in the completed “released” feature film’s screen-time length! The success of the 1941 and film public’s demand, the “Warsaw Concerto” - as a stand alone piano concerto, became available in sheet music, and released on vinyl platter as the film’s archival recording. Incredible to the success of Addinsell’s composition is the longevity of it’s success in performance and in repeated repertoire concert programming. Following in the mid 1950’s, entertainer “Lee” Liberace included the composition in nearly every engagement in his career, which guaranteed, extending, the presumed life of this piano concerto. Hollywood’s MGM Film Studios’, extraordinarily talented pianist talent, Oscar Levant, included the concerto in his repertoire, often performing the concerto at the Hollywood Bowl. The 1941 film score was conducted by Muir Mathieson, Louis Kentner (uncredited) performing the piano with the London Philharmonic Orchestra. After the film’s “Warsaw Concerto” recording was released, Kentner realized he would not receive any royalty sales, quickly changing his mind, listing his name to this recording credits. Although actor Anton Walbrook was photographed performing the composing, Louis Kenton’s hands were used for close-up piano keyboard insert shots. Concert Pianist Jean-Yves Thibaudet performs both of these compositions, delivering breath-taking keyboard nuances to each composition. Interestingly, Thibaudet’s delicate piano technique presents a performance of the “Warsaw Concerto” and the Rachmaninov “Second Piano Concerto” with a masterly light touch, comparatively, less bombastic and heavy, as most pianist’s level of approach and keyboard attack usually prevails for the two compositions.
The third (3) spin - “Rhapsody on a Theme of Paganini” composed and orchestrated by Rachmaninov in 1934, also, relates to Addinsell’s film score orchestration for the “Warsaw Concerto.” Followed by (4) - George Gershwin’s composition “Rhapsody in Blue” (1945’s Rhapsody in Blue, 1977’s Manhattan). (5) - Shostakovich’s “Piano Concerto No. 2” (excerpt) concludes the CD’s film musical’s program.
Richard Addinsell’s piano concerto masterpiece composition for the 1941 RKO British film, “Dangerous Moonlight” (Suicide Squadron”) — “Warsaw Concerto” — has been performed and maintained in a pianist’s performance program repertoire consistently. Sadly, Richard Addinsell never returned to his piano concerto, to expand nor to develop the composition — into a three movement symphonic-piano concerto.

M. B Hazen
5つ星のうち5.0 Lovely Listening
2013年9月9日にアメリカ合衆国でレビュー済み
Amazonで購入
If you seek a chance to hear Jean-Ives Thibaudet, go enthusiastically. As he gets ready to play, you can chuckle at his red socks that seem to be his good luck charm.His music is well-textured, alive, and vibrant. He has limited himself to solo piano, but also goes a bit into jazz. A friend of mine had heard the "Warsaw Concerto" long ago and wanted a new one. I chose this recording, which also has Rachmaninoff's "Rhapsody on a Theme of Paganini" on it. She loves it, and plays it often for lovely listening!
続きを読む
3人のお客様がこれが役に立ったと考えています
役に立った
フィードバックを送信中...
フィードバックをお寄せいただきありがとうございます。
申し訳ありませんが、お客様の投票の記録に失敗しました。もう一度試してください。
違反を報告
レビュー を日本語に翻訳する

Sort of forgot about it for many years - my choice in music resulted in stations and CD's that seemed to ignore this, and nobody seems to ever play that movie anymore.

Then I bumped into it here on the web. Immediately jumped over to Amazon to try to order a copy. No regrets!