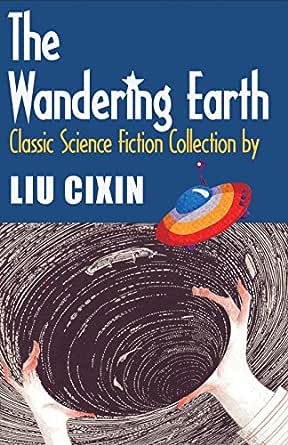 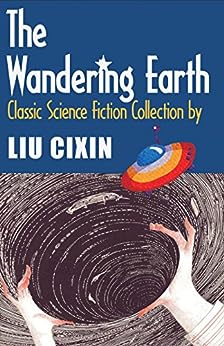 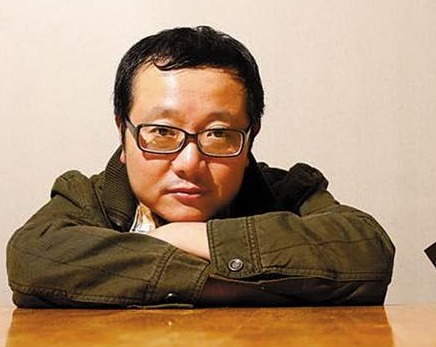 The above depiction was chosen from this anthology of short stories by Liu Cixin, Hugo Award winner of 2015, China's most acclaimed contemporary science-fiction author. Unabashedly classic in the great tradition of Asimov and Clarke, Liu Cixin's science-fiction is firmly rooted in the cosmic. He uses the unique perspective of science-fiction to take us on a journey into this majestic, desolate cosmos. It can be terrifying to contemplate the end of our world and stories that describe such destruction can be disturbing. At the same time however, they can leave us feeling not only entertained, but exhilarated and inspired. Maybe, they can even give us a chance to renew our love of life. Most stories found in the “The Wandering Earth” collection take us to a sci-fi vision of Earth's end. In the short stories, the dangers humanity faces are much stranger and whimsical than aliens, though aliens could be found everywhere in his books.

-----------------------
Reviews
Liu Cixin's writing will remind SF fans of the genre's golden age, with its positive focus on scientific development, combined with a consistently constructive vision of China's future role as a global superpower. It's characteristic of an SF genre which has been embraced by Chinese culture because it is seen as representing the values of technological innovation and creativity so highly prized in a country developing more quickly than any other in the world today.
– Damien Walter, The Guardian

A science fiction tale with a Chinese touch. The Wandering Earth is filled with imaginative tech and a moving world, literally.
– Indiebookoftheday.com

With Her Eyes
China Galaxy Science Fiction Award of Year 1999

1The Wandering Earth
2Mountain
3Of Ants and Dinosaurs
4Sun of China
5The Wages of Humanity
6Curse 5.0
7The Micro-Age
8Devourer
9Taking Care of Gods
10With Her Eyes
11The Longest Fall

Foxof
5つ星のうち5.0 This is not a review....
2016年8月22日 - (Amazon.com)
Amazonで購入
This is not a review. If you want to read about the content of the "The Wandering Earth" short story collection, the style of Cixin Liu's writing, or any kind of qualitative analysis I think you will very easily be able to find a great many alternatives.

Rather, I would like to use my small forum here to attempt to convey something far more difficult to articulate: a single echoing sentiment--a reverberating feeling drummed up by Cixin Liu's stories, now permanently wedged in my psyche. Before I even begin, I must accept the fundamental impossibility of this endeavor--the true taste of a thing so ephemeral and personal cannot be translated from one person to another without fundamental changes, alterations, omissions and occasional additions of meaning. So, therefore, I shall attempt brevity.

Cixin Liu is a "big idea" science fiction writer at a level precious few can aspire to. His strength is not the effortless grace of raw prose, unexpected machinations of plot, nor the alluring draw of living characters. He writes speculative fiction from the most fundamental premise: what would it be like if X were to happen?

What would happen if human civilization still dwelt on the Earth when our Sun finally transitions to a red giant, fundamentally altering the geography and ecology of the Solar System? What would happen to human societies if pure capitalism was allowed to evolve freely, in its most ideologically pure state? What would happen if space travel became so routine that skilled laborers might find themselves in orbit, bereft of the mighty educations and intellects of the first astronauts?

Each question opens up new and interesting possibilities, and Cixin Liu explores them perfectly. While his novels are indeed formidable works in their own right, he is an author whose last, best destiny is the short story. Liu joins his powerful imagination with a keen understanding of human nature, history and science to present us with plausible scenarios that are at every time both immediately familiar and utterly bizarre. He is as Isaac Asimov and Arthur C. Clarke were: a titan of the genre, who eclipses almost everyone else.

To be honest, I never thought I'd encounter another author capable of imbuing in me that unstilled sense of wonder that Clarke and Asimov did in the days of my childhood. But I was--beautifully and unexpectedly--proven wrong. If you look for fiction focused on characters or plot or setting you may not find much of any great worth in Liu's work... but if you adore science fiction for the very idea of it, for the wonder and prescience and transcendentalism it can sometimes reach, these short stories are absolutely vital and necessary.

H.W. Taylor
5つ星のうち5.0 Imaginative and Heavy Sci-Fi
2018年11月1日 - (Amazon.com)
Amazonで購入
Cixin's strengths are taking the familiar tropes of sci-fi (a dying sun, the arrival of aliens) and pairing them with such a staggering scientific solution of such minute calculative satisfaction that you can't help but root for the plucky protagonists. Each story carves out a new world and situation and each time I'm amazed at how quickly I was sucked in. Excellent short fiction. I can't wait to try some of his longer form storytelling.
続きを読む
8人のお客様がこれが役に立ったと考えています
レビュー を日本語に翻訳する

It is not immediately apparent but this book is a collection of the following short stories available on Amazon so it is not necessary to buy each one individually. 1-The Wandering Earth, 2-Mountain, 3-Of Ants and Dinosaurs, 4-Sun of China, 5-The Wages of Humanity, 6-Curse 5.0, 7-The Micro-Age, 8-Devourer, 9-Taking Care of Gods, 10-With Her Eyes, 11-The Longest Fall.

Y. Yu
5つ星のうち4.0 Obviously I like some stories better than others
2016年10月9日 - (Amazon.com)
Amazonで購入
I'm an absolute fan of Liu Cixin and I have read his works in Chinese before. Obviously I like some stories better than others, but overall this is a very enjoyable collection. If you're now discovering this collection because you have just read Three Body trilogy, I think you will not be disappointed. You'll also see some of the themes explored in Three Body echoed here in his shorter stories.

In fact, I'd even say I love Liu's short stories more so than his longer novels because they are perfect testaments to his strengths (creativity and imagination), while at the same time concealing his weaknesses (characterization, pace).

The original stories deserve five stars, no question of it. However, for this translation, I'm taking off one star for the carelessness in editing (typos, missing punctuations, etc).

Dave Rankin
5つ星のうち3.0 Wildly interesting what if scenarios but weak fiction.
2019年2月22日 - (Amazon.com)
Amazonで購入
If you're the kind of science fiction fan who likes wild and interesting scientific extrapolations, like how would humans move the Earth if they knew the sun was going to burn it to a crisp in about 300 years, and you don't care too much about fiction stuff like character, plot, themes, and such, you'll like this. I did.
続きを読む
3人のお客様がこれが役に立ったと考えています
レビュー を日本語に翻訳する
Amazon.comのカスタマーレビューを見る(72) 5つ星のうち4.6
click to open popover
Amazonプライム会員ならお急ぎ便、日時指定便が使い放題
さらに、映画もTV番組も見放題。200万曲が聴き放題 。クラウドに好きなだけ写真も保存可能。
> プライムを無料で試す