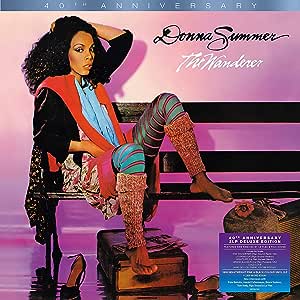 JF Rodriguez
5つ星のうち5.0 Great Deluxe Reissue
2020年10月20日に英国でレビュー済み
Amazonで購入
Donna's next album after her groundbreaking critically acclaimed masterpiece best selling No 1 album 'Bad Girls', 'The Wanderer' was bound to be a tough act to follow. It's great to see this underrated album being given the deluxe treatment and beautifully remastered 40 years later. It sounds as fresh it did all those years ago! The song 'The Wanderer' was the lead single at the time it was released but 'Looking up', 'Grand Illusion', 'Breakdown' and 'Night Life' are far superior tracks in my opinion which are given here (except 'Breakdown') the extended/remix treatment. There are two remixes of 'The wanderer' as well. The remixes are interesting and give a more contemporary feel to the songs which is obviously the goal here. Personally I prefer the songs as they were originally produced and I am not too keen on the album being presented here on a single CD with re-sequenced tracks: 3 remixes first followed by the original album and concluding with another 4 remixes. Small hitch for a purist like me but the remixes should have been on a separate disc in my opinion. Both the outer and inner packaging are nice and the set also features an extensive liner note essay with plenty quotes from some of Donna's collaborators, lyrics, photos, credit notes etc... Even if, like me, you are not religious and a fan of gospel you will love 'I believe in Jesus'. A must buy for fans and an opportunity to rediscover this amazing piece of work.
続きを読む
違反を報告
レビュー を日本語に翻訳する

C. Harrison
5つ星のうち5.0 The wanderer returns!
2020年10月19日に英国でレビュー済み
Amazonで購入
I bought this album on the day of release 40 years ago, I never understood why it didn't reach the heights of her previous albums as in my opinion it's one of her most innovative albums. This version adds the remixes which do give it a contemporary twist, hopefully it will reintroduce the album to a new generation and give it the recognition it so deserves.
続きを読む
違反を報告
レビュー を日本語に翻訳する

JUSTSAYJOE
5つ星のうち5.0 Very Nice Vinyl Reissue of Donna Summer's Unsung Masterpiece
2020年10月23日にアメリカ合衆国でレビュー済み
Amazonで購入
My grandmother bought me this for Christmas in 1980 when I was 10 years old. I remember that I found it under her bed while snooping and was so excited to see the new Donna release, who was then my favorite singer. When I finally got my hands on the record I played it and I just didn't get it. This new Geffen release didn't sound like my beloved Casablanca disco lps, it wasn't disco, it was rock. I liked the album ok (especially Looking Up, Nightlife, Running for Cover) but like the general public I lost interest quickly. For many years I always saw this lp in the cut-out bins.

Years later I revisited The Wanderer and over time it has become my favorite Donna album. It is a deeply personal and dynamic album showcasing Donna's incredible versatility as a singer. The themes of the music (survival, fame, god, fidelity) are all there and they come together to tell a rich story. The production still sounds fresh and the lyrics still resonate.

So is this reissue worth it? On vinyl yes, on cd not so much. The remixes are fine and I find it hilarious how upset purists get at them. If you have the fabulous 2014 reissue on cd you don't really need this. I bought this because I wanted a new vinyl of this classic. The music sounds great, the colored vinyl is cool, love the lyrics within the gatefold and the very detailed liner notes. I do wish they did not plaster the cover with "40th Anniversary" and that the graphics and inserts were glossy not matte. But these are minor quibbles. If you love this album or want to invest some time in it then you should grab it (before it goes out of print).
続きを読む
違反を報告
レビュー を日本語に翻訳する
すべてのレビューを参照します
Amazonプライム会員ならお急ぎ便、日時指定便が使い放題
さらに、映画もTV番組も見放題。200万曲が聴き放題 。クラウドに好きなだけ写真も保存可能。
> プライムを無料で試す