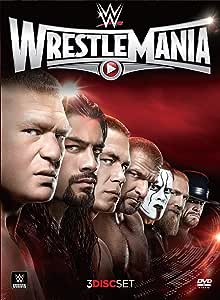 Richard Morton
5つ星のうち4.0 Better than expected
2015年9月17日に英国でレビュー済み
Amazonで購入
Wrestlemania 31 had perhaps one of the weakest build ups for a Wrestlemania ever - heading into it with low expectations, the show itself actually exceeded them for me. The impressive (if sometimes ridiculous) production values, the big show atmosphere and the hard work of most of the in ring performers made it a decent event. Not classic but decent.

As is customary these days with the Blu Ray release, you get the full show on disc one and the Hall of Fame on disc two. Two matches from the kick off show are thrown in as usual but there's not much more of note. I've listed the card and the extras below with a few comments....

Seth Rollins v Randy Orton - Enjoyable effort from these two, not exactly a show stealer but good solid stuff with an inspired ending.

Sting v Triple H - Mixed feelings about this one. Not how I expected it to go down and I'm not convinced the result is exactly best for business (you won the Monday Night War boys, get over it). The run ins and add ons are kind of fun though so perhaps it's best not to overthink it. The less said about Trippers entrance, the better.

Rusev v John Cena - US Title - Just when you thought Triple H had tied up the award for most ridiculous entrance of the night, Rusev rolls up in a tank. Like with the IC strap earlier it's an interesting effort from WWE to try and make the secondary titles seem relevant again. The match itself is good enough despite the eye rolling predictability of it all.

Next up is an in ring segment where Steph and Triple H come out for a bit of gloating before they're joined by The Rock (!) and then Ronda Rousey (!?). It's a bit of a laugh and gets a good reaction but it does run a bit long at over 20 minutes.

Bray Wyatt v Undertaker - Maybe it's because the streaks no longer on the line, maybe it's because Bray isn't quite capturing the imagination like he was a year before or maybe it's the bright, broad daylight setting but this doesn't have quite the magic it may have had at a previous Wrestlemania. That's not to say I didn't enjoy it, it has its moments and a strong finishing sequence.

Roman Reigns v Brock Lesnar - WWE Title - They tried long and hard to get Roman over with the hardcore fans. Didn't work did it? He gets booed out of the arena here even though, to be fair, he enters a suitably spirited display as Brocks punching bag. It's one of the stranger Wrestlemania main events but I think it works - aided largely by the twist in the tale.

Kick Off Show - Andre the Giant Memorial Battle Royal - Some of the talent seems wasted here but despite it all, there's still a guilty pleasure element to Battle Royals somehow. Most notable here is the break up of The Miz and Mizdow which gets a huge pop from the crowd. Then there's the eventual, tiresome conclusion. Which doesn't.

Hall of Fame - Kevin Nash, Tatsumi Fujinami, Alundra Blayze, The Bushwhackers, Larry Zbyszko, Connor The Crusher, Rikishi, Arnold Schwarzenegger and Randy Savage are the inductees this year. The induction of Macho (accepted on his behalf by brother Lanny) was the highlight for me in a show that runs for nearly four hours. He probably should have been the headline act but such is life - that honour went to Kevin Nash this time out.

Scott
5つ星のうち4.0 Wwe
2015年6月6日に英国でレビュー済み
Amazonで購入
This wwe wrestlemania 31 this DVD is one of the best wrestlemania ever yes yes yes . And if you won't to no about the delivery well it not that bad get. Came two days later I hope this helps .
続きを読む
違反を報告
レビュー を日本語に翻訳する
すべてのレビューを参照します
Amazonプライム会員ならお急ぎ便、日時指定便が使い放題
さらに、映画もTV番組も見放題。200万曲が聴き放題 。クラウドに好きなだけ写真も保存可能。
> プライムを無料で試す