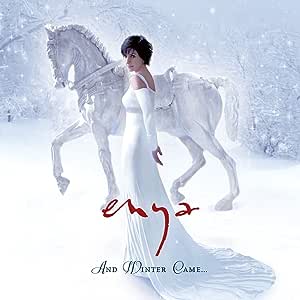 Twenty years after her landmark Watermark album, Enya's seventh studio disc, And Winter Came continues a phenomenally successful career that has included more than 70 million albums sold worldwide. And Winter Came is an enchanting evocation of the changing landscape of winter as well as the festive cheer of the holidays. One of the most successful female artists of all-time, and second only to U2 as the biggest selling Irish artist in history, Enya brings her beguiling and ethereal music to bear on the darkest and yet most hopeful season with And Winter Came.

Yogi bunny
5つ星のうち5.0 Beautiful
2019年1月7日に英国でレビュー済み
Amazonで購入
Received and Winter came from my Hubbie for Christmas, haven't stopped playing it since. Just beautiful, I find the album quite spiritual track 1 & 2 are my favourites but to be honest I love them all and would highly recommend this album.
続きを読む
5人のお客様がこれが役に立ったと考えています
違反を報告
レビュー を日本語に翻訳する

marie shutt
5つ星のうち4.0 Lovely album, with many angelic,charming and haunting melodies, but quite diverse songs.
2015年7月27日に英国でレビュー済み
Amazonで購入
I really was quite excited as I received Enya's latest studio album , to date,2008, (excluding The Very Best Of which is brilliant)( and I hope it's not too long before maybe another album is released?). Don't let the winter theme put you off- I was (inbetween two days of rain) enjoying the song White Is The Winter Night in July with the sun shining the other day! After the album Amarantine, which I was disappointed with (and least favourite album), I feel Enya has come up with a with something wonderful and a joy to listen to here!When i heard the opening track And Winter Came- I instantly felt the magic of Enya had returned- this is my favourite song on the album. There isn't ! track I don't like, and Enya often sounds more angelic too- I guess the only thing I miss are there being just a few more songs where they are more so mainly just instumental though-but nonetheless- I really do recommend this album! Tracks 2 and 5 are other personal favourites- and 11. My! My! Time Flies! is quite unique- see for yourself!
EDITED
THIS IS NOT MY 2ND FAVOURITE ALBUM, WATERMARK AND SHEPHERD MOONS ARE CLASSICS, AND NO OTHER ALBUM IS QUITE IN THEIR LEAGUE, HOWEVER , THIS IS STILL A MUST FOR ANY ENYA FAN, AND WHILST THERE ARE SOME TRACKS I AM LESSER KEEN ON- IT IS STILL BEAUTIFULLY PUT TOGETHER AND RECOMMENDED.
続きを読む
3人のお客様がこれが役に立ったと考えています
違反を報告
レビュー を日本語に翻訳する

Cloudberry
5つ星のうち5.0 Another beauty!
2010年1月10日に英国でレビュー済み
Amazonで購入
Having listened to this album for a year, even during the summer months, and then reading the reviews by others, I found myself agreeing, particularly, with two of my fellow reviewers. As Lee Kaay said, "other reviewers have missed the point." Remember, "this is Enya, not different Enya". If you REALLY like Enya, why would you want something different? Me, I don't want anything different, I want her, in all of her glory - and this is a glorious album. In fact, this album is probably second only to Watermark, if not THE best.

Then, there is Julia Gemstone. I am not a stressed parent (my two lads have flown the nest), but I agree entirely with her when she says she loves Enya and find her music soothing. I find great peacefulness in her music. Strangely, I am not a fan of Christmas, but do like Christmas music; but I think this album, as the title states, goes beyond Christmas and goes into the whole winter season.

I find the whole album has great warmth and a variety of textures. It also feels like an album accessible to all - the children would like "One Toy Soldier", those who like a bit of tempo in their music have "My! My! Time Flies!" and "Trains and Winter Rains" to listen to, whilst those who want a hymnal slant can have the beauty that is "O Come, O Come Emmanuel" and the fantastic new, Chorale version of "Oiche Chiuin" (Silent Night in gaelic).

For us old romantics, I think the highlights of this album, and tracks I just can not stop playing are "Dreams Are More Precious" and "Last Time By Moonlight" - in my opinion, the two best tracks I have ever heard from Enya. The first has such beauty in the lyrics and are wonderfully sung as a single voice; the second, as with other tracks on this album, has a whole choir of Enya and is just the most magically romantic song - I get goosebumps listening to it.

Yes, I know it's all subjective and it may not be everyone's cup of tea, but I find this to be a beautifully produced album, with stunning music, singing and instrumentation. The CD booklet is even a masterpiece, in snow white, with great pictures of our heroine and containing Roma Ryan's lyrics.

For me, this is sheer bliss - New Age music at its very best. Thank you, Enya. Some may have doubted whether you, Roma and Nicky Ryan, still had the ability to come up with another great album, but you've done so here with something bordering on superlative. What I want now is a DVD of all the tracks....or is that one request too far?
続きを読む
9人のお客様がこれが役に立ったと考えています
違反を報告
レビュー を日本語に翻訳する

Big Red
5つ星のうち5.0 Not a novelty - very good CD
2008年12月15日に英国でレビュー済み
Amazonで購入
Don't be put off by any Christmas novelty vibes that you might be getting from this new Enya CD - it is very good. In fact I would say it is one of her best, a return to form after Amarantine which although good I found a little odd and dull.

The slow songs here are top quality, helped by the inclusion of traditional music (shame she didn't save the Christmas tracks on the expanded Amarantine for this CD). There are some real stunners here. I'm not overly fond of the new upbeat ones though, apart from My My Time Flies which is a jaunty grower (and features electric guitar!) The early track order does jar slightly, with a traditional song sandwiched between two upbeat numbers, but I soon got used to that.

If you're wondering where you might have heard the opening instrumental before, I can help you out. It was originally called 'Midnight Blue' and to my knowledge only appeared on the Wild Child CD single. It's a shame this is recycled but it's a good track, as good as the other CD openers, so it has now taken its rightful place.

In summary, as good as her other CDs, no major departure apart from the winter/Christmas theme.
続きを読む
6人のお客様がこれが役に立ったと考えています
違反を報告
レビュー を日本語に翻訳する

Hatherleyman
5つ星のうち5.0 And winter Came....And went out of my mind. My loss!
2015年11月21日に英国でレビュー済み
Amazonで購入
I bought this album as soon as it came out in 2008. I've just bought another copy for a friend this Christmas, which i will give her with the new 'Dark Sky Island' release. I've got all Enya's albums, my favourite being 'The Memory of Trees'. For some reason, I hadn't listened to 'And winter Came' more than a few times, and even then, only a couple of tracks. It is only as the new album has started to be promoted I revisited this album and realised what I'd been missing. Yet another Enya masterpiece! My favourite tracks are "White is in the Winter Night' and 'One Toy Soldier'. But as I've started to listen to the whole of it again, all the songs have grown on me more and more. I just can't get over the consistently high quality and craft of these recordings. No wonder each album takes three years to make!

I suppose, in a way, I've got two new Enya albums to enjoy, since I overlooked this one for so long, and have 'Dark Sky Island' to look forward to any day now. So I would say to anyone about to buy their first Enya album, check out all the others too, they're well worth it, including, most definitely 'And Winter Came.'
続きを読む
1人のお客様がこれが役に立ったと考えています
違反を報告
レビュー を日本語に翻訳する
すべてのレビューを参照します
Amazonプライム会員ならお急ぎ便、日時指定便が使い放題
さらに、映画もTV番組も見放題。200万曲が聴き放題 。クラウドに好きなだけ写真も保存可能。
> プライムを無料で試す