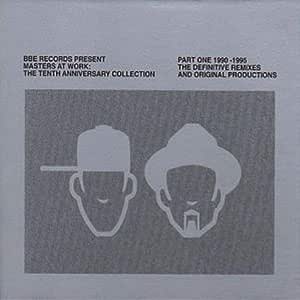 Since 1990, the dance scene has splintered into further factions and sub-genres, creating a ground swell of thrilling, remarkable, fantastically alien and upside your head "music". Little "Louis Vega" and Kenny "Dope" Gonzalez, the New York DJs behind the Masters At Work (MAW) brand celebrated their tenth anniversary in 2000 as the true mavericks of dance music, the precursors to Basement Jaxx's punk-garage. Part One of their 10th-anniversary collection takes its cue from 1990 to 1996, the years when they created their most exceptional material. Always faithful to R&B/disco's inherent sense of soul and rhythm, the duo found ways of adding Latin, jazz, hip-hop to the thumping BPMs of the dance floor. Across a beautifully packaged boxset (four CDs), MAW take us on a ride to the wild Nuyorican side. Thematic rather than chronological, MAW CD 1 concentrates on 1994, the "vocal years". While Hard House was all the rage, Vega and Gonzalez kept New York's vocal tradition alive with classic anthems such as River Ocean featuring India's "Love & Happiness", Barbara Tucker's "Beautiful People" and Voices' "Voices In My Mind. CD 2 represents the duo's ability to remix bland, pop songs like Simply Red's "Thrill Me" and Lisa Stansfield's "Set Your Lovin' Free" into clubland wonders. However it's CDs 3 and 4 where MAW truly come into their own. CD 3 begins with the instrumental that cemented their "genius" reputation. Recorded in 1993, "The Nervous Track" was a wonderful fusion of jazz, Latin, breakbeat and House, showcasing New York's rich and diverse musical heritage. Thereafter, both CDs blueprint the duo's refusal to be genre-conscious. From the reggae-hip-hop of "Blood Vibes" to Gonzalez (as The Bucketheads)'s Top-10 hit, "The Bomb" and on to the live jazz-house of "Our Mute Horn", Masters At Work prove to be the true dons of hypnotic dubs, emotive vocal cuts, acoustic Latin grooves and disco-charged floor fillers. --Na'solo So Fahed

J. Russell
5つ星のうち4.0 beware tracklisting
2007年9月23日に英国でレビュー済み
Amazonで購入
although this is a great cd, the tracklisting is incorrect. according to the one on amazon, one of the tracks melissa morgan (still in love) should be on it. however, it is not, along with a couple of others.to add to the confusion the tracklisting on the back cover is also erroneous, however, an insert has been added which is correct!

this is particularly annoying since this is the second MAW cd i have bought and twice melissa morgan although listed has not appeared!

the record label really should do more to make sure that the listings are authentic as it becomes rather irritating.