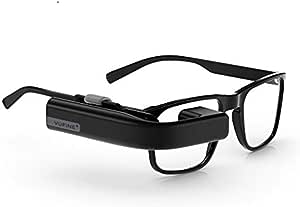 The way it connects to the glasses broke after a few minutes of use, as the thin rubber simply snapped under normal use, as designed.
The arm, which moves, is good for its flexibility, but there is no way to tighten it into position, so any minor brush with anything and it moves or falls off.
Basically, the mount breaks and is no good.
The optics quality is only just good enough. The very edges of the screen show some chromatic aberration.

The screen is actually *okay* for my use, and probably for most purposes. I just wanted it for showing message notifications (email/Discord), for editing text in VI/VIM (80x24 which is okay if made full screen, and font size increased accordingly), and for watching videos - all for use as a second monitor (in the background).

Like me, you will likely need to create your own mount...which I'm planning on doing, rather than sending it back. I'm prepared to do this because it's still far cheaper than buying a truly professional system, and the screen is *just* good enough for my use-cases.
If I can't work out how to make a decent mount, then I will send it back, but it will be a shame.
続きを読む
違反を報告
レビュー を日本語に翻訳する

Tracey Williams
5つ星のうち1.0 Expensive for what it is!
2019年5月17日に英国でレビュー済み
Amazonで購入
Over priced! I could not get this to work with any od my tablets. Despite wasting money on two adapters. I have a Samsung 9 note and the screen was smaller than the tiny screen these output. I tried adjustments with display and the result was terrible. Have returned. It does not work with Kindle Fire 10 or generic tablets. If it was blue tooth and a bigger screen, it would be worth the money, in its present specification it is a dud!
続きを読む
1人のお客様がこれが役に立ったと考えています
違反を報告
レビュー を日本語に翻訳する

I'd read the bad reviews but thought I'd give this a shot. The unit itself is well made, and the display is small, but reasonably sharp. However, the package is totally ruined by the embarassingly poor quality mounts.

It's somewhat ironic, because that's the "easy" part in designing a product like this. It seems as though it may have been outsourced, or an afterthought; the primary mount broke after approximately one hour (rubber strap snapped), but was only marginally usable anyway. The more complex mount simply doesn't work. It uses a ball/socket for adjustment that has no rubber, so it won't stay where you put, even briefly. It should never have made it to a customer.

I've ordered the headband, and will give it a shot, but I honestly don't have high hopes. If it's not perfect, I'm sending the whole lot back.

If the company that makes this product is still in business, they *need* to design a proper mount, and ship it out to customers for free. Without it, these HMDs are not functional devices. With a proper, stable mount, it would be a 4 or possibly 5 star device.

Will update after I've tested the headband mount.

Received the headband mount, which was not as pictured. It's just the hat mount, along with a cheap headband, and doesn't work very well. Combined with the insufficient eye relief on this HMD, it is simply unusable. Back it goes.
続きを読む
14人のお客様がこれが役に立ったと考えています
違反を報告
レビュー を日本語に翻訳する

Rangerx52
5つ星のうち5.0 Good product, great value
2019年12月5日にカナダでレビュー済み
Amazonで購入
The mount sucks, and jiggles around too easy. The cables can be cumbersome, the button on the end is not intuitive, it won't remember settings, and even when positioned properly, theres corners of the screen you wont be able to focus on. However, the screen is very nice, its bright, its crisp, the unit itself is light and small, and very inexpensive for what it is. For the money you save on buying this unit over a more expensive one, you can 3d print a proper mount, and pick up some slim cables, and you've got a great setup. Theres better out there, but not for this price.
続きを読む
2人のお客様がこれが役に立ったと考えています
違反を報告
レビュー を日本語に翻訳する