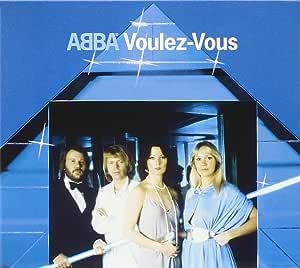 Voulez-Vous is ABBA's Eurodisco album and if you decide to go there be ready for some serious histrionics. Typical of record's wall-of-sound is "Does Your Mother Know", on which the disco pulse leads into power guitar riffs laid out over a boogie piano. The sound is equally mammoth on the title track (which had been partially recorded in Miami with disco group Foxy, "Summer Night City" and "If It Wasn't for the Night". Released in 1979, the album showcases the band at its most jet-setting, top-of-the-world glamorous. This CD's bonus tracks include the infamously campy "Gimme! Gimme! Gimme! (A Man After Midnight)" and "Lovelight", the latter being the B-side to the "Chiquitita" single. --Elisabeth Vincentelli

Another chart-topper, from 1979! Includes Does Your Mother Know; Angeleyes; Chiquita , and more.

Liz P
5つ星のうち5.0 New for old
2018年6月15日に英国でレビュー済み
Amazonで購入
Last year I passed on all my old vinyl records (which weren't loads) and a bunch of ABBA was among them. Had a yearning after to rehear some old sounds... Love this... takes me back to my teens.
It is difficult rating things sometimes. New stuff... a t-shirt, a dress… you don't entirely know hat to expect when you order... and you review it before worn or indeed washed (made a fab review on one thing, that after washing [on cool, I may add] was a faded mess after!) but hearing a good, clean version of an old tune(s) …
I knew what I expected and I got it! Hoorah

S. V. Kerry
5つ星のうち5.0 Best of The Deluxe ABBA Albums?
2012年6月23日に英国でレビュー済み
Amazonで購入
Voulez-Vous has to be the perfect summer ABBA album and its a full on disco vibe all the way through. It only pauses for breathe with the two major ballads "Chiquitita" and "I Have A Dream" where both Agnetha and Frida shine respectively on their leadvocal. As well as those two mega hits. "Does Your Mother Know" , Bjorns only relevant outing as ABBA's lead vocalist, provided a third single. In the UK we were treated to "Angeleyes" as an A-side, where as in most territories the other record companies responsible for ABBA's 45's went with the album title track "Voulez~Vous". Here in its deluxe form these five tracks are now complimented with the inclusion of "Summer Night City" a top ten hit from 1978 (included here with its full length intro) as well as 1979's "Gimme! Gimme! Gimme! (A Man After Midnight), a number 3 hit in the UK. Of the remaining audio tracks, there really isn't a duff one here. "If It Wasn't For The Nights" , originally chosen as the lead single and, performed on numerous TV shows before being dumped when Benny & Bjorn came up with Chiquitita, is an outstanding ABBA song which would easily have been a huge hit. "As Good As New" is just one of those delicious ABBA pop songs with its fake string quartet intro lulling you into a false sense of security before its kick-ass disco beat bounds into view, and it was a hit single in Mexico! "The King Has Lost His Crown" begins with a majestic intro before Frida's sultry tones carry it through harmonic verses into a rocky chorus and "Kisses Of Fire", with its dreamy Agnetha voiced intro just knocks your sox off when it hits full tempo and an uncountable amount of joyous harmonies wrap around each other as it reaches its crecendo. "Lovers (Live A Little Longer)" is perhaps proclaimed to be the weakest track on the original album. I disagree, its different. Its probably the sexiest song ABBA ever recorded. Of the remaining bonus tracks "Lovelight", originally only released as the B-side to "Chiquitita" is a great slab of solid pop while "Dreamworld" (released for the first time here with its full intro) is unique with its circus-esque intro music and a fun arrangement. This album is one of the groups strongest with extremely high standards maintained throughout the recording. The inclusion of "ABBA - In Switzerland" (albeit an edited version of the original BBC show) is fabulous, especially as it includes the original rocky version of "Does Your Mother Know". All in all I think this is a great collection, and one of the best in the deluxe series.
続きを読む
5人のお客様がこれが役に立ったと考えています
違反を報告
レビュー を日本語に翻訳する

MOGSSONSHUSSIF
5つ星のうち5.0 NEVER GETS OLD
2019年4月13日に英国でレビュー済み
Amazonで購入
Sounds fab, singing my socks off. CD sleeve notes make for essential reading and contain stunning photos that say so much - there is one of just the two women together, hair blowing in the wind and they look SO beautiful.
続きを読む
1人のお客様がこれが役に立ったと考えています
違反を報告
レビュー を日本語に翻訳する

Charlotte Sometimes
5つ星のうち5.0 FABBA!
2014年8月17日に英国でレビュー済み
Amazonで購入
OMG this is a good album. Even the songs I hate to admit to liking ('Chiquitita', 'Does your mother know?') are irresistible and this version of the original album is all the better for having the somewhat overlooked but brilliant 'Summer Night City' added on as an extra track. Usually, I hate extra tracks as I'm a bit of an album purist ('geek') but I was very happy to find this little gem added on for free. Honestly, Abba were amazing - can you imagine how excited Simon Cowell would have been if songwriters/singers as talented as this rocked up on 'The X Factor'? Absolute genius!
続きを読む
1人のお客様がこれが役に立ったと考えています
違反を報告
レビュー を日本語に翻訳する

Tamthebam
5つ星のうち5.0 A great "Disco" album
2015年8月30日に英国でレビュー済み
Amazonで購入
A great "Disco" album. Out of the 10 tracks half were released as singles all of which hit the Top 5 in the U.K.[Chiquitita, I Have A Dream, Does Your Mother... and the double A Side Voulez Vous /Angel Eyes ] Of the 5 remaining tracks As Good as New & If It Wasn't For The Nights could easily have been hit singles. The other 3 songs are not bad either although they are not as good as the 7 above. Overall out of the 8 studio albums Abba released this I.M.O. is 4th behind Arrival, The Visitors and Abba '75.
続きを読む
違反を報告
レビュー を日本語に翻訳する
すべてのレビューを参照します
Amazonプライム会員ならお急ぎ便、日時指定便が使い放題
さらに、映画もTV番組も見放題。200万曲が聴き放題 。クラウドに好きなだけ写真も保存可能。
> プライムを無料で試す