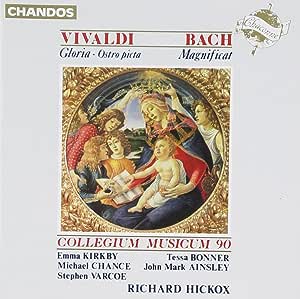 If you like your Vivaldi a little less frenetic than

Jeremy
5つ星のうち4.0 Good chorus, excellent soloists
2002年1月23日にアメリカ合衆国でレビュー済み
Amazonで購入
The only way I know how to describe this recording is "quite good." Nothing was done wrong and the enunciation and tone was general good to excellent (although not exceptional, which is what you desire from professionals). The strong point was definitely the soloists which if the cd had only been them I might have given it 5 stars.
Which is to say that this recording did have some great moments. There were a few songs which reminded me that the money I paid had been worth it. 1. Aria: Ostro Picta, Armata Spina - sung by the soprano Emma Kirkby was exceptional. as was her duet with Tessa Bonner in Gloria RV 589: 3. Duetto: Laudamus Te, which was done at a wonderfully brisk and bright pace and much emotion without too much virbrata.
I had originally wanted the cd because it was a relatively early recording for Michael Chance (former choral scholar countertenor at King's College) and John Mark Ainsley. Both were close to flawless and Bach's et misericordia (duet) was where they shined in this cd.
The Vivaldi choruses were unexciting for me (someone who has heard many recordings of them) as they were not of spectacular quality (although not bad by any means). They seemed to excite my fiancee, though, as this cd was the first she'd ever heard the glorias. Check out Philip Ledger's King's College recording of RV 589 if you desire to hear clear intonations and bright sound from the choruses. This cd, though, is one I listen to often because of the wonderful soloists and musicians and my four star rating means I would recommend it.

B. R. Merrick
5つ星のうち5.0 Fine Clarity and Precision
2008年9月28日にアメリカ合衆国でレビュー済み
Amazonで購入
There is a presence and vitality that exists throughout both Baroque masterpieces showcased here. Separating the "Ostro picta" from the rest of the Gloria was a good decision, so that those who would rather dispense with the "introduction" to the Gloria may do so. (They may or may not have been written to be performed together. On the Virtuosi Saxionae recording, they are performed continuously.)

Emma Kirkby as the soprano soloist does indeed deserve to be singled out as exceptional. Her solos soar over the top of a finely tuned and well-prepared ensemble. The chorus and other vocal solosists are also wonderful. Hickox takes a few dares with the tempos, all to marvelous effect, leading the listener to believe that these may very well be the tempos that Vivaldi and Bach had in mind. Even if they didn't, on this CD you will hear exactly why this music is so beautiful.
続きを読む
1人のお客様がこれが役に立ったと考えています
違反を報告
レビュー を日本語に翻訳する

AK
5つ星のうち3.0 Very professional, but overly dry sound overall, a bit rushed, and in the "mente cordis" brass drowns out the voices.
2013年1月5日にアメリカ合衆国でレビュー済み
Amazonで購入
No fault of the conductor or performers (perhaps the sound engineering could have modulated things a mite). If you like this style of interpretation, it's perfect, but if you prefer tp savor the choral nuances and the interplay between vocal and instrumental contributions, you may enjoy another rendition much more.
続きを読む
違反を報告
レビュー を日本語に翻訳する
すべてのレビューを参照します
Amazonプライム会員ならお急ぎ便、日時指定便が使い放題
さらに、映画もTV番組も見放題。200万曲が聴き放題 。クラウドに好きなだけ写真も保存可能。
> プライムを無料で試す