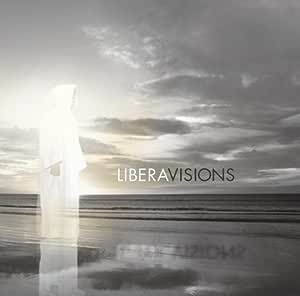 Libera is the extraordinary vocal group made up of no less than 24 boys aged 7-16 who meet for several hours every week at a church in South London to rehearse and perform. Visions, amply demonstrates their musical prowess; with shimmering, mystical chords and exquisite harmonies, Libera prove they really are unique. Of the13 tracks on the album, some will sound familiar such as 'Locus Iste', which is based on Johann Pachelbel's (1653-1706) famous piece, 'Canon', a piece of baroque music that has been interpreted by many over the years, even finding its way into modern pop music. There's an entirely original arrangement of 'Ave Maria' and an uplifting version of the traditional hymn, 'Abide With Me' (words: Henry Lyte, 1847. Music: William Monk, 1861). The remaining tracks are entirely original with titles like 'New Day', 'Sing Forever' and 'Something Sings'. Several new soloists are featured: Michael Horncastle, Connor O'Connell, Tom Cully, Joseph Sanders-Wilde, Callum Payne, and James Verecken. Libera's previous album Free spent several weeks in the top 3 position in the UK Classical Charts. The album was also nominated for 2005's Classical Brits Awards "Album of the Year". EMI. 2005.

Ms. Bridget M. O'cleary
5つ星のうち4.0 Libera
2010年3月7日に英国でレビュー済み
Amazonで購入
I have listened to this CD so many times that it will soon be wearing out !! It sounds like angels singing and the real world is left behind. I have bought the others as I was so impressed with this album.
続きを読む
役に立った
フィードバックを送信中...
フィードバックをお寄せいただきありがとうございます。
申し訳ありませんが、お客様の投票の記録に失敗しました。もう一度試してください。
違反を報告
レビュー を日本語に翻訳する

Jeff Carter
5つ星のうち5.0 Another Superb Album!
2005年11月7日に英国でレビュー済み
Amazonで購入
When I heard that Libera had another album due for release only twelve months after their last one, I wondered if the standard of 'Free' could be repeated with 'Visions'. I need not have worried. The quality is every bit as good and in some cases improved upon. Changes in personnel (necessitated by biological progression!) do not trouble Libera as they seem to have an endless supply of top quality soloists apparent in many of these tracks. If, like me, you have all of their recordings dating back to their 'Angel Voices' albums, you may notice that some of the tracks on 'Visions' are already on some of their earlier offerings. Don't let this put you off. They are completely different arrangements and sound as fresh as the originals. To sum up, Libera have again achieved the impossible: they have not only maintained the quality of their earlier recordings but they have surpassed it! Another superb must-buy album!
続きを読む
34人のお客様がこれが役に立ったと考えています
役に立った
フィードバックを送信中...
フィードバックをお寄せいただきありがとうございます。
申し訳ありませんが、お客様の投票の記録に失敗しました。もう一度試してください。
違反を報告
レビュー を日本語に翻訳する