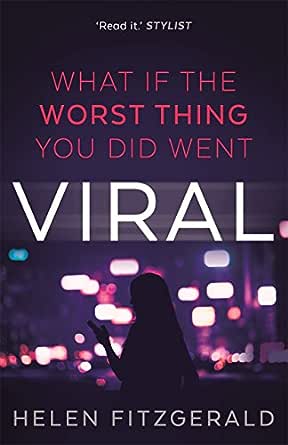 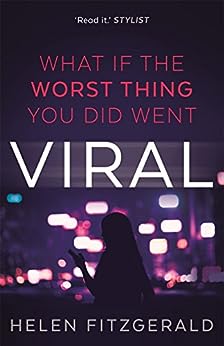 Helen FitzGerald is the bestselling author of Dead Lovely (2007) and nine other adult and young adult thrillers, including My Last Confession (2009), The Donor (2011), The Cry (2013), which was longlisted for the Theakstons Old Peculier Crime Novel of the Year and the Guardian's Not the Booker Prize, and The Exit (2015). Helen has worked as a criminal justice social worker for over ten years. She is one of thirteen children and grew up in Victoria, Australia. She now lives in Glasgow with her husband and two children. --このテキストは、paperback版に関連付けられています。

leekmuncher
5つ星のうち5.0 Light and shade
2016年7月16日に英国でレビュー済み
Amazonで購入
In a similar way to Louise O’Neill’s use of a real incident as a basis for her fiction, Fitzgerald uses an infamous viral video as the trigger for this unsettling story. From the first line – I sucked twelve cocks in Magaluf – the reader is drawn into an experience much like a nightmare: how did I get here and what happens next?
Su wants to be a doctor. She’s a virgin and a good girl. She wants to make her adoptive parents proud. Her sister, a natural conception shortly after the adoption, dismisses the ambition of good girl and chases good times instead.
When the two travel to Magaluf with a bunch of friends to celebrate their exams, only one will return home.
Su’s drunken (drugged?) escapade is filmed by the club staff and put online to go viral. She can’t bear to go home and face her family, friends, boyfriend, neighbours, knowing they’ve all seen it. So she runs.
Her mother, Ruth, is a judge (or Sheriff as it’s known in Scotland). Enraged at the judgement of her daughter and the lack of any shame attached to the men or those filming, she goes after them. This is not just for Su, but for herself.
All the three women are significantly changed by their efforts to manage the impact, and the ending is unexpected yet satisfying.
Fitzgerald’s black humour and skill with changing pace makes this a speedy read while luring the reader into genuine emotional investment. Not to mention striking a terrifying note about social media.

You’ll enjoy this if you like: Jodi Picoult, Louise O’Neill, Fay Weldon

Avoid if you don’t like: What really goes on in Magaluf, exploitation of young women and emotional stress

nickyb
5つ星のうち3.0 Vacuous Viral
2016年10月11日に英国でレビュー済み
Amazonで購入
I agree with the reviewers who say this book starts out OK but fails to live up to its early promise.Another reviewer says Viral becomes implausible. Absolutely right. In fact it turns into what we've come to expect from a lot of self published 99p books on Amazon - close to rubbish. I state that the book's OK because there's a lot of interesting arguments and thoughts about the Internet in this novel. It's just that the characters lose their way.They become unbelievable especially the mother. You ask yourself why would the author lose control of these people who she has obviously spent time creating. Baffling. Not too sure if I'd recommend you to waste a day or two reading it but maybe.
続きを読む
3人のお客様がこれが役に立ったと考えています
違反を報告
レビュー を日本語に翻訳する

ScottishShanny
5つ星のうち3.0 Average
2016年7月20日に英国でレビュー済み
Amazonで購入
Nearly every one of us on here will have a social media account, we have all at some point received or sent “The Video” of that time. Videos going viral is a quick bit of fame for some people. But, it’ not always a good fame. We don’t know what harm can be done when we are sharing a seemingly innocent video all around the world. When the person in it may not have a clue that they are even in it.

Viral sparked my interest, living in such a digital age. I’m not a huge social media user, I can’t work twitter to save my life. I’m limited to facebook, good reads I suppose and kik messenger.
I bought the book on the kindle store when it was at 99P. So I can’t grudge at what I paid for it.
The story starts off with a bang, putting it all out there right away. I was hooked, why did she do it? Was she forced? Was it voluntary? I had to know more.
I adored the start of the book, it kept me hooked kept me wanting more and also made me think about some situations I know people have gotten into.
It’s a cautionary tale, begging people to think about what they do, what the consequences could be and that someone could be watching and recording at a moment we slip up and it could end up all over the world with more people than we could imagine watching.
Then……the realism ended for me, I was hoping that it would show more of the struggle she went through. But these characters all had this unlimited luxury of money and power to get through. So, personally not knowing anyone who could send one kid round the world in search of the other, while the other is pulled £300 out of the bank every couple of days and has the money to keep herself away from her now changed reality. I felt like I couldn’t connect to it. I wanted to know how it would have changed her everyday life.

The story had highs and lows, although I enjoyed the writing style it was just too unrealistic for me to fully appreciate the severity of the situation.
I can’t grumble at the book since it was as cheap. But it’s not one I would revisit or highly praise. It was to me just an average book where the story won’t stick with me.
続きを読む
2人のお客様がこれが役に立ったと考えています
違反を報告
レビュー を日本語に翻訳する

BTPBookClub
5つ星のうち5.0 I enjoyed this one.
2017年4月17日に英国でレビュー済み
Amazonで購入
Now I must state this book has received a lot of mixed reviews but, this is my personal review and I loved it! This book needs an award for best opening sentence! It was blunt, straight to the point and had you intrigued. Another point is that stuff like this does happen in the real world and it does ruin lives whether abroad or at home. This is the first book I have read by Helen and it will not be my last. I would have to warn you that it does included a lot of drugs, sex and swearing! But I enjoyed it. Viral is written well, easy to read and I would consider it a short story (253 pages). It may not be to everyone's taste but I awarded five stars.
続きを読む
4人のお客様がこれが役に立ったと考えています
違反を報告
レビュー を日本語に翻訳する

Susan Wallace
5つ星のうち5.0 Fantastic read.
2017年11月5日に英国でレビュー済み
Amazonで購入
Viral by helen Fitzgerald.
When Leah Oliphant-Brotheridge and her adopted sister Su go on holiday together to Magaluf to celebrate their A-levels, only Leah returns home. Her successful, swotty sister remains abroad, humiliated and afraid: there is an online video of her, drunkenly performing a sex act in a nightclub. And everyone has seen it.
Ruth Oliphant-Brotheridge, mother of the girls, successful court judge, is furious. How could this have happened? How can she bring justice to these men who took advantage of her dutiful, virginal daughter? What role has Leah played in all this? And can Ruth find Su and bring her back home when Su doesn't want to be found?
Fantastic read. Loved characters. The story was shocking. Couldn't put it down. A thrilling and shocking read. 5*. Netgalley and faber and faber.
続きを読む
1人のお客様がこれが役に立ったと考えています
違反を報告
レビュー を日本語に翻訳する
すべてのレビューを参照します
click to open popover
Amazonプライム会員ならお急ぎ便、日時指定便が使い放題
さらに、映画もTV番組も見放題。200万曲が聴き放題 。クラウドに好きなだけ写真も保存可能。
> プライムを無料で試す