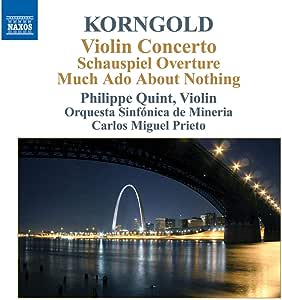 Much admired today as a pioneer of film music, Erich Korngold was a precociously talented composer of concert and chamber music, opera and stage works, as his Schauspiel Overture, written when he was only fourteen, shows. The phenomenal success o

Simon B
5つ星のうち5.0 A Wonderful CD!!
2009年7月11日に英国でレビュー済み
Amazonで購入
The Mineria Symphony Orchestra would appear to be a unique organisation- a professional orchestra based at the Music Academy of the Mining Palace, founded by engineers from the National and Autonomous University of Mexico's Engineering Faculty.

At first I wondered if this was some kind of spectacular mistranslation in the sleeve notes, so bizarre seems their inception, but on the strength of this recording the Mexico City based orchestra would indeed seem to be musicians of the highest calibre: Their concert hall would also appear to have an excellent acoustic.

I have to admit to being bowled over by this disc: the recording is well-nigh perfect, and the standard of playing from this (to me) unknown ensemble is distinguished, with characterful work from all sections. What is most impressive is that they have caught Korngold's idiom so wonderfully. So many orchestras either play this music in a blousy `over the top' fashion, whilst others, afraid of the romanticism perhaps, underplay, as if it needs to be treated with kid gloves. On this CD the orchestra approach the music with appropriate `schwung', and are full-throated without being `kitsch'.

Carlos Miguel Prieto clearly has the measure of this repertoire: I have numerous recordings of the Korngold Violin Concerto from Heifetz onwards, but this is a serious contender for my top spot. Philippe Quint's gorgeous rounded tone works to his advantage in this piece, and Prieto ensures that the big tunes- culled from Korngold's film music (as with his Symphony, you can't - and shouldn't-keep a good tune down)- are presented to full effect.

Incidentally, if anybody still has the idea that the concerto is little more than a potpourri of movie themes they should listen to this recording and dispel the myth at once: ever the craftsman and showman, Korngold's film music was as symphonically integrated as everything else he wrote. This is a convincing and ambitious piece wonderfully interpreted.

The remaining items on the disc are similarly a delight. The Schauspiel Overture (Overture to a Comedy) was the first work Korngold orchestrated on his own. Written when he was 14, it already shows him as a developed and mature composer, with a distinctive style, long before the Hollywood years which have defined his subsequent reputation. Korngold's palette is rich and full-toned: and what a satisfying piece it is!

The programme is rounded off with the suite from `Much Ado About Nothing', more familiar to a wider audience in its arrangement Violin and Piano. The suite uses a smaller orchestra with prominent parts for piano and harmonium.

Prieto judges the piece to perfection, as, deceptively, there are some tricky changes in tempo and timbre: This definitely jumps to my top spot as the benchmark interpretation. If I have one minor gripe, it is that the piano seems slightly out of tune in the intermezzo, which may be to do with a disparity between the piano and harmonium, the latter a pretty unreliable instrument at the best of times: I can forgive that when there is so much character and good humour.

Overall this CD has my heartiest recommendation.

Boydster
5つ星のうち5.0 and first prize - the Mexican Mining Institute Orchestra
2012年5月30日に英国でレビュー済み
Amazonで購入
Fabulous piece of music - great soloist and orchestra (would you have believed it if the BBC hadn't told you?) - and - not a load of messing around in production - bought after hearing it on BBC Radio 3 - really sorry I didn't have it in my collection - worth every penny - and it wasn't even a lot of those
続きを読む
1人のお客様がこれが役に立ったと考えています
役に立った
フィードバックを送信中...
フィードバックをお寄せいただきありがとうございます。
申し訳ありませんが、お客様の投票の記録に失敗しました。もう一度試してください。
違反を報告
レビュー を日本語に翻訳する

CP Williams
5つ星のうち3.0 Sleeping Giant
2014年2月19日に英国でレビュー済み
Amazonで購入
This was the first Korngold CD I had bought, having heard some stirring film music from him. The violin concerto wasn't up to the same level of the film scores, but was an impressive piece of work nonetheless.
続きを読む
役に立った
フィードバックを送信中...
フィードバックをお寄せいただきありがとうございます。
申し訳ありませんが、お客様の投票の記録に失敗しました。もう一度試してください。
違反を報告
レビュー を日本語に翻訳する