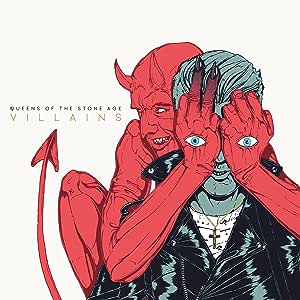 Amazon Customer
5つ星のうち5.0 When you find the time, and the place...
2017年8月30日に英国でレビュー済み
Amazonで購入
Perhaps two or three days ago, I would have given this album less than the full score. I still hadn't made up my mind on a couple of the tracks, and like Like Clockwork before it, the album lacks a truly heavy number to break up the melodies a bit.

That all changed once I stopped trying to enjoy it, and found myself walking home alone after a rough nightshift at the bar I work at. With daylight threatening to break at any moment, I found myself humming along, familiar enough with the tunes by then. Like Clockwork is an album to brood in the dark to, but Villains very much feels like an album to listen to when you're feeling a bit displaced from the world around you.

Maybe it's hard to explain, but I do think comparing this to their previous works is meaningless. Those other albums are time capsules for QOTSA as they were, and I know any potential future albums will differ vastly from this one. I just hope I 'get' them like I did Villains.
続きを読む
27人のお客様がこれが役に立ったと考えています
違反を報告
レビュー を日本語に翻訳する

Brian G
5つ星のうち5.0 A real belter
2019年9月7日に英国でレビュー済み
Amazonで購入
When I first came across these geezers it was by a complete fluke. I was searching for some unpretentious full on rock music. My curiosity into a programme on Sky Arts was titled, I think it was called, From the Artists Studio, if I got the name of the programme wrong,please accept my apologies. It described that the artist would be in a stripped back studio. This ment it was the band members in a what I can only describe as a shoebox studio. No fancy settings or any crap like that, just the band or solo artist in the studio.
I have been a long time fan of The Old Grey Whistle Test back in the day. So the Sky programme fired my curiosity. The first band I watched was QOTSA. Boy was I blown away. This particular release may not be to every fans liking, but they have not lost any of their power. They have added a band member since Like Clockwork plus there is use of synths, which again some fans may not be happy with. All I would say to all fans, give this CD a listen and you will not be disappointed.
続きを読む
2人のお客様がこれが役に立ったと考えています
違反を報告
レビュー を日本語に翻訳する

DorsetBlue
5つ星のうち4.0 A worthy addition to your QotS collection
2018年1月10日に英国でレビュー済み
Amazonで購入
I like Queens of the Stone Age - however sometimes their albums take a few listens before you can understand what Josh and co were trying to achieve and then they click. Like Clockwork was definitely like that; saw them live on Jools Holland- quite liked what they played, bought the album - wasn't sure, played the album a few times - ahh there it is.
So this album, well it is not quite like 'Like Clockwork'. The first track 'Feet don't fail me now', after a short-ish intro, gets going with typical QotS riffage - possibly with a slightly more synth vibe (we will get back to this shortly). You are then reasonably up to speed and you can enjoy the album after a play or two.
Mr Ronson's production adds a new element to the sound, especially the aforementioned Synths. This is a band that likes to experiment and I must admit, Ronson definitely brings something to this album. Not sure I would like him to do the next album though.
Personally, this album is not another 'Songs for the Deaf'. That album is a classic and is rather difficult to beat. But this album is very good addition to the QotS collection.
続きを読む
2人のお客様がこれが役に立ったと考えています
違反を報告
レビュー を日本語に翻訳する

Trev
5つ星のうち5.0 Back but forward!
2017年12月5日に英国でレビュー済み
Amazonで購入
I've always enjoyed what the band do but my favourite albums are 'Songs for the deaf' and 'Lullabies to paralise. This sounds to me like the one that should have followed Lullabies, so it seems a step back and then a step forward? There's not a duff track on it and some real memorable moments which get in your head and won't leave you alone. Saw them play live at the 02 and the new tracks fitted in great.
続きを読む
3人のお客様がこれが役に立ったと考えています
違反を報告
レビュー を日本語に翻訳する

Mr. I. D.
5つ星のうち4.0 QOTSA & Answers!
2017年9月24日に英国でレビュー済み
Amazonで購入
This review may well turn into a 5 in a few weeks, especially after hearing live tracks at Wembley. Not as immediate as Songs For The Deaf but there are some great hooks to appease fans & bring in the new ones. I bought the fabulously packaged LP, 3 sides of magic, with a gloriously etched 4th & art cards with lyrics. Yes, you do also get the digital download! (Can anyone advise whether the additional code download is better than the auto-Amazon one though?).
続きを読む
違反を報告
レビュー を日本語に翻訳する
すべてのレビューを参照します
Amazonプライム会員ならお急ぎ便、日時指定便が使い放題
さらに、映画もTV番組も見放題。200万曲が聴き放題 。クラウドに好きなだけ写真も保存可能。
> プライムを無料で試す