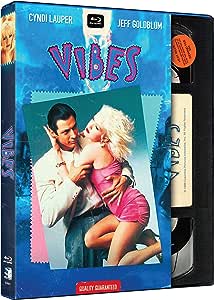 Kevin Dudley
5つ星のうち3.0 Mill Creek brings 1988's "Vibes" to blu-ray. (3 stars for the disc, 1 for the movie)
2020年2月13日 - (Amazon.com)
Amazonで購入
"Vibes" is a terrible 1988 romantic adventure comedy starring Cyndi Lauper, Jeff Goldblum, Peter Falk, and Julian Sands. Released to scathing reviews and abysmal box office, it is even hard to watch from a so bad its good vantage point. The plot is a bizarre mish mash of ideas that never work together, the direction is pedestrian at best, and the plot complete nonsense. This film is only recommended to hardcore fans of the actors involved.

Mill Creek Entertainment brings "Vibes" to blu-ray in a budget priced bare bones release. The film is presented in its original 1.85:1 aspect ratio utilizing the AVC codec at a modest bit rate. This is obviously a dated HD scan as the picture quality is decent at best. Detail, colors and contrast levels never pop like they should and edge enhancement is visible throughout. I do not have a DVD release to compare, but overall the movie looks fine all things considered.

Sound is presented in 2 channel master audio. English subtitles are included for the hearing impaired.

There are absolutely no extras on this disc, not even a trailer.

"Vibes" is a very bad movie that is tough to try to sit through. Should anyone want to own it on blu-ray, Mill Creek presents the film in solid fashion and a cheap price tag too.

William Harold Tanner
5つ星のうち3.0 Fun Movie, but Packaging is Not Retro
2020年2月15日 - (Amazon.com)
Amazonで購入
This is a typical 80s movie, containing comedy, mystery, adventure, travel, romance. It's not a classic, and for that I'll subtract a star, but it's not a bad movie. It's actually pretty good. It was written by the great comedy writers Lowell Ganz and Babaloo Mandel. Ron Howard was an executive producer. Cyndi Lauper and Jeff Goldblum make a cute team. I hadn't seen this in years, and i think it holds up well.
The Blu-ray transfer is fine for an 80s film, sharp and colorful.
But- I'm subtracting another star for packaging. Amazon presents this item like it's in a retro VHS box with the Blu-ray hidden inside. I bought a copy of Jaws last year that was packaged like that and it was cool. But this reissue of Vibes is an optical illusion- it's simply a cardboard slip case over a standard Blu-ray case. It's flat and slim, not a VHS box.
Anyway, this is a fun 80s movie with lots of cameos from popular actors of the time. It's worth a second look.
続きを読む
1人のお客様がこれが役に立ったと考えています
レビュー を日本語に翻訳する

Man of Vision
5つ星のうち5.0 Nostalgically Funny
2020年2月13日 - (Amazon.com)
Amazonで購入
Thos is one of my favorite 80's movies without being too cliche and campy. It blends a supernatural theme with comedy without being corny. This is super rare to find this on bluray which quickly sold out. Awesome that I got this when it was available.
続きを読む
2人のお客様がこれが役に立ったと考えています
レビュー を日本語に翻訳する

infinte_variety
5つ星のうち5.0 I love this movie
2020年2月11日 - (Amazon.com)
I love this movie and it is in my top 10.
the humour is subtle, the characterizations spot on and the writing brisk.
Cindy Lauper's first movie and one of Jeff Goldblum's early work, they are wonderful and silly.
続きを読む
3人のお客様がこれが役に立ったと考えています
レビュー を日本語に翻訳する
Amazon.comのカスタマーレビューを見る(7) 5つ星のうち4.1
Amazonプライム会員ならお急ぎ便、日時指定便が使い放題
さらに、映画もTV番組も見放題。200万曲が聴き放題 。クラウドに好きなだけ写真も保存可能。
> プライムを無料で試す