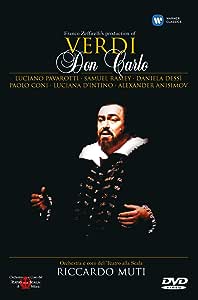 This is a highly professional, sometimes outstanding production of one of Verdi's greatest operas. With lavish staging by Franco Zeffirelli and distinguished performances by Luciano Pavarotti (Don Carlo) and Samuel Ramey (King Philip), as well as the La Scala Orchestra and Chorus, under Riccardo Muti, it can be recommended as the best available DVD edition of the four-act version that Verdi prepared in response to complaints about the production expense and the length (nearly four hours) of his five-act original.

The hard choice for a prospective owner is between the four-act and the five-act versions. Riccardo Muti, like most conductors today, omits the first act, set in the forest of Fontainebleau, in which Don Carlo meets and falls in love with the French Princess Elisabeth, who was his fianc馥 but instead, tragically, becomes his stepmother. This is a serious omission of thematically powerful material, and James Levine and the Metropolitan Opera include it, beautifully produced, in their all-star video with Placido Domingo in the title role. --Joe McLellan

Michelone
5つ星のうち5.0 Great Verdi in Capable Hands
2016年8月22日 - (Amazon.com)
形式: DVDAmazonで購入
This is the best conducted Don Carlo but leaves out the Prologue...a sin really. Muti especially excells in the last act duet...some of the most beautiful music ever written. Pavarotti is well-costumed and even looks handsome. Dessi is a wonder; D'intino perfect. There are only a few mezzos ever who can really sing this daunting role. If anything, Ramey looks too young to be Pavarotti's father but he is magnificent throughout. I saw Roberto Alagna in the role at the Met and he is heir to Pavarotti and what an actor...my favorite tenor.
it is a shame that Muti will no longer perform at the met. he has a house in puglia where i do also, spending 3 to 4 months a year here. i wonder if he reads reviews....please maestro come back to the met!
続きを読む
1人のお客様がこれが役に立ったと考えています
レビュー を日本語に翻訳する

operamaryc
5つ星のうち4.0 Good Don Carlo.
2001年8月14日 - (Amazon.com)
Amazonで購入
I still prefer The Met production with Domingo, however, I bought this for Sam Ramey's performance as King and certainly wasn't disappointed! He was great! Dessi was a pleasant surprise as Elizabetta! Enjoyed her performance very much! Pav is much better than usual, thinner and more animated. It was well known that his voice cracked on a high note during one of the performances of this run without anyone mentioning the thousands he has hit and, of course, the audience booed. If it was during this one, they fixed with dubbing. Why any major stars put up with the audience behavior at La Scala and Muti's tantrums is still a mystery. The only weak voice was Cano's as Rodrigo - too much vibrato for my taste but his acting was acceptable. Sets were grand if somewhat lifeless. The costumes were beautiful but somewhat colorless which gave the whole effect a dark and somber look. The minor characters were well sung and the orchestra sometimes too loud but colored nicely and chorus sounded just fine. Enjoyed it as a different version when I'm tire of watching The Met and the French verson from the Chatelet in Paris. Both of which I rank above this one. A definite good buy if Pav and Dessi fan and a "must have" if you love Ramey! I look forward to sharing it with friends who haven't seen it and consider it a worth addition to the collection.
続きを読む
45人のお客様がこれが役に立ったと考えています
レビュー を日本語に翻訳する

Renato Baserga
5つ星のうち4.0 Pavarotti sings Don Carlo
2015年5月4日 - (Amazon.com)
形式: DVDAmazonで購入
A Pavarotti Don Carlo....I always admired Pavarotti, and I never understood the hate that so many critics had for him. He not only sang very well, but he always had a lovely legato, and his diction was so perfect that one never needed a libretto to follow him. This Don Carlo is in Italian, La Scala edition, which is t he first Italian edition of Don Carlos. As such, it does not have act 1 at all, which is a little bit of a nonsense, as one really does not realize (or does too late) why Don Carlo is in love with Elisabetta. Well, it's La Scala's first edition and it was made like that, the 2nd Italian version (from Modena) had a shortened act 1 (from the original French). I like the French version, but this is a good one. Pavarotti is Pavarotti, Dessi is OK, and Samuel Ramey is an excellent Philip. No five stars because it is La Scala's edition, but 4, oh, yes.
続きを読む
2人のお客様がこれが役に立ったと考えています
レビュー を日本語に翻訳する