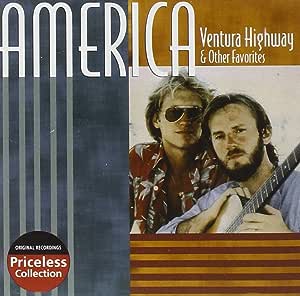 Ventura Highway and Other Favourites インポート

Peps
5つ星のうち1.0 NOT ORIGINAL RECORDINGS like stated on CD/Wasted Money again
2010年7月13日 - (Amazon.com)
Amazonで購入
CD states on front "ORIGINAL RECORDINGS", which is a LIE!!!
This measly 10 track collection has America's FOUR BIGGEST HITS "LIVE" "Ventura Highway", "I Need You", "You Can Do Magic" & "The Border" ARE ALL LIVE RECORDINGS.

I figured from the previous review the two tracks mentioned Live were on Warner Bros. label "Ventura Highway" & "I Need You". It was no surprise due to cross licencing that the Warner Hits were "LIVE", But since the label on THIS CD was Collectables/Cema-EMI (A Subsidary of CAPITOL RECORD LABEL) THERE WAS NO REASON FOR "YOU CAN DO MAGIC" & "THE BORDER" BEING THE LIVE RECORDED VERSIONS. Other than being CHEAP & A RIP OFF.

WHY CAN'T THE RECORD MANUFACTURERS STATE ON THE CD WHICH TRACKS ARE LIVE?? (NO MENTION ANYWHERE ON THE CD COVER OR INSERT)!!

COLLECTOR'S NOTE: If you are searching ONLY for the minor Hit singles "All My Life", "All Around" & "Right Before Your Eyes",
You MIGHT want this, THEY ARE THE STUDIO RECORDINGS. Otherwise STAY AWAY!!!

America's Hit years were prime 1972-1976 on Warner Bros. label with 13 Top Pop/Adult Contemporary Hit singles. A Minor #56 hit of California Dreamin' in 1979 on American International Label sandwiched in between their 2nd minor resurgence from 1979-1984 with 2 Top Pop Hits which is included in the 7 Adult Contemporary Hits which were on the Capitol Record Label.

octavio nahum hernandez camargo
5つ星のうち5.0 I loved the border version !
2015年7月19日 - (Amazon.com)
I bought this cd to bringing it on my car , but the border live version let me jawopen ! The sound of the guitar is very powerful, in fact I bought again a copy for my personal cd collection , just to hear "the border live" over and over !
続きを読む
1人のお客様がこれが役に立ったと考えています
レビュー を日本語に翻訳する

Brian Sherwood
5つ星のうち2.0 Don't Get Fooled Like Me!!!!!
2000年9月23日 - (Amazon.com)
The songs on this CD are ALL LIVE. If that is what you want, then this CD might be for you. If you want the studio versions of "You Can Do Magic", "The Border" and "Today's The Day", you are better buying "Encore- More Greatest Hits" on Rhino Records.
続きを読む
15人のお客様がこれが役に立ったと考えています
レビュー を日本語に翻訳する
Amazon.comのカスタマーレビューを見る(3) 5つ星のうち3.1
Amazonプライム会員ならお急ぎ便、日時指定便が使い放題
さらに、映画もTV番組も見放題。200万曲が聴き放題 。クラウドに好きなだけ写真も保存可能。
> プライムを無料で試す