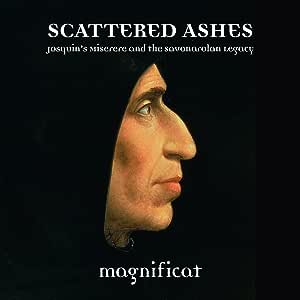 David Keymer
5つ星のうち5.0 EXQUISITELY DONE MUSIC FROM THE GOLDEN AGE OF CHORAL MUSIC
2018年1月22日 - (Amazon.com)
Amazonで購入
Sixteen voices, from soprano down through bass, performing glorious Latin-texted choral music from the sixteenth century -that's Magnificat, the English vocal ensemble formed and led by conductor Philip Cave. The pieces on this album all relate in some way to the God-embracing, earth-eschewing meditations of the Dominican monk Girolamo Savonarola, whose fiery sermons led first, to the expulsion of the Medicis from Florence in 1494 and the purifying of the city of all earthly vanities, then four years later to the city turning against the monk and handing him to the Church to be burned as a heretic. The composers represented here include some of the leading composers of their age: Josquin des Prez (d.1521), Giovanni da Palestrina (d.1594). Claude Le Jeune (d.1600), Orlando de Lassus (d.1594), Jean Lheritier (d.1552), Nicolas Gombert (d.1560), Jacobus Clemens non Papa (d.1555/6) and William Byrd (d.1623). Played straight through in one batch, this music can seem pretty much of a sameness but listened to separately, one piece at a time, individual beauties appear. A single voice will enter, then a second in countervoice, then multiple voices sometimes in harmony, other times multiple lines. The volume swells, then dies. Voices fade in and out. Pieces end in harmony or unison, almost hum-like in their sound. It's lovely music and I for one can't seem to get enough of it. Recorded at St. George's Church in Oxford in 2015, this album was released the following year to celebrate the twenty-fifth anniversary of this quietly spectacular vocal ensemble.
続きを読む
4人のお客様がこれが役に立ったと考えています
レビュー を日本語に翻訳する

Stephanie A. Mann
5つ星のうち4.0 History and Music: Misery and Music
2017年3月29日 - (Amazon.com)
Amazonで購入
I am not a music critic so I cannot judge the performances on this CD according to a professional jargon; my response is emotional and/or devotional. The 80-plus minutes of this music, all dealing with psalms or prayers of misery and mercy, is spread over two CDs. The recording compiles great Renaissance polyphonic renditions of Psalm 50 and 30 with Fra Savonarola's meditations on those prayers for mercy, written while he was in prison before his public execution for heresy.

If nothing else, this CD set introduced me to Josquin des Prez's Miserere which is so different from the Allegri Miserere with all its secret cache. With its haunting repetition of the prayer "Miserere mei, Deus" throughout the text of the psalm, it is quite effective. I enjoyed the variety of polyphonic styles on the first disc most of all, but the entire set is perfect listening for Lent. The liner notes are excellent, providing an overview of European court history and highlighting William Byrd's version of one of Savonarola's prayers, Infelix ego in the context of Recusant England. Beautiful!

Ray
5つ星のうち5.0 Exquisite, Sublime, Haunting ...
2016年3月12日 - (Amazon.com)
With stunning clarity and a pinnacle of human performance, this album, already the recipient of a slew of highly positive reviews by some of the most prestigious institutions that conduct such reviews, this album is truly an amazing piece of art. The performances are so good, and the sonics so well proportioned, that you almost feel like you are floating in air by about the first half-minute of the first track. Its feel is haunting, mesmerizing, almost hypnotic in effect. Another amazing recording job by Linn Records (no surprise there), this recording surpasses the normal limits of recorded sound and transforms one into an other-worldly place of sound, echoes, resonance, and sublime recitation of Latin text to achieve something that is truly unique in recorded music. The album itself is short, consisting of only seven tracks (each by a different medieval composer), some of it's background information lost to history, but it doesn't matter. The music is almost "spectral" in nature: it floats, it intones, it weaves a texture of overlapping vocal sound that you have to hear to believe.

I purchased the "studio master" version (24bit 192kHz) of the recording directly from Linn Records, but the CD version--particularly if it is listened to with a good audio system, or ripped into lossless format and played through a digital player--will yield nearly equal results. "Mesmerizing" is the word that keeps coming back to me, but it is haunting, introspective, and meditative all at the same time. It takes us back to another time, to almost another world, and is truly unique in both its impact and quality.

I feel foolish saying "five stars," because this recording is so much more than that. Put on your best headphones and player, close your eyes, and start the performance, and see if you don't have the exact same experience. A truly amazing achievement of both performance and technical recording, you've got nothing like it in your library.