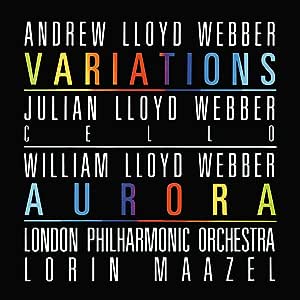 Mikicellist1975
5つ星のうち5.0 It all started with a football bet
2014年4月5日に英国でレビュー済み
Amazonで購入
"Variations" is an excellent example of classical music and rock fusion. After losing a bet on a Leyton Orient football match, Andrew Lloyd Webber composed the work for his brother Julian in 1977 and based it on Paganini's 24th Caprice, to which Andrew added 23 variations for cello and rock band.
I sometimes see comments on the Internet by people saying Julian is famous only because he is the brother of Andrew Lloyd Webber. That is unfair and can't be true. The age gap between the brothers is only about 3 years, I think. Their careers started pretty much simultaneously but they soon took very different directions. Surely they must owe some of their talent to the musical genius of their father, composer William Lloyd Webber, and to the musical environment they grew up in. But when we come to listen to Julian's recordings or live performances, whose brother or son he is is irrelevant, he is an extraordinary cellist who plays with impeccable accuracy and incredible passion, which he communicates very well with the audience.
The second work on this CD is "Aurora", a tone poem for orchestra composed in 1951 and arguably one of the best of William Lloyd Webber's works. It recalls the styles of Delius, Sibelius and Rachmaninov yet the result is quite different from any of the others. Aurora was the Roman Goddess of the dawn, arriving from the East in a chariot of winged horses, dispelling night and dispersing the dews of the morning. The music attempts to portray the inherent sensuality of her nature. If you like Aurora, try "Invocation", a beautiful collection of some of William Lloyd Webber's best works, including Serenade for Strings and the sublime "Benedictus", a work for violin and organ written for him and his wife Jean - a violin and piano student he had met at the Royal College of Music - to play at their wedding service in 1942.

G. S. Fazakas
5つ星のうち4.0 Aurora classical Variations
2005年9月26日にアメリカ合衆国でレビュー済み
Amazonで購入
Sooner or later there would be an orchestral version of Andrew Lloyd Webber's Variations which he composed for his brother Julian and various rock musicians. You must be a die-hard fan to get this version as it is a solely classical arrangement for cello and orchestra. Coupled with their father's symphonic tone-poem "Aurora" it is a lovely and warm disc. The arrangement for the orchestra is well done.Tone colours off course now vary from the various electric instruments used in the original and that's why it only gets 4 stars.The concept behind the original variations was for cello with rock band and the spontanaity of the first disc is somewhat lost. However it is still and excellent recording and should boost the repertoire for solo cello and orchestra much.
続きを読む
4人のお客様がこれが役に立ったと考えています
役に立った
フィードバックを送信中...
フィードバックをお寄せいただきありがとうございます。
申し訳ありませんが、お客様の投票の記録に失敗しました。もう一度試してください。
違反を報告
レビュー を日本語に翻訳する

Damien Slattery
5つ星のうち4.0 Nice recording
2009年6月25日にアメリカ合衆国でレビュー済み
Amazonで購入
The original VARIATIONS instrumentation of electric guitars and 70s synthesisers has not aged well, so it a pleasure to have this symphonic arrangement. The orchestrations by David Cullen are acceptable but never outstanding, one of the original variations has been dropped (not missed) and there is some new counterpoint. Considering Lloyd Webber has claimed VARIATIONS as one of his favourite compositions, it is a mystery that it has not been recorded or re-arranged since this 80s version.
The addition of his father's composition of AURORA is interesting and gives an indication of how the family genes have music in the blood.